Notwithstanding the extraordinary performance of East Riding of Yorkshire Council Director of Planning & Economic Development, Mr Alan MENZIES, when interviewed by BBC Look North’s Caroline BILTON, it now comes to light that (according to Bridlington Golf Club’s own web-site), the freehold of the land known as the 16th hole was actually transferred back to the Club last year – in 2017. (Note the tense of the verb in the final sentence). 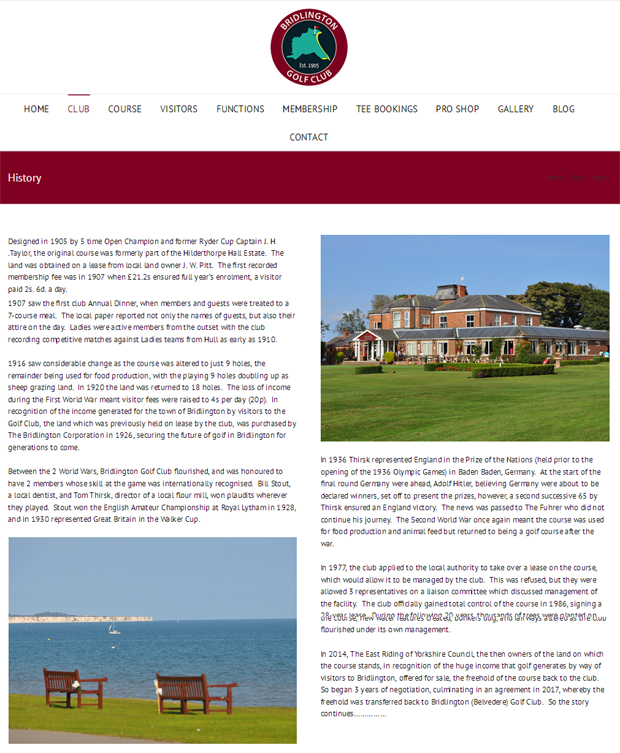 However, since I saved the above screenshot of the ‘History’ page on the Golf Club web-site, that definitive final paragraph has been removed.

The transaction was clearly seen, at that stage, as a ‘done deal’. If so, it would appear finally to have taken place some three years after the decision to purchase the land was unanimously agreed at an Extraordinary General Meeting (EGM) of the Bridlington (Belvedere) Golf Club held on Thursday 31st July 2014. If it ever took place at all . . .

The “then owners” of the Golf Course were, of course, the people of East Yorkshire – as represented by East Riding of Yorkshire Council.

The minutes of that 31st July 2014 EGM make interesting reading.

Towards the bottom of Page 1 of the minutes, it is stated:

“During the talks the Council asked if we had ever thought of buying the Golf Club.”

The Council (ERYC) was represented at the EGM by the Leader, Councillor Stephen PARNABY [Con.] and the Director of Planning & Regeneration Mr Alan MENZIES. This, too, is confirmed in the minutes.

The minutes also record that the Council’s ‘asking price’ for the entire golf course was £750,000 – a sum significantly less than the £1,650,00 which the Golf Club proposed to accept from Ashcourt Properties Ltd [Co.No. 03146261] for a strip amounting to less than one-twentieth of the 18-hole course, thus benefitting the Club by £900,000 profit from the swift re-sale of the 16th hole, virtually from one day to the next – PLUS leaving the Club sat on a gold mine in terms of potential future development proposals for the entire course.

A Mr J. BROMPTON is recorded as expressing some curiosity as to why the Council did not sell the land directly to Ashcourt Properties Ltd for £1,650,000, thus cutting out the middleman – Bridlington (Belvedere) Golf Club – and directly benefitting the taxpayer – PLUS leaving the Council sat on a gold mine in terms of potential future development proposals for the entire course.

The Enquirer’s independent financial advisor estimates the development value of the entire 3.5 acre site in the £18M–£25M price range. Quite why ERYC was willing to sell it to the Golf Club for £750,000 defies comprehension.

The EGM minutes state that Mr David DOWSON (Club Accountant) advised on some financial implications (not specified) and the Chairman stated that, as ‘sitting tenants’, the Golf Club were “the only people who could purchase the Club and sell off any of the land“. But the land was in the public ownership. Unless the Club’s lease included a ‘first refusal’ option, surely the Council must have held a legal duty to invite tenders?

Interestingly, over a year ago – on 25th January 2017 – Ashcourt Properties Ltd changed its Registered Office address from Medina House, 2 Station Avenue, BRIDLINGTON, East Yorkshire YO16 4LZ to an address in Foster Street, HULL.

Coincidentally, Medina House, 2 Station Avenue, BRIDLINGTON, East Yorkshire YO16 4LZ is the address of the Registered Office of Lloyd Dowson Chartered Accountants, Bridlington’s premier accountancy firm headed by Mr David DOWSON – seemingly the man referred to in the minutes as “Mr David Dowson (Club Accountant)”. Nothing the matter with that . . . or?

The following motion was carried unanimously:

“To purchase the Bridlington Golf Club, associated buildings and Car Parks. To facilitate this, the sale of 3.5 acres of land know[sic] as the 16th hole”.

Thus, it is clear from the minutes that the Golf Club agreed to purchase the entire 18-hole golf course and ancilliary properties for £750,000 and sell on only the (short) 16th hole for £1,650,000. The Club’s web-site at first confirmed that the deal had been complete in 2017 – though that assertion has since been withdrawn. Small wonder that ERYC Councillor Andy STRANGEWAY [Ind.] and others have questioned how this transaction could possibly represent ‘best value’ for East Riding taxpayers who (not unlike the taxpayers of the Borough of Scarborough in relation to the Benchmark Leisure Ltd/Marstons lease transactions) would appear to have been at risk of losing what the Golf Club stood to gain. Nothing the matter with that . . . or?

“They [ERYC] dispute the fact that the idea to sell the land came from them; they say the Golf Club approached the Council asking to buy the land.”

Mr MENZIES response was, at best, ambiguous – at worst, evasive. That is to say, he neither confirmed nor denied Ms BILTON’s suggestion that it was the Council who first made overtures to the Council to buy the land, limiting himself to the assertion that the meeting itself took place at the Golf Club’s request – though, clearly, the EGM was convened to finalise arrangements and no other purpose, not to raise them for the first time:

Since the sole Agenda Item was to discuss and vote on the purchase of the golf course land, Mr MENZIES attended for no other purpose. Could Mr MENZIES have inadvertently disclosed that it was not only the meeting but the purchase itself that was at the Golf Club’s request – in which case, he has contradicted the written record of the EGM of 31st July 2014, in which it is stated quite unequivocally that:

One wonders whether or not Mr MENZIES received a copy of the EGM minutes and, if so, what steps he took to have them corrected, thus ensuring a true record.

A full transcript of the Look North clip is available here.

“Recent events have brought into question the lack of transparency and questions are being asked over value for money. The public have a right to know how the council’s assets are being managed and that officers are obtaining best price for any deals. Our residents also need to be assured that officers are not selling off the family silver.”

If the Officers (and/or Councillor PARNABY) have been “selling off the family silver”, then it has not been to the benefit of the residents of East Yorkshire. Rather, it has been to the massive benefit of the members of the Golf Club – who thus may have felt that they owed a commensurate debt of gratitude to Officers/Councillors. Nothing the matter with that . . . or?

But the Council is now claiming that the deal was never completed and the Golf Club has allowed a three-year option to purchase to expire without completion.

I can now report that BBC Look North has taken another look at the Golf Club furore.

Particularly noteworthy are these two paragraphs:

“Planning officers had recommended refusal because the golf course had not been allocated for any new housing under the council’s recently-adopted Local Plan.

The proposed housing development, together with a small hotel, was given the go-ahead by the council’s planning committee last year on the casting vote of chairman Councillor Phyllis Pollard.”

Readers may recall that Councillor Phyllis POLLARD [Con.] is the lady of whom Leader Councillor Stephen PARNABY is alleged (by former close friend and present antagonist, Cottingham developer Peter ROBINSON) to have said:

“A lovely lady but she doesn’t know what day it is”.

Councillor POLLARD has reportedly also been described as “one of Parnaby’s henchpersons” and “Papa Parnaby’s Pawn”.

Be that as it may, the deal seems to have ‘gone pear-shaped’. Nothing the matter with that . . . 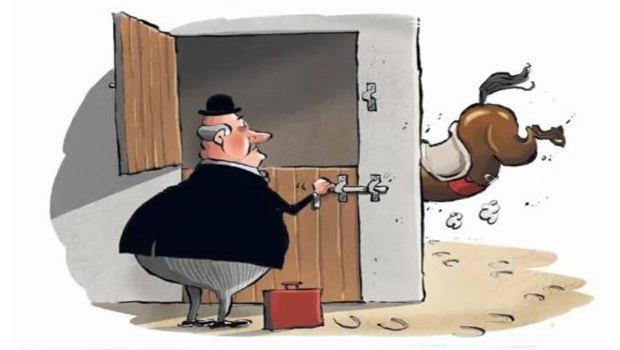