Prompting the ‘Search’ function here on the Enquirer with the search criterion “Mike+Cockerill” reveals a large number of occasions (69) upon which the SBC Portfolio Holder for Project Leadership, Assets, Harbours and Coast & Flood Protection, Councillor Mike COCKERILL [Ind.Ind.] has merited mention.

Sadly (but perhaps unsurprisingly), the overwhelming majority of Councillor COCKERILL’s appearances in the Enquirer have almost invariably centred on robust and well-justified criticism of his behaviour.

Councillor COCKERILL’s gullibility (I smile as I type the word) in regard to the absurd theory that gull and/or dog poo is the principle ingedient causing Bathing Water Quality (BWQ), or lack thereof, to have declined – in Scarborough South and North Bay – to the point where the east coast’s premier seaside resort has lost both of its vital ‘Blue Flag’ ratings. It is almost as though he is reluctant to upset certain parties (who I will not name here, on grounds of ‘commercial sensitivity’).

Many Town and Parish Councillors, as well as members of the public, have complained of Councillor COCKERILL’s refusal to enter into any sort of dialogue with anyone who takes issue with his pronunciamenti. Also widely deplored is the arrogance with which he terminates any attempt to arrive at a reasonable accommodation. Many (myself included) have often been unable to elicit so much as an acknowledgement – much less a response – from him.

Readers will recall that his dismal failures as Chair of the Whitby Harbour Board, far from relegating him to the back benches, were rewarded by promotion. Some observers have concluded that Councillor COCKERILL must occupy a special place in the Leader’s heart. Others infer only that the Leader is unable to identify a worthy replacement – which is easy enough to believe.

Councillor COCKERILL’s pièce de résistance, of course, was his use of the “N-word” during a meeting of Filey Town Council (FTC) in January 2015. Would he have apologised without the Enquirer’s coverage? I think not.

Before proceeding, I would like to set out some procedural requirements:

1) The ‘Public Participation’ segment of the meeting requires the suspension of Standing Orders, which are re-instated after members of the public have been granted up to three minutes each in which to address the Council, through the Mayor (Chair), Councillor Richard WALKER, for a maximum total of fifteen minutes.

2) Councillor COCKERILL, though no longer a member of FTC, is a regular attendee at FTC meetings in his capacity as a Scarborough Borough Councillor delivering a monthly report. Irrespective of whether Standing Orders have been suspended or not, any contribution made by Councillor COCKERILL must be at the invitation of the Mayor.

3) Under no circumstances may a member of the public – or a reporting Borough Councillor – speak without the invitation of the Mayor or directly address any attendee (Councillor or otherwise) other than through the Mayor (Chair).

4) On election to a Council (any and every Council), these requirements are made know to newly-elected Councillors. Councillors of lengthy experience – and I include Councillor COCKERILL – are aware of these rules, as second nature, and their necessity to the maintenance of good order in meetings. As a former Mayor of Filey (1994-95), Councillor COCKERILL cannot be unaware of the regulations. This knowledge has not prevented him from engaging in a slanging match with a member of the public – and the Mayor – across the floor of the Council Chamber.

Thus, to see an experienced Councillor (who has ‘served’ at Town, Borough and County level for donkeys’ years) behave in Full Council in a manner way beyond the pale, is to witness a choleric buffoon whose arrogance sets the measure of his bottomless contempt for the taxpayers, whom he has had the undeserved honour and privilege to serve for far too long now.

Regrettably, I must note that (at the time of writing) the official FTC video of the meeting of 14th March 2018 has been watched a mere 27 times (though, hopefully, the Enquirer will attract more). This would suggest that, by the time of the next local elections (May 2019), very few Filey electors will be aware of Councillor COCKERILL’s clearly-demonstrated unfitness for public office. One tries to educate.

It would appear to me that Councillor COCKERILL has a case to answer in respect of a number of possible breaches of the SBC Councillors’ Code of Conduct: 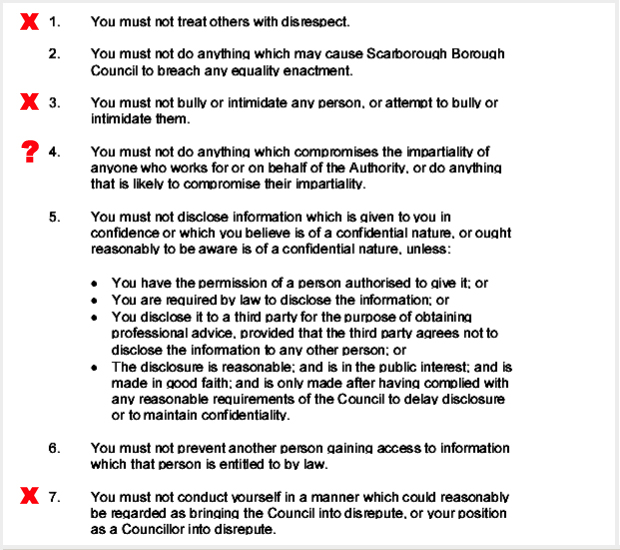 Naturally, I would have preferred to have solicited Councillor COCKERILL’s ‘right of reply’ before submitting this article for publication, but my emails are victims of the SBC Deputy Monitoring Officer’s email interception regime and Councillor COCKERILL appears to have blocked me on his private email address, so I can address him only in the public domain. So be it.

Time to resign, Councillor COCKERILL. In my view, you have neither the intellect, the humility, the temperament nor the self-control for public service.