For more than twenty years now, Hollywood film producer Harvey WEINSTEIN (65) has been dogged by rumors of sexual harassment and assault.

In the past weeks, we have seen an avalanche of allegations of sexual harassment – and much, much worse – against Mr WEINSTEIN; this Elle magazine list of Mr WEINSTEIN’s accusers is already out-of-date.

Let us consider now the spectrum of what may reasonably be termed “sexual harassment”. Towards the upper end of the spectrum, no reasonable human being could fail to condemn the kind of conduct alleged in the WEINSTEIN case – always granting the presumption of innocence.

It is at the lower end of the spectrum that opinions may vary. A remark, from one person to another – either verbally, or in a text or email – along the lines of “I thought you looked very elegant at the presentation this evening” – may be an innocent and well-deserved compliment. Or it may be a subtly tentative opening gambit in a premeditated course of conduct instigated by the speaker/writer cynically to inveigle a way first into the other person’s good opinion, then confidence, then affections – always with a view to a sexual conquest.

How can it be possible to set a realistic and universally applicable threshold for “sexual harassment”?

Clearly, motive is a fundamental ingredient.

So I come now to a pair of allegations of “sexual harassment” against Councillor Andy STRANGEWAY [Ind.], of East Riding of Yorkshire Council (ERYC), passed to me by an ERYC source whose conscience has baulked at what has been described as “a politically motivated stitch-up”. 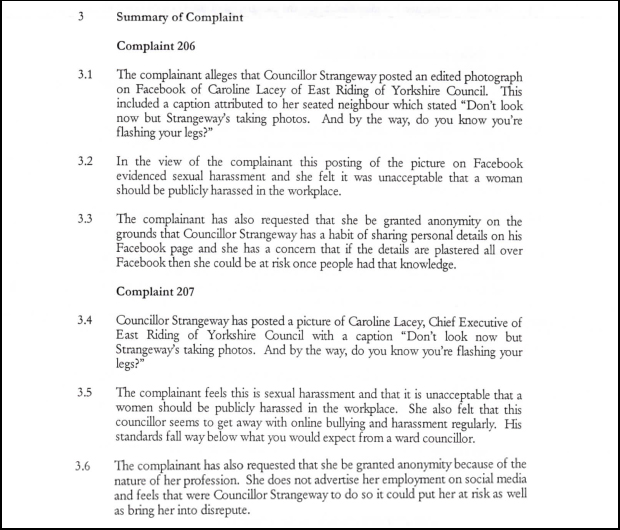 Let us now examine those allegations.

In essence, the Complainants are alleging that the publishing, on a private blog (on which a Disclaimer is prominently displayed: “Opinions and statements published on the ‘Andy Strangeway Independent’ blog are those of the owner, Andy Strangeway, private individual, and not those of Councillor Andy Strangeway, elected member of East Riding of Yorkshire Council” – therefore outside of the Council’s jurisdiction), of a satirical Photoon, based on a legally-taken photograph uploaded to the internet in Andy STRANGEWAY’s own home 25 miles from Mrs LACEY’s workplace, constitutes “sexual harassment in the workplace”, insofar as the embedded text makes reference to the fact that her legs are visible. Shock, horror!

Neither of the Complainants is the butt of the satirical Photoon. Neither has any legitimate personal reason to complain. Yet their allegations, if untrue, constitute a cold-blooded libel and risk possible criminal charges under the Malicious Communications Act 2003.

Factually, there is nothing pejorative in commenting on the fact that, in the photograph, Mrs LACEY’s legs are visible, just as are Councillor Jonathan OWEN’s though there has been no Complaint that Councillor OWEN has been “sexually harassed”, though in these days of gender equality, it is clearly the case that innuendo of a sexual nature, if it were to exist, may be directed from one man to another man on an equal footing with the same remark directed from a man to a woman, or a woman to a man, or a woman to another woman.

This is called ‘gender equality’. In fact, there is no sexual element of any kind in the assertion that the legs of either Mrs LACEY or Councillor OWEN are visible in the photograph. It is self-evident that both individuals are human beings who do have legs, and indeed both pairs of legs are visible, whether commented upon or not.

Neither Complainant has, or can have, direct knowledge of the degree, if any, to which Mrs LACEY suffered “fear, anxiety and distress” (the threshold for “harassment” of any kind) as a result of the publication of the satirical Photoon. Indeed, as a prominent public official, Mrs LACEY has tacitly accepted that she is in the public eye and can expect, from time to time, to have her photograph taken and face the spotlight of public criticism and/or satirical comment. In consideration of her duty to bear this heightened exposure to scrutiny she is extremely well remunerated.

Moreover, 66% of Hull Daily Mail readers (sample: more than 500, less than 1,000) who took part in their on-line poll saw no sexist element in the Photoon. For 53 years now, Private Eye magazine has adorned its front covers with Photoons – some far more risqué than a casual reference to the ‘flashing’ of legs. Obviously, Photoons are, in and of themselves, incapable of constituting “sexual harassment”. They are ‘funnies’. The Photoon in question certainly gave me a good chuckle; I delight in seeing pomposity deflated.

In any case, Andy STRANGEWAY has personally apologised to Mrs LACEY, without admitting wrongdoing, and she has accepted his apology.

And Andy STRANGEWAY has also acceded to Mrs LACEY’s request to delete the Photoon – even though it is presently available to the public gaze on the Hull Daily Mail website (here) as well as on the Yorkshire Post website (here), where it has enjoyed inspection by a readership in the order of a thousandfold Andy STRANGEWAY’s little blog. Having accepted an apology and an unconditional offer to delete the Photoon, it is a little late for her to claim further redress. Case closed. Yet without her evidence, the present Complainants cannot surmount the first hurdle.

Besides, if references to the ‘flashing’ of legs by people in the public eye even approached “sexual harassment”, then the first page of this Google Search for “Flashing your legs” clearly suggests that the Daily Mail will never be out of the coutroom. Each of the following household names has been reported ‘flashing’ her legs:

Here is a screenshot of the first page of a similar search on Google Images:

Self-evidently, press reference to (and photographs of) public figures ‘flashing’ their legs is a commonplace in our enlightened society, even in these times of PC extremism. Far from the deeply distressing experiences of Mr WEINSTEIN’s accusers, there can be no serious suggestion that the young women pictured above have suffered “sexual harassment” merely from the effects of being photographed and the photographs having been published into the public domain.

Moreover, at the time of writing, neither the Hull Daily Mail nor the Yorkshire Post has deleted the ‘offending’ Photoon or published an apology to Mrs LACEY, either on request or under any kind of duress or leverage. Are these nespapers also to be charged with “sexual harssment”?

Regular readers will no doubt recall the “Undercover & InfoWars in Yorkshire” article published here on the Enquirer under the by-line of Tim HICKS. It offers a well-documented summary of the techniques employed by public authorities in our area to silence criticism and protect particular individuals from exposure. Readers will be quick to recognise what is going on here. The Lakeminster claim is grounded in alleged Misfeasance in Public Office. In the firing line are:

In my view, those flimsy and thoroughly odious allegations against Andy STRANGEWAY, made by two parties with no direct interest in Mrs LACEY’s putative “fear, anxiety and distress”, and who have prevailed on Monitoring Officer Mathew BUCKLEY to preserve their anonymity (though my own recent ‘test’ request for anonymity was denied – I like to get things on the record – why the double standard?), have no substance whatsoever.

Furthermore, they trivialise what is inevitably a deeply traumatic and life-changing experience for victims/survivors of real sexual harrassment:

The possibility that the individuals behind these frankly pathetic Complaints are motivated by personal malice and/or in compliance with politically motivated overtures from Conservative Councillors and/or Council Officers who are horrified by Andy STRANGEWAYS exposure of all manner of wrongdoing (witness the Peter ROBINSON allegations against Leader Councillor Stephen PARNABY [Con.], and the opening moves in a Lakeminster civil action of Misfeasance in Public Office against PARNABY and eleven others) looms very large indeed.

It is noteworthy too – and procedurally quite wrong – that the same Mathew BUCKLEY, Head of Legal & Democratic Services and Monitoring – third from the top of the list of those named in the Lakeminster Letter of Claim and himself the subject of at least two very serious Formal Corporate Complaints – has permitted himself to take part in these Complaints against Andy STRANGEWAY when he (BUCKLEY) so clearly has a personal, prejudicial and ultimately pecuniary interest in silencing him.

It is a Decision that may take a good deal of explaining to a High Court Judge, or to the Solicitors’ Regulation Authority – but by that time, who knows in what circumstance Mr BUCKLEY may find himself?

All of the foregoing STRONGLY suggests that Andy STRANGEWAY has been singled out for ‘special attention’, just as the Enquirer contributors (who exposed former Scarborough Mayor, Councillor and Alderman Peter JACONELLI as a predatory paedophile and co-member, with Jimmy SAVILE, of the Scarborough paedophile ring, as well as a large number of less despicable miscreants) were the subject of ‘special attention’, in the form of threatened and actual legal actions (unsuccessful – we are currently publishing more than ever before). 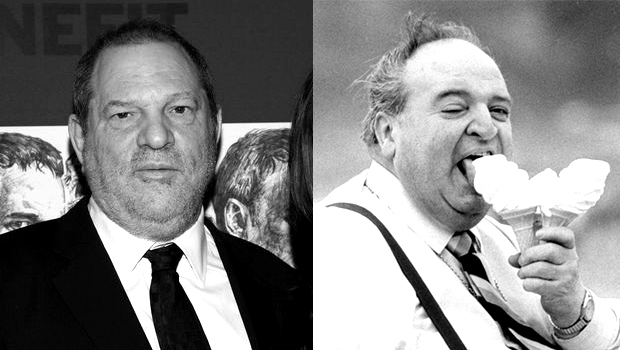 What this Decision does signify to me is that there is a now a dirty and determined campaign being waged in an attempt to discredit anti-corruption campaigner Andy STRANGEWAY and to stifle his exposure of the many impending Planning and Child Safeguarding allegations that have been passed to him by victims of impropriety (of one sort or another) who have sought to engage him as their champion. The perpetrators of those improprieties are desperate to ‘frighten him off’ – to drive him out of public life.

In a recent article, I reminded Councillor Stephen PARNABY of the ‘Law of Holes’ (when you’re in one, stop digging).

My suspicion is that it is Councillor PARNABY who is behind these ludicrously artificial  Complaints, and the two nominal Complainants are no more than puppets, perhaps (but I think not) unawares. Mr BUCKLEY, on the other hand, is solely responsible for his own actions and/or omissions, and he cannot expect to please the Nuremburg V defence – “I was just following orders”.

Meanwhile, my sources have provided me with a rich seam of screenshots of imprudent and plainly vindictive Facebook postings and comments from the two ladies pictured below, who (according to a trusted ERYC insider) are mooted to be the most likely to have lodged those determinedly anonymous Complainants. The close similarity of the Complaints, one to another, is certainly suggestive of a high degree of ‘orchestration’. 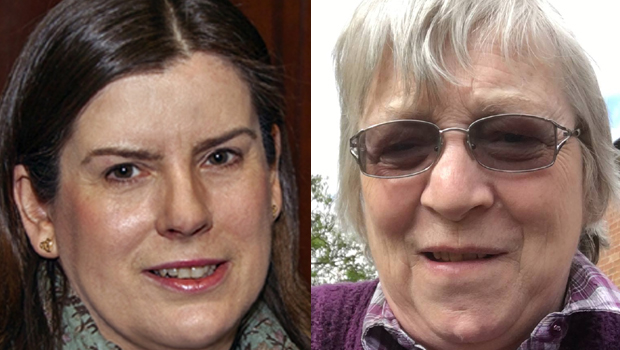 One might have reasonably expected any public authority to embrace upright and strong-minded citizens and Councillors who come forward with evidence of wrongdoing and thank them for the opportunity it presents to turn the ‘bad apples’ out of the barrel.

The depth that certain individuals are now sinking to smear and denigrate anti-corruption campaigners sends out a clear and penetrating message. It resembles the insistent and accelerating staccato buzz of a Geiger counter as it approaches the toxic core of a seemingly (but not so) innocent object.

That object sits at the apex of East Riding of Yorkshire Council and meltdown is now in progress.

[ERYC CEO Mrs Caroline LACEY has been given an opportunity to comment prior to publication of this article but has not done so].