Readers may be aware of the local, regional and national news coverage of a Photoon published by Andy STRANGEWAY on his private blog on 19th September 2017.

The Photoon, based on a photograph taken by Andy STRANGEWAY at the Cabinet Meeting, depicted ERYC Chief Exec Caroline LACEY seated alongside Deputy Leader Councillor Jonathan OWEN [Con.]. A speech-bubble emanating from Councillor OWEN bore the text “Pssst! Don’t look now but Strangeway is taking photos. And by the way, did you know you’re flashing your legs”.

The first key phrase in the above paragraph is this:

Why are these phrases significant?

Readers may remember that I (and others) campaigned for years, finally with success, to persuade my local Whitby Town Council (WTC) to film its meetings and make them accessible to the public on the Council’s website. Some Councillors were fiercely opposed to being placed on the record in this way. Council Minutes are far from verbatim (and often far from a true record).

The campaign was successfully extended to Scarborough Borough Council (SBC), who now ‘live-stream’ web-cast their Council and Cabinet meetings, archiving them on the web-site for public access, here.

This is commendable. True, it has captured some disgraceful lapses (inappropriate outbursts and downright lies), though a stiff dose of public pillory has tended to herd Councillors slowly in the general direction of acceptable behaviour.

But East Riding of Yorkshire Council has lagged behind the trend towards greater transparency in public affairs. ERYC does not ‘live-stream’ web-cast or even record its Council and Cabinet meetings.

In his official Councillor capacity and as a private citizen, Andy STRANGEWAY has been exercising his democratic right (as I have in the past and will no doubt again in the future) to photograph, film, record, ‘live’ Tweet (etc) public meetings for exactly the same reasons that I campaigned for filming at WTC and SBC – for transparency and an exact public record of meetings. This is not subversive and it is not trivial.

It is high time that ERYC ‘live-streamed’ and web-cast its meetings.

To draw attention to his unheard of audacity in taking photographs in Cabinet, Andy STRANGEWAY produced a deliberately border-line ‘naughty’ Photoon. “Naughty”. Not rude. Not smutty. Not obscene. ‘Naughty’. And specifically not “sexist”.

To make clear that the message was not in any way “sexist”, Andy STRANGEWAY published the ‘twin’ to the LACEY-OWEN Photoon, reversing the gender polarity: 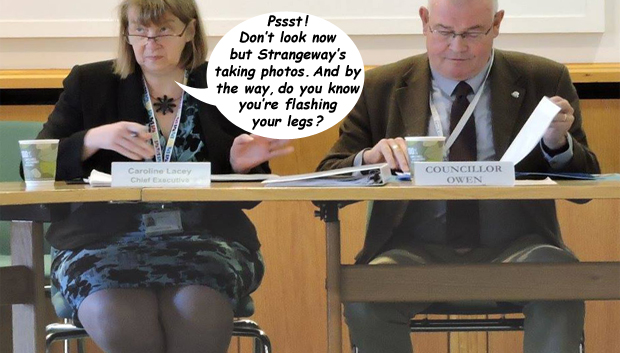 In my view, to suggest that either version is “sexist” is utterly fatuous; every seaside kiosk sells postcards so risqué as to make the LACEY Photoons resemble the vicarage garden party. It is a bit of fun – nothing more than that. Only the most over-zealous, politically correct prude could make any more of it than that.

But it did the trick.

(Incidentally, a ‘straw poll’ on the Hull Daily Mail website, shows 66% (two thirds, nearly) of readers who voted also discount Councillor PARNABY’s “sexist” claim. That is the verdict of the Court of Public Opinion – the people’s democracy).

Not that that matters, because the really significant aspect is this: Councillor PARNABY has taken the bait. And, in my view, he has once again abused his position for personal and political gain in the process. He has forgotten the Law of Holes.

He was not so fast to react to my Open Letter to him (26/06/16), berating his failure to secure an apology from his Tory colleague Councillor DOMINIC PEACOCK, whose deeply offensive remarks about murdered Labour MP Jo COX were in another league altogether than the LACEY “legs” prank. He was not under such pressure then. Now, there are a lot of people ‘gunning’ for him, metaphorically speaking.

In his desperate anxiety to discredit and deter Andy STRANGEWAY, Peter ROBINSON, Willie FLANNIGAN and others waiting in the wings, from disclosing more of the shady side of Stanhope Street, Councillor PARNABY has committed a monumental error.

He has run off at the mouth over a bit of a lark – a mere bagatelle. But he has remained silent on each of the major issues Andy STRANGEWAY has raised.

Let me remind readers that:

So while the rest of us continue to investigate the darker recesses of the PARNABY decades, the Leader himself can only obsess over a ‘naughty’ postcard of Mrs LACEY’s knees. And, for his trouble, he has attracted a swarm of unwelcome media attention. He is in the spotlight now.

And to show that it was nothing personal, Andy has apologised to Caroline, face to face, for any discomfort she may have felt, and he has withdrawn the ‘offending’ Photoon – and, with it, the rug from under Councillor PARNABY’s feet of clay.

The bottom line is [Ed: Dare you say “bottom” in this company?) that what Councillor Andy STRANGEWAY [Ind.] has done is to have publically embraced the single most important precept laid down in Lord NOLAN’s Seventh Principle of Public Life – Leadership:

The vast majority of Councillors lay low and ‘play the game’. By obeying the Whip, they allow themselves to be led – sometimes far from the straight and narrow.

STRANGEWAY will challenge all the way.