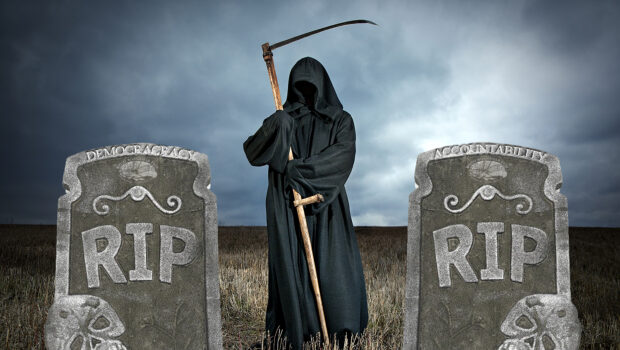 A Letter to the Editor from ROGER PICKSTOCK of Scarborough, giving voice to the popular perceptions regarding the erosion of democracy and accountability in the Borough of Scarborough.

~~~~~
I have not lived for very long in the Borough (almost 5 years), but I believe that it has been enough time to recognise mismanagement and the nefarious workings of the Borough Council and its elected Council members. This is supposed to be a democratic system where each member is accountable for their actions and should be held to account when things go wrong or they transgress the boundaries in which they operate.

My first introduction to the councils’ M.O.D was when I and my wife joined the Save The Futurist group for various reasons both personal and ethical and I was astounded by the methods used to provide a platform for the wishes of just one elected member who totally disregarded the Nolan Priciples (outlined below). The word ‘junta’ was being banded around at the time, a system which is diametrically opposed to democracy.

For me the most interesting phrase is ‘the people have a voice in the exercise of power’. which is then supplemented by the phrase ‘typically through elected representatives’.

In other words, we the electorate go out on election day and vote for the candidate and the promises that they purport to believe in.

We now come to that word promise – ‘an assurance that one will do something or that something will happen’ or ‘an indication that something is likely to occur’ (C.O.E.D).

So, a promise is basically a positive declaration intended to give confidence.

We have a situation here where those elected on certain promises have spectacularly failed in fulfilling those promises and have therefore not only damaged their standing within a democratic system, but have, through either negligence or apathy, severely damaged democracy itself. Through successive terms of office, this total disregard for the democratic processes and the principles in which they are bound have sounded the death knell for democracy in the Borough.

The requirement or expectation to justify actions or decisions.

Councillors are bound by the 7 Nolan Principles of Public Life:-

Ok. So we now have the 7 Nolan Principles defined – principles to which everyone operating within a local/national government environment must adhere, or at the very least provide a reasonable and legal excuse why they haven’t done so.

I believe that on every single point outlined above, SBC Councillors and Officers have failed manifestly.

Could I ask that each one of you reading this letter (if it is indeed published) makes your own decision on how, or even if, Democracy and/or Accountability have been pushed aside to the detriment of the electorate?

I have not named names, because they know who they are. This letter is my view on why I believe Democracy and Accountability are gradually being eroded and eventually may totally disappear from the Borough. Of course, we still have devolution in 2022, which in its own way could be a double-edged sword.

I am a consummate optimist – but where politics is concerned……..