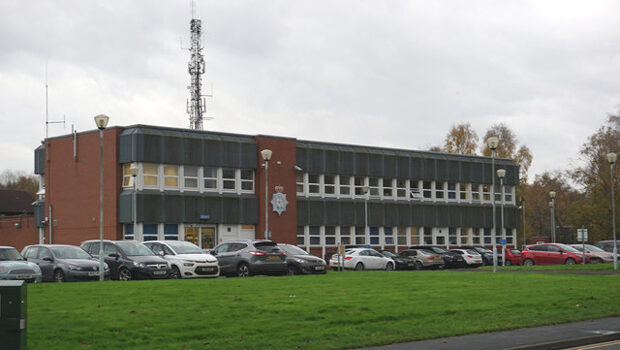 This is the latest in a very popular series of articles on the North Yorkshire Police (NYP) betraying the public confidence and blatantly flouting the COVID regulations, while enforcing them on other people.

In this article, TIM HICKS comments on footage of a PCSO ignoring the COVID-19 guidance at Selby Police Station.

Following the NYE appeal offering a reward for information on police officers breaching the regulations (see below), this video by a blogger who calls himself “News Now Yorkshire” has come to my attention.

The first part of the video shows two PCSOs without headdress in a public place meeting a so called “Auditor/Social Media Blogger” outside Selby Police Station. He was obviously behaving innocently, but looking for a confrontation, hence the title of the article.

Initially, neither PCSO maintained social distancing and PCSO 5729’s face mask was not worn properly, leaving her nose uncovered thereby rendering the face mask completely ineffective. If she had been infected, she risked infecting her colleague, particularly if she went indoors with her mask in this condition.

We should not forget that it only takes one person to get infected and an entire Police Station may have to close:

The NYE has come down hard on police officers that do not observe the Coronavirus regulations. This is because we believe the knowledge that if they breach the regulations, they will be covered on the NYE acts as a deterrent and encourages compliance.

We have noticed far fewer cases of police officers breaching the regulations since we started this campaign and that the NYE’s style of “Tough Love” has improved standards of compliance and, we hope, helped prevent infections amongst North Yorkshire Police.

This is particularly important given the failure of leadership by Chief Constable Winward, who has made it clear that she will not take action against her officers for breaching the coronavirus regulations. NYE coverage here.

People who call themselves “Auditors or Social Media Bloggers” go to places and film in public to see if they get a reaction.

The above video clip is a typical example of people filming – in this case at a Police Station – allegedly for some higher purpose but in reality to provoke a confrontation with the Police, security or members of the public and cause annoyance.

Sad to relate, “News Now Yorkshire” successfully wound up both PCSO’s and succeeded in its objective.

Both PCSOs followed the blogger around and asked for his details. When the blogger politely refused, PCSO 4228 understood that he had no power to demand the blogger’s name and address and did not pursue his request. However, the indefatigable PCSO 5729 -by now very annoyed – did not desist and instead, demanded that he give his details quoting Section 50 of the Police Reform Act as her authority for demanding them.

Persons acting in an anti-social manner

Clearly, photography under these circumstances is not a crime and is not anti-social behaviour, so it appears to me that PCSO 5729 was abusing her position to try and obtain the details of a member of the public, when in fact she had no lawful reason or power to do so. A breach of his civil liberties and Force policy.

Fortunately, the blogger left and PCSO 5729 backed down and did not try to have him arrested, so no harm was done.

This video by “News North Yorkshire” shows an interaction with Police outside Fulford Road Police Station, in which Police Sergeant 414 demands a blogger’s details and, when he does not give them, threatens to arrest him under Section 25 of the Police and Criminal Evidence Act, which no longer exists. The blogger just talks around them and (at 9:08) PS 414 realises he has been defeated, his bluff has been called, he will not get his details and can’t arrest him. Annoyed, he tells the blogger to “disappear”, which he refuses to do. Then the Police Officer leaves and the blogger follows with both parties being insulting to each other. Video here. Again no harm was done.

However, this is not always the case. These interactions with bloggers have the capacity to go seriously wrong for Police Officers involved, if they are not familiar with the law and the National Police Chiefs Council policy on Police interaction with “Auditors/Social Media Bloggers”:

Although I have used these two clips to illustrate the article for the purpose of raising awareness of this issue, I do not agree with this type of journalism/blogging.

The response at Force Headquarters would, I believe, have been improved if the Officers concerned had the benefit of guidance on being filmed in public. Some time ago, I wrote to Chief Constable Winward asking her to adopt a Force policy for interactions with members of the public that were filming the Police.

This seemed to me to be an essential requirement, given the huge increase in video filming on mobile ‘phones and the willingness of the public to film interaction with the Police. However, predictably, she refused to do this, or to adopt the Metropolitan Police policy on filming in public.

Happily, wiser Councils and the National Police Chiefs Council (NPCC) issued a policy on Police interaction with “Auditors/Social Media Bloggers”. It can be read here. The guidance was implemented because of the increasing number of people that are filming the police and is required to be circulated to all Police Officers, as I originally suggested to Chief Constable Winward.

By again circulating this information to our police readers, the NYE hopes it will help prevent any more unfortunate incidents.

Apart from the reference to the Mental Health Act, the guidance seems to me to be a very reasonable guide. It prohibits Police Officers from using terrorism as a pretext to arrest or harass people who are filming them. It also emphasises the ACPO 2010 guidance that the Police have no powers to prevent photography and that good media relations are essential to the Police Service.

The guidance emphasises the importance of remaining calm and professional when interacting with people that are filming them. A textbook example of this can be seen in Part 2 of the Selby video here (at 6:21) where a particularly affable PC1212 demonstrated that he understood the law on filming in a public place and handled his interaction with the same blogger perfectly.

I think that all of the interactions referred to in this article would have gone better, if the Officers involved had been familiar with the NPCC guidance above.