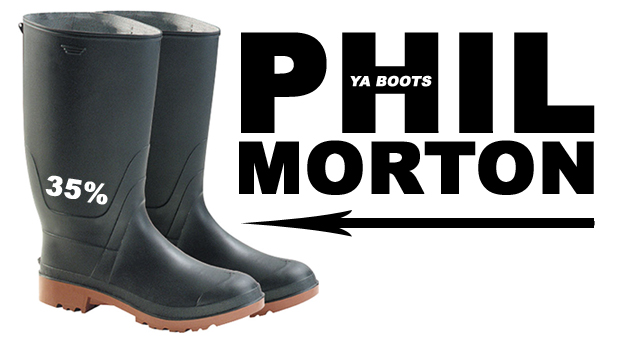 As I write, the North Yorks Enquirer has thus far made only the most cursory examination of the way in which Hambleton District Council has been operating since your internal promotion to your present exalted position as Chief Executive Officer. A 35% salary-increase in the past eighteen months must compound your sense of personal success.

How embarrassing it must be for you now to find yourself caught in the searchlights of a significantly more robust investigation. Happy days.

It was with sadness and disappointment that I took note of your reluctance to provide the courtesy of an acknowledgement (or response) to my email of 11th September 2014. I fear that your reticence leaves both you and your Director of Environmental and Planning Services Micky JEWITT in a most uncomfortable position.

As you will be aware, Micky JEWITT has handed down his verdict on my formal Corporate Complaint against his chum, your Monitoring Officer Gary NELSON. In itself, Micky’s ruling is well within the customary ambit of a provincial public sector Legal Officer’s response to a formal Corporate Complaint, relying (as it does) on the normally efficacious strategy of trawling the statutes for any form of words that can, by contortions, be pressed into service to exculpate the subject of the Complaint. Without, of course, the merest passing regard to the wider ethical context. But then Hambleton District Council does not ‘do’ ethics, does it, Phil?

Local authorities have been slow, even in the metropolitan areas, to adjust to the new era heralded by social media. In the past, a report such as Micky JEWITT’s would find its way, in hard copy, to a solitary complainant incapable of parrying even the most mediocre solicitor’s deconstruction work – invariably with the result of leaving the hapless complainant with no reasonable prospect of achieving a fair and just outcome.

Hot damn! How times have changed!

Today’s complainant may take his/her grievance to the Court of Public Opinion. It is a forum with no affection for pedantry or slippery semantics. The jury – the public gallery – is legion. And uncompromising.

This is an Open Letter; I shall therefore constrain my remarks to only the sketchiest reiteration of the current issues.

Andy and Michelle DOLAN have been very poorly served by their Parish Council – Exelby, Leeming & Newton (ELN). More than that, they have been libelled, verbally abused, ignored and denied democratic process.

It so happened that they became (serendipitously) aware of the NYE‘s wider scrutiny of Parish Councils throughout North Yorkshire. Appalled by the dereliction of statutory duties practised by ELN, I lodged a Freedom of Information Request with ELN which disclosed unrebutted evidence of an utter disregard for statutory requirements.

I pointed out to Parish Clerk Margaret STEAD the extent of her (and her Council’s) inadequacies, with the result that  I was invited – invited, mark you – by ELN Councillors to an Extraordinary Meeting to provide advice to the Council and Clerk on the steps necessary to bring ELN into belated compliance with the law. (Compare and contrast with neighbouring  Well Parish Council – whose web-site is up-to-date and informative, and makes available audio-recodings of Meetings, on-line).

I was greeted by a hastily press-ganged ‘Rent-a-Mob’, so hostile that I and my colleague Nick HENDERSON suffered verbal abuse actively encouraged by one of the (then) Councillors. Local resident Andy DOLAN was physically assaulted.

None of the foregoing accords with the prevailing understanding of democracy, transparency and accountability that we in England have been promised.

I would like to ask you – and I require a response on this point – to whom should abused electors turn in the face of such disgraceful conduct on the part of a Parish Council in the District of Hambleton – even one for whom not one single voter has ever provided a mandate to even one of its members? Willam HAGUE MP? Julia MULLIGAN? Archbishop SENTAMU? The Provisional Office of the People?

But Micky JEWITT feels that his loyalty lies with his friend and colleague Gary NELSON, with whom (perhaps) he shares a common purpose – so Exelby, Leeming & Newton Parish Council may continue in the belief that members may insult the people – and the statutes – with officially approved impunity.

I do not think so. Let me explain why.

It is child’s play to interpret the law in such a way that, though its letter remains intact, its spirit is kicked with a jerk of the knee into the trash can. It is, as I say, child’s play – both childish and foolhardy.

Your Council needs to reconsider its position, Phil. Citizen-journalists are scrutinising its activities ever more closely.

People are scandalised by the opacity surrounding the unconscionable Senior Office pay-rises. You yourself have enjoyed a 35% increase within the past eighteen months.

In the light of the Council’s adoption of the widely-condemned practice of exploitative Zero Hours Contracts for employees at the opposite end of the salary spectrum – 2 market supervisors, 3 admin covers, 155 leisure attendants and coaches and 160 ‘casual’ posts, working without the assurance of any salary at all, let alone a ‘living wage’, you and your close colleagues (Justin IVES, Dave GOODWIN, Micky JEWITT and Marty RICHARDS), with obscene salaries totalling £457,828 – almost £½-million per annum – have made yourselves easy targets for criticism and righteously indignant anger. Out of interest, Phil, what percentage of the total HDC work-force do those Zero Hours Contract workers constitute?

Revelations published in the past few days regarding the extraordinary ‘arithmetical errors’ in the Council’s published accounts, amounting to inexcusable incompetence, at best, and at worst, ‘cooking the books’, go some way to suggesting an explanation for how the Senior Officer pay-rises have been funded. One example identified £566,248.00 travelling in the ‘wrong’ direction; another, £55,689.00 – more than enough to cover those inflated Senior Officer salaries. Fill ya boots, eh?

Skullduggery masquerading as incompetence is far from unknown in the public sector – especially in those rural backwaters where the light of scrutiny has not penetrated for many decades. My, but it is certainly shining now. How will the Senior Officer redundancy packages stand up to inspection?

The non-responsiveness of Council Leader Councillor Mark ROBSON to legitimate questions regarding his part in the Senior Officer salary increases and redundancy packages is another cause for concern. His balance of judgement has been called into question before. Twice.

Is he now expected to put his head on the line again to explain away Officer wrong-doing at Hambleton District Council? 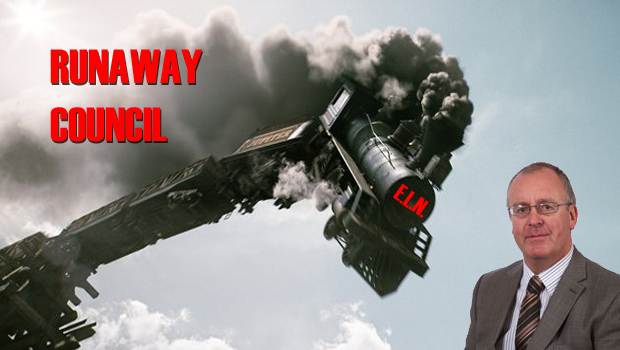 Please make clear to Micky JEWITT and Gary NELSON that, in the absence of a sincere and convincing assurance from them that Exelby, Leeming & Newton Parish Council will be brought immediately into conformity with statutory requirements, I shall pursue my formal Corporate Complaint against Gary NELSON through every stage of the Complaints Procedure – irrespective of my personal conviction that it is NOT FIT FOR PURPOSE – and far, far beyond.

And you should most definitely ensure that Monitoring Officer Gary NELSON pursues the matter of ELN Vice Chair Councillor Dorothy DIXON’s failure to declare her interest in the successful Clapham Lodge Planning Application. 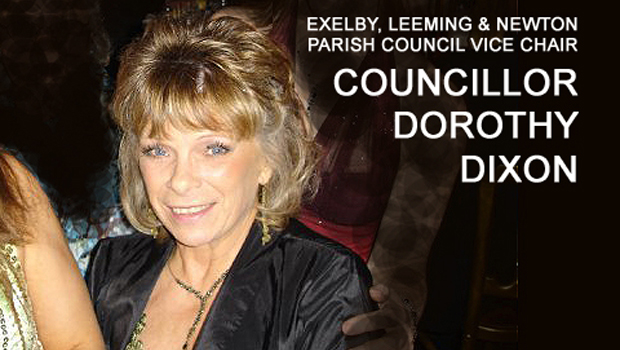 For the avoidance of doubt, the North Yorks Enquirer is not concerned with the conduct of people who are no longer engaged in public life. Only the actions of public servants command our attentions.

Unlike the mainstream press, we take no interest in the indiscretions of members of the public, who may – for all we care – be caught in flagrante delicto bouncing about on their neighbours’ sofas.

That is nobody’s business but theirs – and their respective spouses, of course.

Public servants are another matter.

So my best advice to you is carefully to reconsider my very reasonable invitation to meet with me one-on-one, in Whitby, where together we may (hopefully) carry the Council into a brave new world of transparency and accountability. And good repute.

Please do not by-pass this final opportunity.

“For too long those in power made decisions behind closed doors, released information behind a veil of jargon and denied people the power to hold them to account. This coalition is driving a wrecking ball through that culture – and it’s called transparency.” – [David Cameron]

“If councillors and council officers are to be held to account, the press and public need access to the information that will enable them to do it. If town halls want to reduce the amount they spend on responding to freedom of information requests they should consider making the information freely available in the first place. The simple act of throwing open the books, rather than waiting for them to be prised apart by the force of an FOI, might even save a few pounds in the process.” – [Eric Pickles] 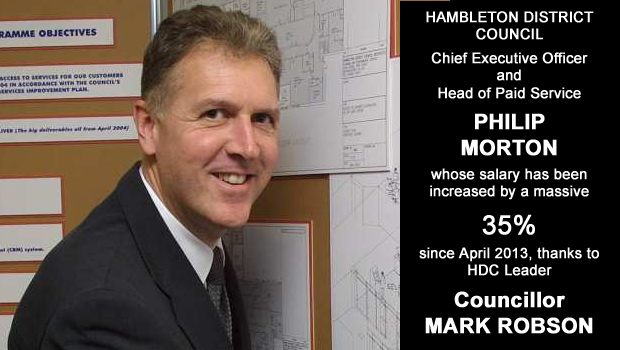