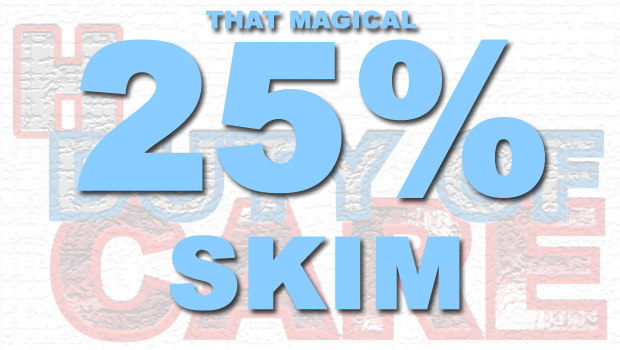 Regular readers will know that I always take an interest in the way Councils seek to maximise revenue, exploiting every imaginable source and, as often as not, invoking considerable latitude when it comes to the question of whether or not their machinations are even legal.

This present tale happens to concern Hambleton District Council – much in the news in recent months because of a number of contentious circumstances, including (but not limited to):

Now consider the circumstances of those Council Tax-payers in Hambleton District who are entitled to what is known as the Single Adult Rebate – a reduction of 25% in the amount of Council Tax payable, contingent upon sole occupancy by ‘qualified persons’, to ease the burden on low-income households. The Council also provides a monthly-payment system, thus exercising its ‘Duty of care’ to residents. 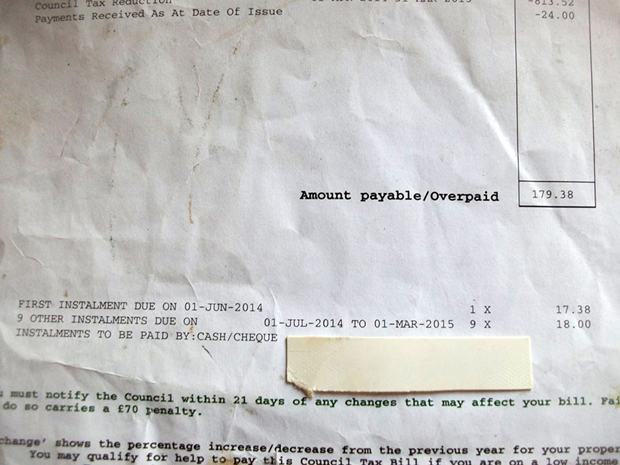 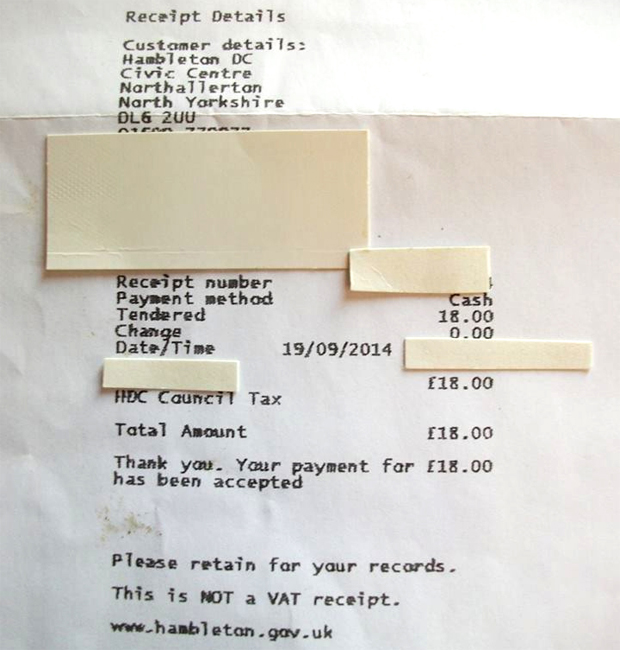 Unsurprisingly, when the 1st October 2014 payment was delayed and not forthcoming on the first of the month, as the payment schedule required, HDC spat out a red-letter COUNCIL TAX REMINDER NOTICE. There was no mention, by the way, of the £70 Penalty for failure to notify any relevant changes, as mentioned in the Payment Schedule.

But a careful inspection of the red-letter COUNCIL TAX REMINDER NOTICE does show that a simple “error” had occurred and, inevitably, it was an “error” that played in favour of the Council.

Instead of a polite reminder pointing out that the MotP now stands in arrears Payment Schedule in respect of the payment of £18.00 due 1st October 2014, the Notice demands payment, within SEVEN DAYS, of £25.61 – the amount that would have been payable had the 25% Single Adult Rebate not been applicable – accompanied by the usual threats and intimidation to the effect that if payment is NOT forthcoming within that time period, then the full outstanding balance of £145.61 would immediately become due and legal action to recover it would ensue – credit card payments to be surcharged at a rate of 1.77%. Plus another £128.00 costs, should the matter go to court.

That struggle to scrape together eighteen quid for the October monthly has suddenly ballooned into a potential £278.45 – scary stuff, considering that the full amount of the Council Tax was only £179.38 in the first place.

The failure to scrape together the October £18.00 payment could put another hundred quid on the overall bill. 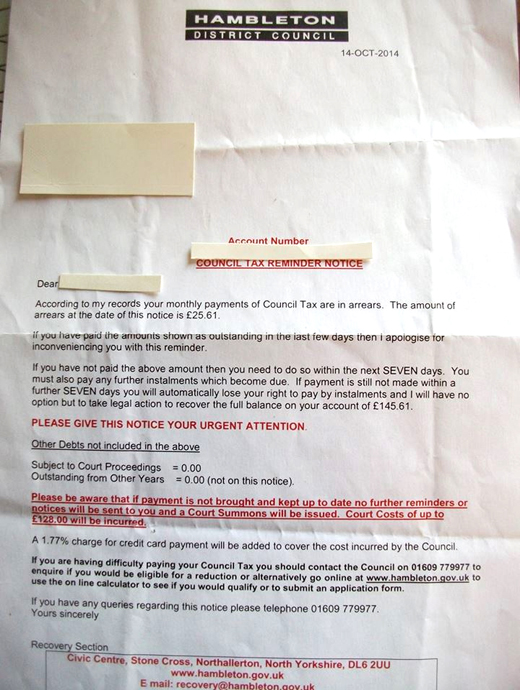 The MotP of course telephoned the HDC Council Tax department to ask why £25.61 was being demanded (and in heavy-handed terms) when the outstanding amount was, in fact, only £18.00 – and NOT the £25.61 which was being demanded. The MotP was concerned that making the agreed payment of £18.00 might not suffice to prevent the threatened legal action.

The MotP was told that:

This, of course, falls some way short of resolving the “computer problem” in an equitable way – never mind evincing even a little lip-service to that Duty of Care.

Significantly, it was readily apparent from the tone and fluency of these responses that the operative was well-versed in the nature of the enquiry and had clearly trotted out the Council’s stance on many previous occasions. One wonders how many . . .

Meanwhile, what if the computer problem is not fixed before the 1st November 2014 instalment of £18.00 becomes due?

From the perspective of the MotP, this is none of this offers an attractive prospect.

It would be naïve to imagine that this surreptitious ‘skimming’ of the 25% Single Adult Rebate (SAR) is small beer, amounting as it does in this particular case to about £60.00 per year. There are many members of the public whose Council Tax demands exceed these example figures by a huge margin. As a conservative estimate, let us guess that the average SAR is somewhere in the order of, say, £200.00 per year.

If there were no more than 125 of them, that would increase HDC’s revenue by £25,000 which, by chance, happens to cover the Chief Executive’s recent salary increase – not that I am suggesting that the Council would rob Peter to pay Phil.

So the point is this:

How many other members of the public have received threatening letters (COUNCIL TAX REMINDER NOTICES ) from HDC that also have failed to take into account the legitimate Single Adult Rebate of 25%?

How many of those have been so intimidated by the threat of “legal action” that they have paid their red-letter COUNCIL TAX REMINDER NOTICES without questioning their legitimacy?

How much of the 25% Single Adult Rebate skimmed off in this way has found its way back into the Council’s coffers as a direct consequence of this alleged computer error?

What steps will the Council take to ensure that those who have been over-charged will be suitably reimbursed?

Or will the Council continue to demand, backed up by “legal action”, the extra 25% from all who have either overlooked the over-charging or are so intimidated by “authority” that they cannot summon the courage to challenge it – for fear of the daunting financial penalties contingent upon doing so?

Perhaps the Council will adopt the highly questionable stance of the City of York Council, who (according to the national press) has accepted £1.8M pounds in ‘fines’ from wrongly-convicted motorists, but has resolved to repay only those who, having become aware of the illegality of the convictions, actually make a formal request for repayment – around only 10% so far?

Despite the fact that the country’s leading traffic law authority Nick FREEMAN has written to North Yorkshire Police Chief Constable Dave JONES, explaining that the CYC’s stance constitutes a criminal offence, the Chief Inspector has stated that no action will be taken by the North Yorkshire Police. Apparently, demanding money with menaces is not a crime at all when committed by local authorities. One wonders quite how this can be commensurate with the NYP’s declared objectives of its Safer Neighbourhoods initiative, if citizend are not safe from the unlawful predations of the Councils.

Having tackled the Chief Constable and Police & Crime Commissioner Julia MULLIGAN on the subject of Councils, Council Officers and elected Councillors being permitted to operate outside of the law with apparent impunity, I know first hand that the system is stacked against the man in the street.

Julia MULLIGAN is on the record stating that complaints to the Professional Standards Directorate of the North Yorkshire Police cannot be relied upon since that institution is NOT FIT FOR PURPOSE. Complaints against the North Yprkshire Police are unlikely to obtain redress, either, because according to Julia MULLIGAN, the Independent Police Complaints Commission is also NOT FIT FOR PURPOSE.

Where does this leave the low-income single adult who has been scammed and threatened out of his/her Single Adult Council Tax Rebate of 25% – that magical 25% ‘Duty of Care’?

Up a certain well-known creek, without a paddle.

So if this happens to you . . . I mean YOU . . . then do not be afraid to challenge Hambleton District Council. And you can copy your emails Cc: to news@nyenquirer.uk

They are always happy to know that we are scrutinising their performance.