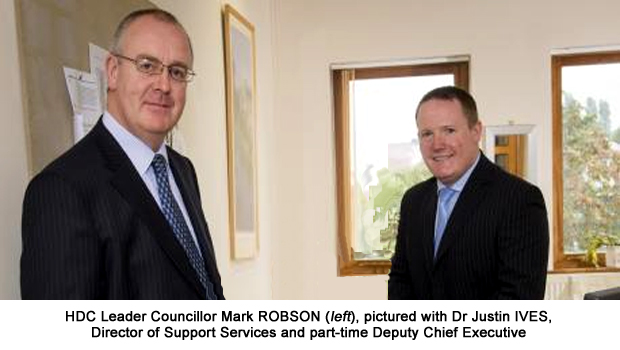 I hope that readers will be agreable to a further foray into the labyrinthine viscera of the Hambleton District Council Pay Policy?

Readers who have already ploughed through those articles can safely skip the next section – thus avoiding another (possibly fatal) fit of righteous indignation.

I have been requesting recently-appointed HDC Monitoring Officer Gary NELSON for a couple of months to monitor Exelby, Leeming & Newton Parish Council (which has been operating well wide of the law for many years, though only since the NYE began scrutiny have three out of the seven Parish Councillors resigned, thus far) and deal with well-documented allegations of some of the criminal aspects of the Localism Act 2011, the Data Protection Act 1998, the Local Government Act 1972 and the Freedom of Information Act 2000.

Monitoring Officer Gary NELSON has repeatedly informed me – or, rather, misinformed me – that this is none of his business. (Never mind that a statutory Officer of a Local Authority is morally and ethically bankrupt. We are talking public sector here, so pretty much anything goes on that score).

In fact, half an hour of Googling was all it took to establish that he was full off that stuff that makes the roses do so well.

But my formal Corporate Complaint against him soon underwent an attempted boot into the long grass by Gary NELSON’s close colleague Michael ‘Mick’ JEWITT, the Director of Environmental and Planning Services – on the absurd premise that, since I am not a resident of Hambleton, Gary NELSON can tell me as many lies as he sees fit – which, by the way, is no small number.

So I doubled up on my formal Corporate Complaint and sent it up to the Chief Executive Officer Philip MORTON, copying in the Leader, Councillor Mark ROBSON, both of whom appear incapable of finding a form of words that would (at the very least) constitute a simple acknowledgement – much less a response.

Leader Councillor Mark ROBSON turned out to be in interesting case in his own right. He and his Chief Exec Phil MORTON negotiated the Chief Exec’s new salary between the two of them – 25% rise, following a 10% rise the year before. Worse still, when tackled on this point by an interested member of the public, Leader Councillor Mark ROBSON actually denied it – in writing. (You probably could make it up). 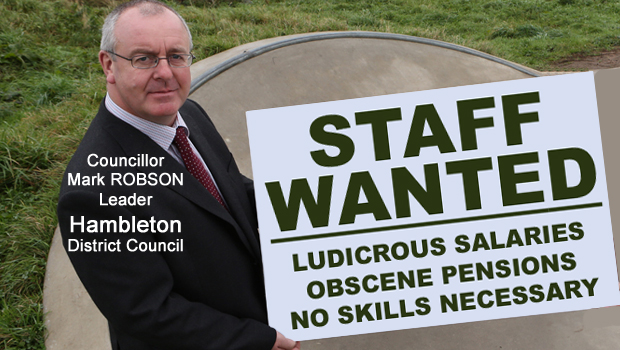 For reasons beyond the wit of man (maybe even woman), the second of these two articles has generated an unprecedented volume of traffic, both to this site and throughout Facebook and Google+, despite being published mid-evening, on a Friday, when social media loses out to real life – down the pub.

I can only imagine that the vision of a tiny group of mediocrities – albeit, bearing polysyllabic job-titles (of their own derivative design) – closeted in an oak-panelled office fit for an archbishop or a Radio 1 DJ, patting each other on the wallet and saying “What ho!”, is enough to induce a profound sense of outrage and disgust that readers feel compelled to share it with others – to lighten the load. Thank you all for doing so.

So I decided to pick my way down from the summit of Hambleton governance to the next rung on Jacob’s ladder – the Deputy Chief Executive Dr. Justin IVES.

It brought to mind a childhood riddle, which I paraphrase here:

As I was checking Dr. Ives,

I met a man with several rôles,

Each rôle had several positions,

Each position had several minions,

Each minion had several lickspittles:

What are we paying for, Dr. Ives?

As serendipity would have it, at that very moment an email popped into my in-tray. Pausing to read it, I quickly realised that it came very close to being the article that I intended to write. So, having solicited and received the consent of the writer, I present it here – exactly as it came to me:

I have just read your article with great interest.

I, too, have been probing Hambleton District Council regarding the mechanisms and evidence to justify awarding such large pay rises in these extreme times of austerity. We are constantly told there is no money and yet the Leader of the Council has awarded a pay rise of 25% to his Chief Executive Officer.

How was this pay rise awarded? What was the format of the negotiations? Where is the evidence to justify this pay-out?

I have also tried to fathom the mystery of how Dr Justin Ives was awarded a £5,000 pay rise. Dr Justin Ives, now grandly titled ‘Director of Support Services and Deputy Chief Executive’. The ‘Deputy Chief Executive’ element of the new job came with a staggering £5,000 pay increase. This was apparently following another one of Hambleton District Council’s inventive ‘management restructures’, where suddenly everyone in the exclusively élite executive club comes out smelling of roses – plus a whopping great pay rise to boot!

I have also looked in the mysterious HDC Pay Policy – I say mysterious, because the document keeps changing (though I’ve yet to discover why HDC keeps changing it) – Dr Ives is on £90,000 after he picked up a £5,000 pay rise for being the new Deputy Chief Executive Officer.

Although Dr Ives’s pay rise isn’t a patch on the Chief Executive’s recent 25% pay increase following the mysterious discovery that the current CEO of HDC, Phillip Morton, possessed new special business acumen powers in ‘economic development’ that weren’t entirely perceived when he originally applied for the job (following the departure of his boss, the previous CEO), in unexplained and strange circumstances. You’d have thought that those District Councillors on the interview panel for the new CEO’s job would have picked up on these astute business skills the first time round (back in 2012, when they hired him – when he was Deputy CEO) and thereby saved us a packet by taking him on for a mere £100,000 with the special business powers in ‘economic development’ thrown in with the deal.

Anyway getting back to our new Deputy Chief Executive.  Doesn’t this provoke a series of questions?Questions that could be directed at those decision-makers, our locally elected representatives, the District Councillors, like:

The trouble is, or so we are continually told, that if we [the taxpayer], don’t continue to foot the bill for these pay awards, we [the hapless taxpayer] run the serious risk of losing these quality managers to the private sector.  What do they keep saying – “We must pay the going rate to ensure we attract the appropriate calibre of excellence into our Councils.”

I, for one, would willingly run the risk of losing these top calibre corporate managers . . . I would also bet that they wouldn’t voluntarily defect to the private sector – simply because they know they are on a good junket at our expense!

Let’s keep their pay at a sensible level with no outrageous pay hikes.  After all real front-line staff do not get pay rises of this magnitude. Therefore nor should these corporate managers.  I am absolutely certain that HDC could function without so many Directors, Chief Executives and Deputy Chief Executive Officers.  Why not let the new 5 x Heads of Service (recently created under the management restructure and another story in itself) run the organisation within a County-wide Unitary Authority? This would save millions and millions of pounds and still maintain our real front-line services

At this early stage in my enquiries, I have little to add (more soon, of course), to Ian WATKINS’ extremely pertinent communication. Naturally enough, I stepped through some of the dustier corners of the HDC web-site to satisfy myself that all was correct. And there I stumbled upon a devious little Gordian knot of cross-linking that even Gollum would admire. 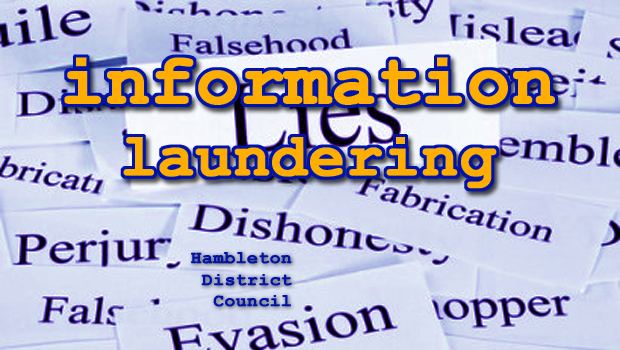 I was hunting around trying to confirm the identity of the present HDC s.151 Officer and I came across the following Agenda: 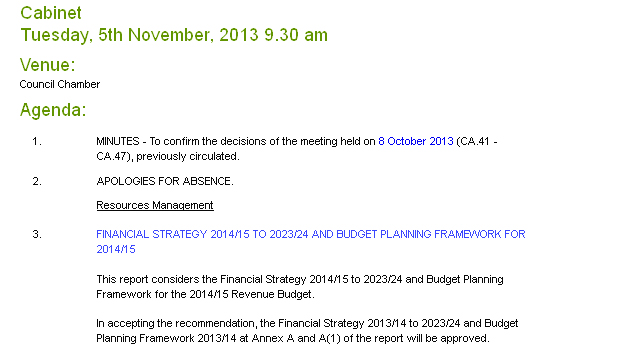 Clicking on the link at Agenda Item 3, I arrived here:

Here we see that it was none other than Dr Justin IVES who recommended the approval of the Financial Strategy Framework 2014/1 and the Budget Planning Framework 2014/15 (see 4.1).

Or rather second-top man.

Scrolling down to the bottom of that first page, though, we find the Minutes of that Meeting:

This tells us that the Cabinet duly recommended the approval of the Financial Strategy Framework 2014/1 and the Budget Planning Framework 2014/15 by Full Council – but neglects to mention that it was Dr Justin IVES who authored the Report that recommended it to Cabinet.

No big deal, perhaps – until we remember the Pay Policy.

This is a technique known in local government circles as “authorship laundering”. It is taught by such dubious organisations as Common Purpose (whose battle-cry is “Leading Beyond Authority”) and it is most definitely not directed toward the common good.

Local authorities may perform only such actions for which there exists statutory authorisation. How can going “beyond authority” (this, in law, is known as “acting ultra vires“, and is addressable by the courts) be acceptable in a democratic society?

I would contend that acting “beyond authority” is another way of demonstrating rock-solid confidence in never being vulnerable to being held to account. This, for example, is what Monitoring Officer Gary NELSON seems to have done in repeatedly denying his statutory responsibility to monitor the Hambleton District Parish Councils.

So why do they do it?

The answer is too complex to be captured in this article. But an insight can be found in the following extract from a book entitled “How Much Is Enough”, published in 2012 and authored by economist and historian Professor Lord Robert SKIDELSKY and his philosopher son, Dr Edward SIDELSKY. The fly-note quotes Epicurus: “Nothing is enough for the man to whom enough is too little”. The passage that I find so pertinent reads as follows:

The stage is set for the coming struggle between the digital elites and the digital proletariat.

We doubt that it will come to this. If it does, the digital elites are bound to win, since they will find ways to privatize knowledge. And even if the digital proletariat win, what have they to put in place of what they destroy?

Council Officers are not “élite” in virtue of any innate intellectual or moral superiority.

No. It is merely a position that we permit them to assume because we allow ourselves to be taken in by their devious machinations – of which “authorship laundering” is merely one tactic within a wider strategy whose objective is the privatization of knowledge – “information laundering”.

The privatization of information about the proletariat is not compatible with a free and democratic society.

So we must not look to our Councils for transparency. We must mine it for ourselves.

At the shallowest level, we find this:

Grand Total £457,828 – almost half a million pounds for five men who, as we have seen, are neither transparent nor accountable. And for those who would have you believe that “accountability” is merely a buzz-word with no application in the real world, let me remind you of Hillsborough, Jimmy SAVILE, Peter JACONELLI, Cyril SMITH, the Mid Staffs Hospital Scandal, the Orgreave Miners’ Strike cover-up and the Rotherham sex-abuse scandal. How much accountability have we witnessed there?

Enough of these cover-ups!

If we are too blasé to care for ourselves, perhaps we should at least think about our future generations.

Should we abandon them to a life serving those who we are paying to serve them? 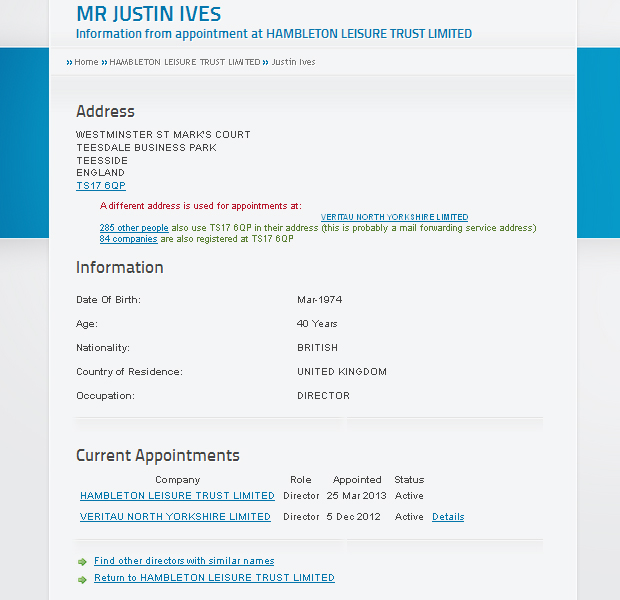