“Whistle-blowing” is a common parlance term that signifies what is ‘officially’ known as “making a Public Interest Disclosure”.

Whistle-blowers are people of good conscience who have come across wrong-doing in their working environment and feel a sense of civic duty to report their findings. 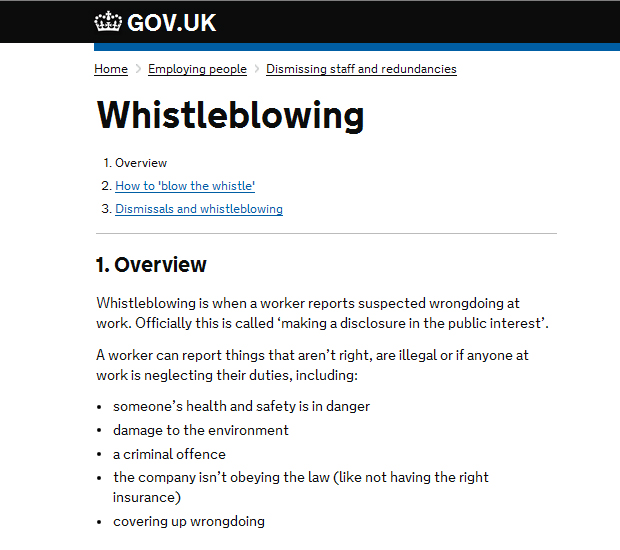 For many, this is a fraught decision – especially on the last bullet-point; “covering up a wrongdoing”.

On the one hand, they feel that they know when something is ethically or criminally wrong and contrary to the best interests of their respective organisations – and the public, whose interest their respective organisations are constituted to serve. They feel this with a certainty that goes beyond any mere subjective sense of injustice, and thus feel morally compelled to “blow the whistle”.

On the other hand, they know that “rocking the boat” carries the risk of victimisation, bullying in the workplace, being passed over in the promotion race, or even outright dismissal.

The Public Interest Disclosure Act 1998 specifically protects whistle-blowers from jeopardising their positions, provided that they comply with the terms of the Act. According to Government sources, all statutory organisations are required, by law, to have a whistle-blowing policy and procedure. There is no reason to believe that Hambleton District Council is exempt from this legislation.

As readers may imagine, we at the Enquirer receive many approaches from people who feel the need to “blow the whistle”. Some of these are anonymous and often are motivated only by personal malice. They are dismissed immediately.

Some, whilst insisting on anonymity, do provide their real names, contact details and positions and even when they evince fear and the expectation of negative repercussions.

These “whistle-blowers” must be taken more seriously. A dialogue begins. It is important to establish whether or not hard evidence to support the allegations exists. Maybe there is no hard evidence, beyond the potential “whistle-blower” personally having witnessed some wrong-doing, first-hand. In some cases, this experience has been shocking – traumatic even.

Our task is to investigate (so far as is possible, without the investigative powers of a statutory body) the veracity of the allegations.

Sometimes, we are invited to act as “go-between” – liaising between the “whistle-blower” and the organisation in which the alleged wrong-doing has taken place.

There is also a national organisation dedicated to acting as “go-between”. It is called Whistle Blowers Press Agency Ltd. Their web-site makes for interesting reading.

Moving, now, from the general to the particular:

On the back of a series of articles highlighting various ethical shortcomings of Hambleton District Council, I have received information from a number of sources, both within the Council and from former HDC personnel.

When the circumstances of any given allegation are corroborated by information from multiple sources, the allegations inevitably take on a higher degree of credibility.

I have in mind a particular series of allegations that reached me through two independent sources, both very credible, so I emailed Monitoring Officer Gary NELSON on 18th September 2014, asking for guidance on how the Council would wish me to proceed in a “whistle-blower” case.

Monitoring Officer Gary NELSON did not respond to my email, so, in an email to Director of Environmental & Planning Services Micky JEWITT on 24th September 2014, I asked him to remind Gary NELSON that I was awaiting his response.

This he did, and on 25th September 2014 – a week later – I duly received the following one-liner from Gary NELSON:

This, in itself, is astonishing. The Officer against whom I have a still-to-be-resolved formal Corporate Complaint (on grounds of incompetence and/or disingenuousness) is now suggesting that I should “forward” to him (i.e. in writing) allegations against HDC personnel – rather than submit them through a formal process to an impartial and untainted Officer. He has not even directed me to any documentation on the HDC web-site.

Aside from the absence of any apology for having ignored my email of 18th September 2014, Gary NELSON has omitted to provide me with details of the HDC “Whistle-blowing Procedure” – a statutory requirement, remember, in all statutory organisations.

I decided to search for it myself. I performed an ESS (Exhaustive Site Search) on the Hambleton District Council web-site, looking for strings like “Whistle”, “Whistle-blower”, “Whistleblower”, etc, etc – and found only this one single reference, in the Council’s “Publication Scheme and Information Asset List” document:

This “Publication Scheme and Information Asset List” document informs us that the vast majority of the Council’s documentation is not actually published openly at all – and is, in fact (as with the “Whistleblower’s charter” document) – available only as a response to a Freedom of Information request, with all the concomitant procedures and cost implications.

Before I can make an approach via the “Whistle-blower’s Charter” – which, above all else, must guarantee confidentiality and the highest possible standard of Data Protection for the informant(s), I should first submit an FOIA request, thereby signalling to the entire FOIA department that a “Whistle-blower” is considering lodging allegations – thus exposing my own name, contact details, Personal Data and the confidential details of the allegations to the vagaries of the HDC office grape-vine.

In point of fact, this information should be readily available, to HDC personnel and the public at large, as a one-click download.

Unfortunately, Hambleton District Council is by no means an authority that has taken heed of Eric PICKLES entreaty:

“If councillors and council officers are to be held to account, the press and public need access to the information that will enable them to do it. If town halls want to reduce the amount they spend on responding to freedom of information requests they should consider making the information freely available in the first place. The simple act of throwing open the books, rather than waiting for them to be prised apart by the force of an FOI, might even save a few pounds in the process.” – [Eric Pickles – January, 2011]

But back to the “whistle-blower”.

It would be manifestly unfair to expose the identity of this present “whistle-blower” to discovery by the Council. The allegations are so serious that, in this case more than most, the “whistle-blower” has every reason to believe that there would be a serious back-lash risk to both career and well-being.

The allegations themselves are so specific that even a general description would serve to severely limit the number of people who could have been aware of a specific incident and the actions of the parties involved, thus pointing ever closer to the identity of the “whistle-blower” – who has a statutory right to remain anonymous.

Suffice it to say that the allegations go beyond a single act of unprofessionalism and breach of trust, and extend to the concomitant corruption of a group of HDC personnel who are alleged to have colluded for the purpose of preventing knowledge of the original alleged act, along with the identities of the two main alleged protagonists, ‘leaking’ into the public domain – an eventuality that would have left the Council’s public reputation in tatters.

So what is the next move?

Should the “whistle-blower” beat a tactical retreat and try to find peace of mind whilst living with the knowledge that good intentions have been defeated by fear of retribution?

Or should the North Yorks Enquirer publish the entirety of the allegations – and risk a law suit (which it could lose only in the unlikely eventuality that the allegations are untrue)?

Or should I ask the Hambleton District Council ‘Top Five’ Senior Officers – who, from their purview on the bridge of the good ship Hambleton MUST be aware, and have been aware, of the events that the “whistle-blower” has described – should I ask the ‘Top Five’ to each provide a personal statement asserting total ignorance of the event, or an honest, transparent and exhaustive account of what actually took place?

I favour the latter.

So I have emailed the ‘Top Five’ (on Monday 29th September 2014), requesting from each a frank, open and transparent statement for publication.

So how’s about it, Phil? Justin? Dave? Mick? Martyn?

Has any one of you the integrity to stand up and say:

I have asked them to respond to me not later than 5:00pm on Wednesday 1st October 2014.

At the time of publication of this article, I have not received any response. In fairness, I should add that I have received ‘read-receipts’ from two – Dr Justin IVES and Mr Michael JEWITT.

They, at least, cannot complain that they have missed my deadline on grounds of never having been aware of it.