Following the extraordinary turn of events at Exelby, Leeming & Newton Parish Council in recent months, readers may be less than surprised to learn that the Principle Authority with statutory duties for monitoring and regulating Parish Councils in that part of the country – Hambleton District Council (HDC) – has now shown itself to be almost equally inept – or duplicitous.

Naturally, I have agreed to comply with a request by the North Yorkshire Police to place a moratorium on any further publication of reports on the Exelby, Leeming & Newton Parish Council affair until such time as on-going investigations have been completed.

However, I see no obstacle to reporting on the machinations of HDC.

One might reasonably have expected of HDC Monitoring Officer Gary NELSON that he “does what it says on the tin” – monitor the conduct of elected members within the Hambleton local government area. But Gary NELSON responded to no less than four requests to him to  address the ELN situation by informing me, in one form of words or another, that he holds no remit or responsibility to concern himself with any of the Parish Councils in Hambleton District, save when requested by a any given Parish Council to do so.

On 1st September, Gary NELSON wrote to me:

Now I am not the man to pre-judge the integrity of HDC Monitoring Officer Gary NELSON. Clearly, he must be a man of impressive credentials. Certainly, the people of Hambleton District would hardly be called upon to part with £70,000 per annum, for a buffoon.

But that need not prevent a tireless investigator from pursuing his own research.

This is what your tireless investigator has discovered.

But that, when all is said and done, is only the NALC Legal Guidance. It is not law.

To be absolutely certain that Gary NELSON has handed me a pack of lies, we need to go back to the statutory source – s.28 of the Localism Act 2011:

And for the avoidance of any remaining doubt, Councillor Heather COUGHLAN, the Mayor of Whitby, confirmed for me on 5th September 2014:

Finally, I visited the HDC web-site and performed a search for “Monitoring Officer”. I expected to see a number of entries that might shed light on Gary NELSON’s duties. But I was surprised to find a number of returns in which phrases such as “Complaint against a Parish Councillor” and “Complaint against a Parish Council member” occurred – but clicking on them brought up only a “#404 – article not found” message.

Clearly, references to the Monitoring Officer dealing with Formal Complaints against Parish Councillors have been removed from the HDC web-site.

But not this one, dated 11th November 2013 – long after the inception of the Localism Act – in which Item 4 on the Agenda states: As readers will (I hope) have noticed, I make clear in my articles and in my correspondence that I write IN THE PUBLIC INTEREST.

It is clearly a matter of conspicuous public interest when the man who takes £70K per annum out of the public purse not only demonstrably fails to execute the duties which he is employed to perform, but, beyond that, hands out a pack of lies in defence of Parish Councillors who have been shown – again IN THE PUBLIC INTEREST – to treat their statutory duties and obligations with utter contempt.

I write to acknowledge receipt of your complaint. Under the Council’s complaints procedure this will be passed to another officer who will no doubt be in touch in due course.

In due course, I was indeed contacted by “another officer” – one Michael ‘Mick’ JEWITT, the Director of Environmental and Planning Services at HDC,who had this to say:

“I should first point out that the Council does not deal with complaints from those who are not residents of the District unless they have been directly affected by a Council service or a failure to provide a service. I am aware that you are not a resident of the District. I do not think that you are directly affected by whether the District Council will entertain allegations against Members of Exelby, Leeming and Newton Parish Council or complaints about that Parish Council or its Clerk. Consequently, I will not entertain a complaint from you direct.”

Mr Michael ‘Mick’ JEWITT – also a man who takes circa £70,000 per annum out of the public purse – has the effrontery to tell me that, since I am not a resident of the district of Hambleton, Monitoring Officer Gary NELSON may lie to me repeatedly with absolute impunity.

They imagine that they are not to be held to account by their paymasters, mere members of the public.

They imagine that they are, in some archane sense, “above” us – “above” the law, even.

Yet they are paid by us to serve us.

But let us remain open-minded.

Having emailed ‘Mick’ JEWITT to make my views known to him, he responded, within minutes, to assure me that he would respond by “close of play tomorrow” – meaning 5:00pm on Wednesday 10th September 2014.

The brunt of his position is contained in the following statements – statements of such absurdity that only a Council ‘numpty’ could have written them:

Rubbish. No, they do not. The matter to which I refer is a formal Corporate Complaint against HDC Monitoring Officer Gary NELSON for handing me a pack of lies.

Rubbish. This Council has a statutory responsibility to deal with the transgressions of the Parish Councillors, as cited above.

So, like it or lump it, ‘Tricky Micky’ JEWITT is going to earn his superannuated salary, whether he likes it or not.

And, meanwhile, if he wants to turn his CV into a laughing-stock, he can be my guest. The music has stopped; who will be next without a seat? 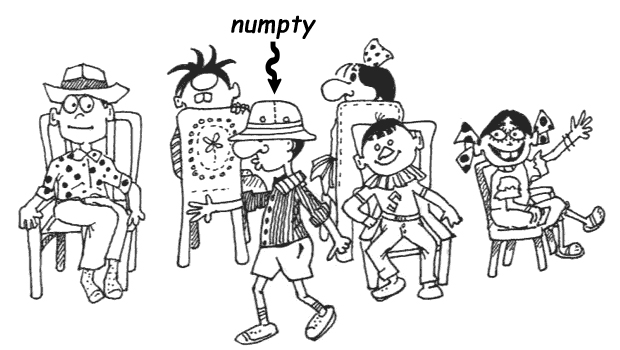