A Letter to the Editor fromTIM HICKS FCA, commenting on the extraordinary conduct of Exelby, Leeming & Newton Parish Council, as reported here in the Enquirer. Unfortunately, the Enquirer is unable to answer the questions raised, or to comply with the writer’s request, since the Council has suspended all correspondence with the public until further notice. Hopefully, Exelby, Leeming & Newton Parish Councillors may read this Letter and thus be able to view the requested CodHead cartoon, reproduced for their edification at the foot of this Letter.

Exelby, Leeming & Newton Parish Council falls within the jurisdiction of Hambleton District Council, whose Monitoring Officer Gary NELSON has repeatedly refused to intervene, despite being confronted with prima facie evidence of criminal actions within the meaning of the Localism Act 2011. It is our information, however, that a member of the public has since reported these actions to the North Yorkshire Police, where an investigation is now in progress.

I watched with incredulity the conduct of Exelby, Leeming & Newton Parish Council when faced with filming at a public meeting.

I cannot understand why the Council as a body felt so threatened by filming in a public place of a public meeting, that they closed the meeting.  Many Councils film their meetings and allow access to the film on the Council website. Why on earth should the Council take such an extraordinary and extreme step? Particularly as it had invited Nigel Ward to attend to address the issues he had raised.

Presumably, if someone with a camera turns up at every meeting, the Parish Council will stop holding meetings and stop functioning.

Then I read of the allegations concerning Councillor Dixon, whom I presume was the blonde lady Councillor that featured prominently in the video. Although I pass no comment on them, it seems outrageous to me that a public body would invite a member of the public to a meeting to respond to allegations of illegality and then close the meeting without addressing them – leaving allegations of criminality completely un-responded to. The Parish Council is a public body and has a duty to respond to allegations of illegality or, alternatively, if it cannot, to compel the officials concerned to resign.

Please could you confirm if you have had any response from Councillor Dixon or the Parish Council concerning the allegations Nigel Ward makes in the article.

Please can you also send the Councillors a copy of the CodHead Cartoon below. 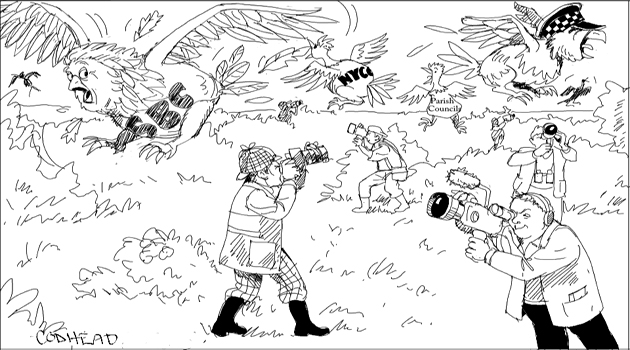