Every once in a while – usually during the tedious delays (sometimes months outside of the statutory 20 days) in the provision of FOIA responses – we turn our attention to the performance of Town and Parish Councils within the Borough of Scarborough (see here and here) and, more recently, further afield in the County of North Yorkshire.

Famously, both Private Eye and BBC ‘Inside Out’ vindicated our concerns. 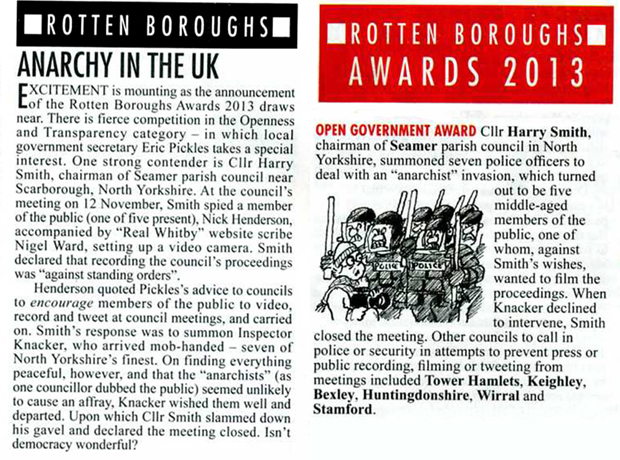 I am horrified to report that, in the 48 hours since the publication of Michelle DOLAN’s Rogue Town & Parish Councils SURVEY Appeal, scores of electors have lodged responses reporting appalling lapses in the legally required standards of local government at the grass-roots level.

We will be following up on several of the more flagrant examples in due course, but first it is important to up-date readers on the machinations of Exelby, Leeming & Newton Parish Council – the so-called Parish Council from Hell.

In her response, Parish Clerk Margaret STEAD disclosed that the Councillors stood in serious breach of a wide range of legal requirements, including certain Register of Interests infractions that have been designated as criminal acts under the terms of the Localism Act 2011. (Click on the above link for details).

A week later, on 4th July 2014, the Enquirer published a Letter to the Editor from a married couple, electors of the Parish of Exelby, Leeming & Newton, itemising an even longer inventory of inexcusable transgressions, amounting to an absolute contempt for the legal requirements.

A fortnight later, on 11th July 2014, ELN Clerk Margaret STEAD emailed me, inviting me to the next meeting.

Naturally, I accepted the Councillors’ invitation and attended the meeting – an adventure that I covered in some detail in my July 23rd article “Carry On, Cowboy Council”. Readers who find that title unkind are invited to click on the link and read what happened – or watch the video (12min 39secs).

I expect readers to be amazed and shocked by the behaviour, individually and collectively, of the assembled ELN Councillors; aside from the despicable disingenuousness of inviting me to attend to discuss their innumerable shortcomings and illegal actions, they then had the nerve to set up a ‘Rent-a-Mob’ hostile reception. When I showed this video to a County Councillor friend, the reaction was instantaneous – “They have to be hiding something!”.

Indeed, they are hiding something; perhaps many things. This article lifts the lid.

This was a Planning Application for Consent to build and operate an anaerobic digestion waste-treatment plant on land in the ownership of Councillor Dorothy DIXON.

The list of Consultations includes three representations from ELN.

1) On 9th September 2013, by email, objecting and recommending Refusal.

2) On 18th October 2013, by which time ELN had reversed its position and withdrew its objection, thus recommending Consent.

What happened between these two Council resolutions to persuade ELN to resolve on a diametrically opposed recommendation?

We may never know, because the Minutes of the Meetings at which ELN resolved its positions make no mention of the matter being addressed. Minutes of the Council do, however, frequently allude to decisions made “out of meeting” – an illegal practice.

3) On 30th January 2014, ELN responded to a re-consultation request from Planning, confirming only that the Council had no further comment to make.

On 1st April 2014, Planning Consent was granted under an NYCC Decision Notice that imposed no less than eighteen Conditions.

Councillor Dorothy DIXON has declared a Disclosable Pecuniary Interest (DPI) in land at Clapham Lodge, Londonderry (Leeming), on 3rd June 2014 (i.e. after I drew ELN’s attention to innumerable very serious irregularities) – but NOT within the 28 days permitted by the Localism Act 2011 when it came into force on 1st July 2012. Councillor Dorothy DIXON has been breaking the law with impunity since 29th July 2012 – i.e. for almost two years. 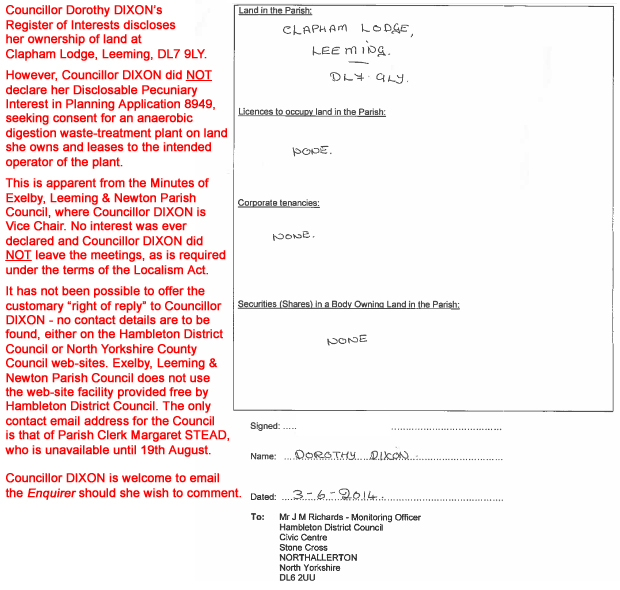 An examination of the Minutes of Meetings of ELN when the Recommendations were resolved shows that Councillor Dorothy DIXON was present and did NOT declare a Disclosable Pecuniary Interest in the Clapham Lodge Planning Application, or (as is required by law) LEAVE any of the Meetings at which it was discussed. Council Minutes are deemed to be facts when presented as evidence in a Court of law.

We may ask again; what happened between the two Council resolutions to persuade ELN to resolve on a diametrically opposed recommendation?

What happened between ELN’s email to me inviting me to attend (“Parish Councillors would like to invite you to attend the meeting to discuss a way forward.”

Small wonder that Councillor Dorothy DIXON displayed such hostility to scrutiny when we filmed the ELN Extraordinary Meeting of 21st July 2014.

Small wonder, too, that Parish Councillors are widely perceived to engage in public service to grease the wheels of the own private desires and ambitions.

In my view, an elected member participating in a Planning Application process in which he/she holds an undeclared Disclosable Pecuniary Interest is a CORRUPT act.

Under the terms of the Localism Act 2011, it is also a criminal act – as is made unequivocally clear in the DCLG Guidance for Councillors.

I wonder if the ELN ‘Rent-a-Mob’ had this properly explained to them when they were tricked into complicity in ELN’s attempt to intimidate us and thus divert our legitimate scrutiny? I very much doubt it.

On 29th July 2014, I wrote to the NYCC Planning Officer who dealt with Application 8949, a Mr Alan GOFORTH, apprising him of the foregoing. I also copied in Mr Barry KHAN, the new Monitoring Officer who has replaced Ms Carole DUNN (who is widely-believed to be to have left NYCC under a cloud).

I anticipated a fairly prompt response – after all, there is nothing trivial about an elected member committing a criminal act. Mr Alan GOFORTH did not respond.

So on 6th August 2014 (one week later) I emailed Alan GOFORTH with a gentle reminder, again copying in Barry KHAN. Still no response. Sadly, this is the standard reaction from our local authorities when presented with compelling prima facie evidence of criminality on the part of public servants – paid or elected.

In my view, this reluctance on the part of Council Legal Officers to comply with their statutory duty to enforce compliance with statute amounts to nothing less than complicity in the criminal acts that they allow to continue with impunity.

Meanwhile, a huge raft of Formal Complaints and outstanding Freedom of Information requests to ELN, from a number of different electors, is being ignored. Parish Clerk Margaret STEAD is (allegedly) off on medical grounds until 19th August 2014; emails to ELN are disregarded, occasionally eliciting only auto-responses with varying texts – none of which provide alternative contact details, other than the name of the Chair – Councillor John KETTLEWELL. No phone number. No email address. No postal address. Totally off-grid.

Yet no Minutes have been published for the last for four Council Meetings. In normal circumstances, a Council ratifies Minutes at the following Meeting and, of course, publishes them. But not at Exelby, Leeming & Newton Parish Council.

Chairman Councillor John KETTLEWELL has been witnessed pontificating in his local pub. He continues to maintain that filming his Council’s Meeting was illegal. Not true. Perhaps mindful of the furore just up the road at Long Preston Parish Council (where the Chair enjoyed a £20K p.a. contract for grass-cutting), Councillor KETTLEWELL will not be drawn on the circumstances surrounding the ELN Councillor who holds their grass-cutting contract (Councillor Louis ROBINSON) – or on the ELN Councillor who presently is under review by the Solicitors’ Regulation Authority, with whom he holds no registration, for holding forth to be a “qualified person” in legal matters, apparently as a tactic to intimidate electors (Councillor Ray WRIGGLESWORTH).

Apropos Councillor John KETTLEWELL, it would be remiss of me to wind up this article without mention of the fact that he is the subject of a Formal Complaint himself. It so happens that the Minutes of the ELN Meeting of Monday 2nd December 2013 include the following:

It is, of course, illegal for a Council to resolve issues “out of meeting”. Readers will no doubt have already deduced the name of the owner of the “adjacent property”. 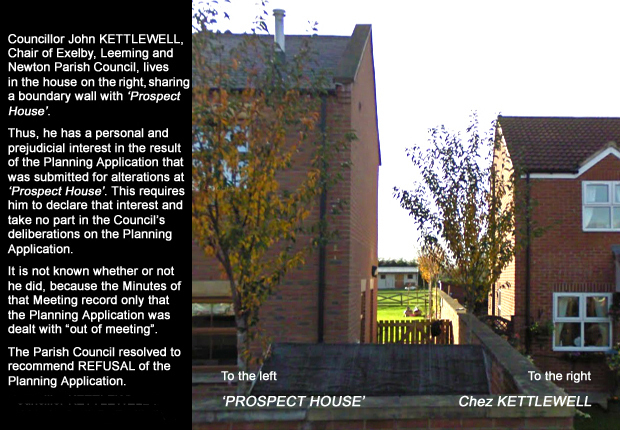 The “powers” of Parish Councils are few indeed but, such as they are, they are “entrusted powers” and Parish Councillors are not entrusted – by the electorate, in our democracy – with those meagre “powers” so that they may be “abused” for “private gain”.

When we vote for a candidate, we endow him/her with our trust; we trust him/her to represent our interests – not his/hers – in the decision-making processes.

Each time a Councillor uses his/her position within the decision-making process to serve not our interests but his/her own interests is a breach of the public trust.

And it is generally about the money – often just paltry sums of money. These self-serving betrayers truly believe that they deserve all the perks.

In my view – and within the meaning of the Transparency International definition – what we have discovered in Exelby, Leeming & Newton Parish Council is a clear case, make no mistake, CORRUPTION – be it ever so petty.

It may be impossible to eradicate corruption in local government. In my view, it may at least be possible, through deep scrutiny and eternal vigilance, to deter corrupt potential candidates from standing for election.

Scarborough Borough Council Solicitor David KITSON tells me that his Council is aware of individuals who have made it known that they have decided against standing for election as a direct result of the voluntary work undertaken by the North Yorks Enquirer –  in the public interest.

It is gratifying to know that our work is not in vain. 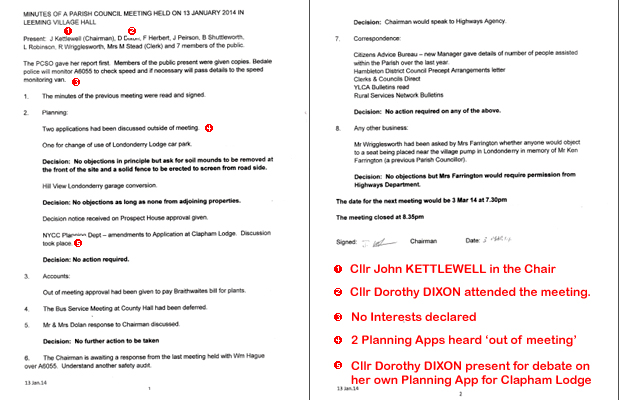 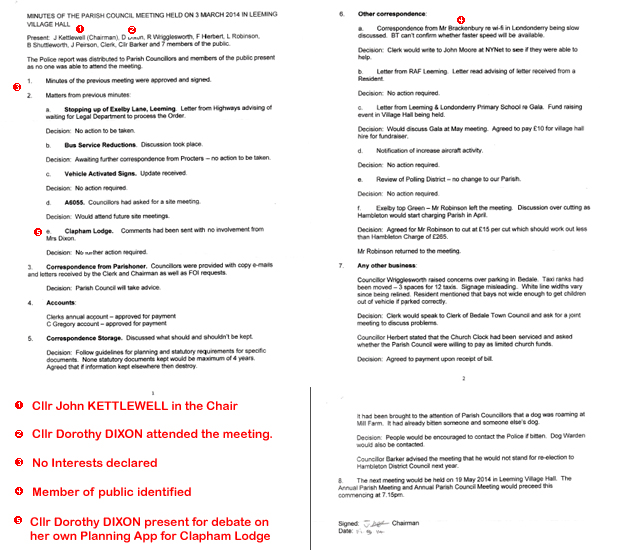