Readers may already be familiar with the details of my investigation into the conduct of Exelby, Leeming & Newton Parish Council (ELN). For those who are not, the entirety of the smutty little saga can be viewed here:

My investigation of the conduct of Exelby, Leeming & Newton Parish Council (ELN) began with a request for certain information under the terms of the Freedom of Information Act, dated 24th May 2014.

On 17th June 2014, Parish Clerk Margaret STEAD provided a response in which the following failures on the part of the Council were acknowledged:

These ‘seven deadly sins’ are openly admitted to by the Parish Clerk. They are not mere allegations; they are acknowledged facts.

The Council’s conduct since these very serious departures from the statutory requirements came to light is no better. A host of further infractions have been committed – and exposed – and yet no action has been taken against the Council, the Chair, the Councillors or the Clerk.

The Council has also ignored issues related to breaches of the Data Protection Act 1998 and has neither acknowledged nor responded to statutory requirements in relation to Subject Access Requests.

Unsurprisingly, three of the seven Councillors – Ray WRIGGLESWORTH, John PEIRSON and Brian SHUTTLEWORTH – have resigned (since which time, the ELN ‘Rent-a-Mob’ has been conspicuous by its absence). The Council has been in ‘lock-down mode’, ignoring correspondence. 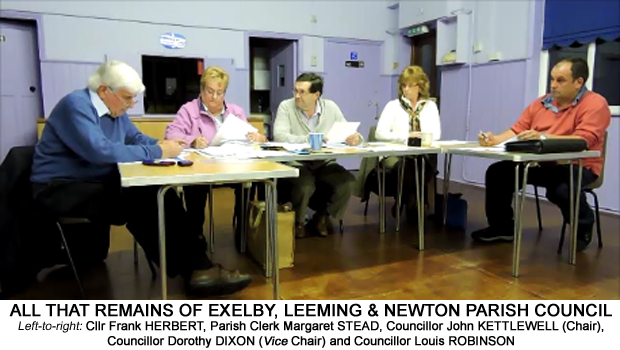 Of the remaining four, Councillor Louis ROBINSON is under investigation in regard to 15 years of grass-cutting contracts granted outside of required tendering procedures.

Councillor Dorothy DIXON is under investigation for failing to declare an interest in a Planning Application for her own premises and, instead of leaving the Meeting as required, actually taking part in the debate and Resolution to recommend Consent. She is also under investigation under the terms of the Councillors’ Code of Conduct in respect of breaches of the Data Protection Act 1998, as well as using foul language towards members of the public in an open Meeting.

Councillor Frank HERBERT has had little to say. One wonders why he stays in the firing-line.

But the Chair of ELN, Councillor John KETTLEWELL, would appear to have a huge problem on his hands, since it is he (along with the Council’s Responsible Financial Officer – Parish Clerk Margaret STEAD) who bears the responsibility for having signed off the Council’s Annual Accounts. Oh, dear.

Quite aside from the financial information contained within the Council’s Annual Accounts, there is a legal requirement to complete a declaration regarding the veracity of various statements confirming that the Council has conduct its business in compliance with statute.

Nevertheless, for the sake of completeness, it is worth reporting the positions of both the External Auditor, PPF Littlejohn LLP and the Internal Auditor (Nigel EXELBY of XLB Accountancy Services) – correspondence with whom clearly indicates that the responsibility for any false declaration rests not with them – oh, no – rather with ELN Chair Councillor John KETTLEWELL and Responsible Financial Officer & Parish Clerk Margaret STEAD.

So the External Auditor has signed off, on 21st August 2014, its acceptance, on trust, of the false declarations made by Councillor John KETTLEWELL and Parish Clerk Margaret STEAD: 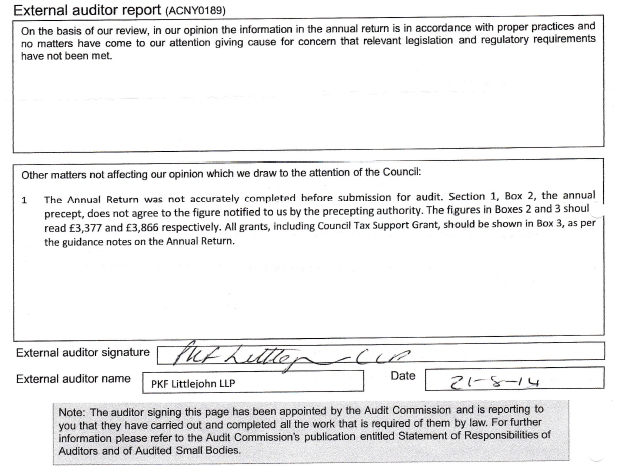 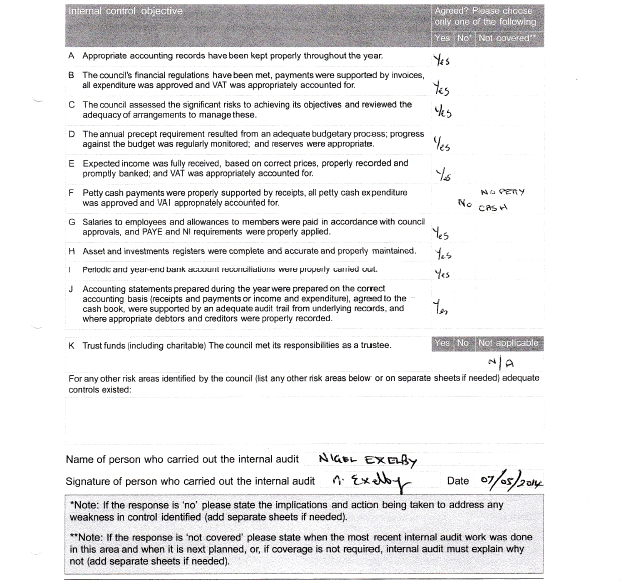 The Internal Auditor is entitled to demand proof of compliance. Failure to comply incurs a Level 3 fine (£1,000) plus £20 per day for continued non-compliance (in the present case, this may amount to up to six years – £43,820).

To me, these responses make it abundantly clear that both the Internal and External Auditors have relied upon the veracity of the accounts as presented to them – taking them ‘on trust’ – and the responsibility for the false declarations must indeed rest entirely upon Councillor John KETTLEWELL and Parish Clerk Margaret STEAD.

But before I itemise the false declarations in question, readers may wish to consider the likely consequences for any member of the public caught having made a false declaration in respect of, say, Income Tax returns, Benefit claims or VAT returns. The Crown Prosecution Service addresses such matters with the following sentencing ranges:

Now let us examine exactly what it is that Councillor John KETTLEWELL an Clerk Margaret STEAD have signed off as true – knowing full well that their declarations are false. 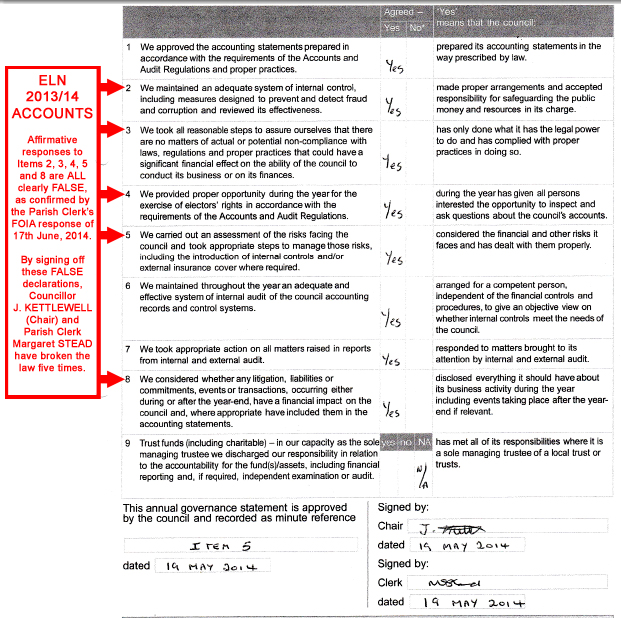 Whether these failings stem from acute incompetence or dumb ignorance is beside the point; the fact remains that five of these statutory declarations are untrue – they are false declarations.

Further, the declarations are accompanied by the information that these accounts were approved by full Council (at Minute Reference Item 5, on 19th May 2014) and yet it was not until 9th September 2014 that Councillor John KETTLEWELL declared the accounts completed. 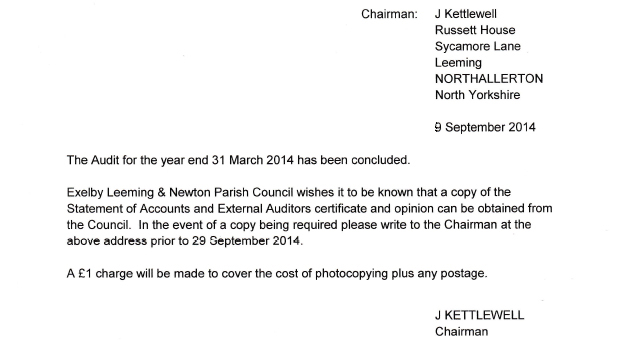 Charles ARNOLD-BAKER makes clear in his seminal work “Local Council Administration” that signing a false declaration on the parish Council Accounts is an offence under s.5 of the Perjury Act 1911, and:

Meanwhile, the Council is ignoring Freedom of Information requests for sight of the Annual Accounts for the past six years, though such documents form part of the public record and should be available in the public domain at no cost.

In fact, according to HDC, the email contact address for Parish Clerk Margaret STEAD is “currently unavailable”.

Has the Parish Council defaulted on its ISP charges? Is the Clerk alive? Is she dead? Has she fled the country? Is she already locked up?

Even the Information Commissioners’ Office has been unable to elicit any response from ELN – or so we are led to believe.

Why would that be?