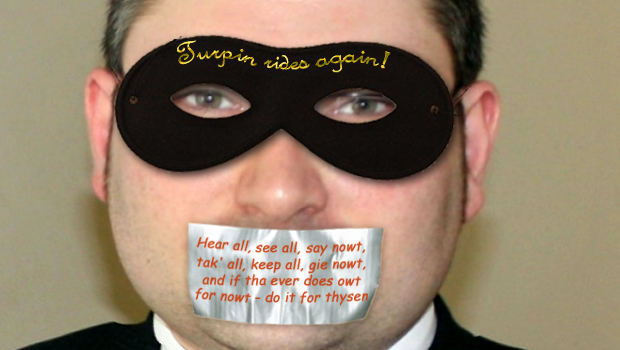 In response to an article published her on the Enquirer on 3rd September 2014 (entitled “A Poke In The ‘Eye’ For York City Council”), one of our readers immediately submitted a Letter to the Editor, published that same day under the heading “CYC: Conspiracy To Defraud”.

The writer, Richard PEARSON of Scarborough, raised a very interesting point; if ‘fines’ collected by the Council in respect of the contravention of regulations that were themselves without legal foundation, surely – once that fact had been established – the Council should be obliged to return the money to motorists who had been summarily convicted of a what turned out to be a “non-offence”. Surely, to withhold repayment from all but those motorists who specifically request repayment would permit the Council to make a gain from an illegal action, and, conversely, inflict a loss on the innocent motorists?

It seemed to me to be a question worth the asking.

So I emailed to Councillor James ALEXANDER, who is the Leader of City of York Council, copying in North Yorkshire’s “Voice of the People” Police & Crime Commissioner Mrs Julia MULLIGAN) offering the Leader a layman’s interpretation of the terms of the Fraud Act 2006.

I will not trouble the reader with the entirety of that email, but the salient points are as follows:

1) The Council deployed a Traffic Regulation Order such that would expose those who committed infractions thereof to being deemed liable to summary conviction under the terms of a PCN, or FPN, if you prefer.

2) Some 53,000 motorists fell foul of the regulations and were duly relieved of varying sums of money.

3) Following a rigorous legal procedure, the ruling was handed down that the Council’s regulations were untenable.

4) The Council initially committed to repayment of the ‘fines’, but ultimately this decision was reversed by a Scrutiny Committee.

I am sure this is an oversimplification of a much more complex chain of events. Nevertheless, it is easy to see how the layman might conclude that the Council has demanded monies based on an untenable application of process. It follows that the motorists who, having parted with their hard-earned money under considerable duress, are now left out-of-pocket – though innocent of any wrong-doing.

Clearly, a tort has taken place. Thus far, we find nothing unusual.

But the next step is to provide the (wrongly) summarily convicted motorists with their remedy.

The onus cannot fall upon the innocent to recover their money; the duty surely lies with the Council to repay it. But these last remarks address themselves to ethical considerations and I want us now to consider the legal implications.

A) the City of York Council is a body corporate – a person:

B) the City of York Council has irrefutably made a representation to the motorists; namely, that it intends, by making this representation, to cause it so to be that infringement of the imposed regulations will be subject to a summary conviction leading to the payment of a ‘fine’ – which will thus cause the motorist loss (or expose him to the risk of loss) – to the Council’s gain:

(1) A person is in breach of this section if he—

(b) intends, by making the representation—

C) the City of York Council is a body corporate whose intentions are directed with the consent of elected members and carried out by officers of the body corporate, being paid public servants.

12 Liability of company officers for offences by company

(1) Subsection (2) applies if an offence under this Act is committed by a body corporate.

(a) a director, manager, secretary or other similar officer of the body corporate, or

(3)    If the affairs of a body corporate are managed by its members, subsection (2) applies in relation to the acts and defaults of a member in connection with his functions of management as if he were a director of the body corporate.

The text that I have highlighted in bold type suggests that Richard PEARSON had made a very astute observation. But I wanted Councillor James ALEXANDER to give his consideration to the matter in a humanistic context, rather than a legalistic one. So I offered him an analogy that places the situation in an everyday setting:

Little Alfie (aged 11) approaches his little sister Beth (6), who is playing a tune of her own choosing on the family piano. Alfie tells Beth that if she does not play a tune of his choosing, he will take away a sizeable number of her possessions as a penalty or forfeit for her non-compliance. But Beth has not grasped Alfie’s intent – because of the sound of the piano and because she is unclear of the precise meanings of words like “sizeable number” or “possessions” or “forfeit” or “non-compliance”. She continues to play her own chosen piece.

Alfie, perhaps realising that there is a dangerous precedent to be set here if he fails to carry out his declared intent, makes off with quite a good few of her possessions. Beth is very upset. Six-year-olds can be very vocal in their protestations.

But then Daddy comes home from work and, sensing an injustice in the air, sets to – to establish the true course of events. He soon realises that Beth is the victim of an action taken by Alfie that is devoid of any legitimacy. He has been a bad lad. Daddy tells Alfie to return Beth’s possessions. But Alfie is tricky. He maintains that Beth can have back only those possessions that she can assert are missing. (Here, the analogy is less pure – I did not want to introduce 53,000 younger sisters to Alfie).

This is manifestly unfair. Alfie, the bully big brother, stands to come out of the exchange ahead of his starting position, despite being the bad guy.

And poor Beth is off to visit her friend Cassandra in Jersey for the summer holidays and has no hope of recalling a full inventory of her assets and claiming on Alfie for every last item. Beth, the innocent little sister, stands to come out of the exchange the loser – despite her innocence.

I concluded my email to Councillor James ALEXANDER by pointing out that, in a very real sense, as Leader of the Council he is very much the “Daddy” of York electors and has a duty to put principle before profit and thereby portray his Council as an honourable institution. And I requested a comment for publication.

Councillor James ALEXANDER has not responded to me personally, but the Council’s Communications Manager Debbie MANSON was very prompt in providing the following statement, for which I am most grateful:

“The standard democratic process was followed in this decision making process and was held in a fair, open and transparent way. The decision to require an application to the council, to enable repayment of fines, is legally sound and has been agreed by a leading QC.

“At around the same time, the Traffic Penalty Tribunal (TPT) made a decision regarding some appeals by individuals against fines imposed on both Coppergate and Lendal, which questioned the legality of the schemes. The council applied for a review of that decision, considering the decision to be legally flawed. After a further three months the TPT had still not reached a decision.

“Considering this significant passage of time and the uncertainty that this imposed on individuals, a report was taken to a public Cabinet meeting 5 August and it was agreed that the council would progress with the refund process for Lendal Bridge. Subsequently, officers were asked to put in place a process for the Lendal Bridge fines to be refunded on application to the council. It was also agreed that the council would no longer pursue a review of the TPT decision about the Lendal Bridge fines, but that the review would continue into the Coppergate decisions.

“The Cabinet decision was subsequently ‘called-in’ at a scrutiny meeting, which was held on 27 August, but was upheld with a majority vote.

“The council’s website will be updated with details of the refund process shortly, at www.york.gov.uk/lendalbridge”

When confronted with the opinion of “a leading QC” – that it is legally sound to repay only those motorists who request repayment – a layman such as I can only bow to higher knowledge regarding legal interpretation, whilst observing that neither Councillor James ALEXANDER nor his spokesperson Debbie MANSON has thought it relevant (or politic) to address the ethical or moral aspects of the Council’s predicament.

Conclusion? City of York Council does not ‘do’ ethics and morals.

But it at least appears that Richard PEARSON and I are not entirely alone in our view that there may be a case to answer. I have received a rather unanticipated email from Mr Will NAYLOR, who is Chief of Staff to Police & Crime Commissioner Julia MULLIGAN, who has not previously acknowledged my emails (see here and here)

Thank you for copying us into your email.

I will ensure this is raised with relevant colleagues, and we will come back to you if necessary.

Chief of Staff to the Police & Crime Commissioner for North Yorkshire

So we must now await developments. If any. The CPS guidance can be found here.

But I leave readers to contemplate the likely consequences of you or I extracting £1,2M from around 53,000 innocent victims, then baldly declaring that we would repay only those who actively sought repayment. To my mind, that compound the original offence.

I have no doubt that you or I would face prosecution if we were to treat innocent people like that. And, returning to s.12 (2)(b) of the Fraud Act 2006, cited above and repeated her, for convenience of reference:

I can only wonder why the Members and Officers of the City of York Council should escape unscathed?

But then the ‘powers that be’ regard me as the devil incarnate for daring to express the ludicrously Utopian view that we should all be treated equally under the law. How absurd is that? 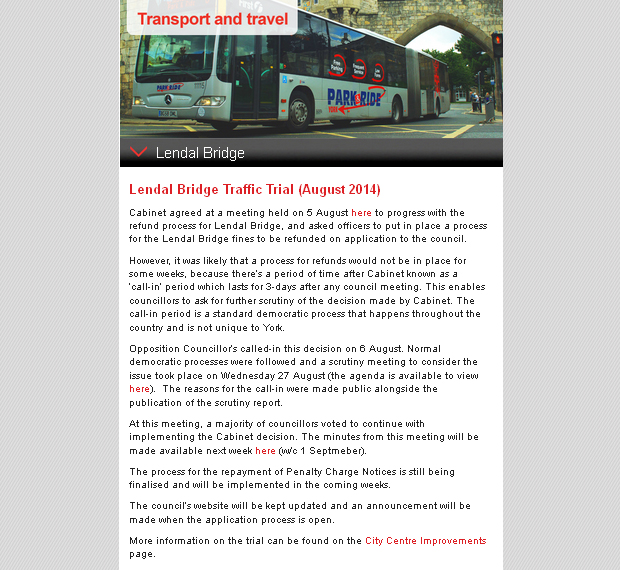 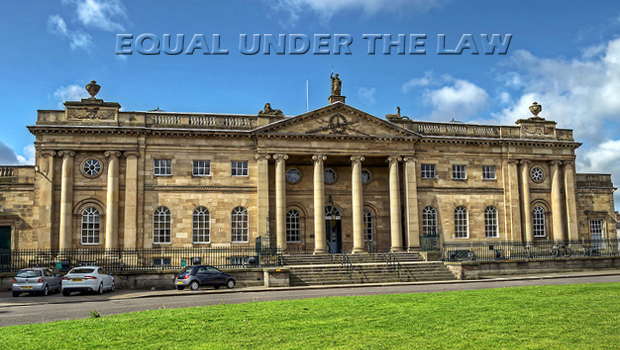