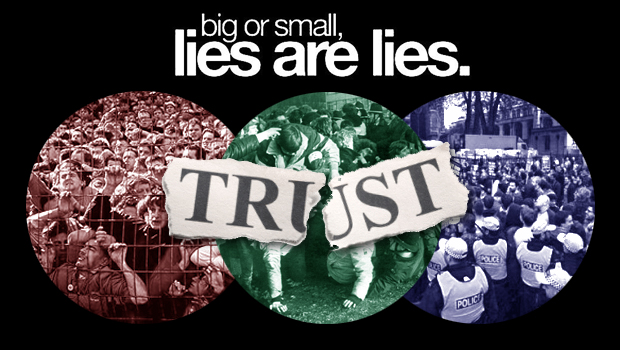 Following the North Yorks Enquirer publishing a public appeal for donations toward my legal costs in the on-going NYP civil harassment action against me, and my subsequent letter of thanks for the stupendous level of public support, many readers have raised the question as to how such an apparently rash expenditure of public funds could ever have been authorised – or, indeed, justified.

For rather obvious legal reasons, I cannot yet comment on the substance of the case, or on the identities of those who are making claim against me, so I hope readers will accept that I must tread very carefully indeed around the issues that I address in this article.

Innumerable examples of Police Officers lying in their witness statements, manipulating evidence and smearing innocent members of the public who champion the public interest have been exposed on the front pages of our national and regional newspapers lately in the aftermath of the Hillsborough inquests, which lasted for twenty-five months and cost the public around twenty million pounds.

The suspension and subsequent departure of former South Yorkshire Police Chief Constable David CROMPTON appears to me to be a derisory level of accountability for such shocking breaches of the public trust. His replacement Dawn COPLEY held on to this poisoned chalice for just 24 hours.

But it would be remiss of us all to be blinded by the glare of publicity surrounding the present scandal to the point of overlooking the fact that lying, manipulating evidence and smearing of the innocent has by now become a well-practised strategy of British Police Forces when confronted by allegations of incompetence, corruption and deceit.

In South Yorkshire Police (SYP), the twenty-seven years of Hillsborough follows the thirty-two years of Orgreave and the sixteen years of Rotherham child sex abuse.

The common thread is one of cover-up, devised and sanctioned not by the bobbies on the beat, but by ranking Officers all the way up to Chief Constable.

Readers who have followed my articles exposing the depraved exploitation of youngsters (of both genders) by Jimmy SAVILE and Peter JACONELLI and their associates in Scarborough will not have expected anything other than a desperate attempt on the part of North Yorkshire Police to silence me – and to silence my fellow NYE contributor Tim HICKS – and punish us for the humiliation we have visited upon them.

How could they be seen to be punishing us for telling the truth?

Of course, they could not.

Aside from framing us, what other strategy remained open to them?

That question can be answered in one word: 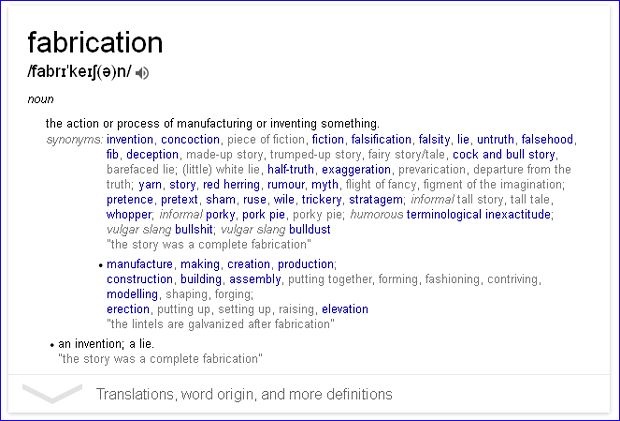 Fabrication is not the only form of lying. There is another, more insidious form:

The primary and fundamental element of public confidence in the Police is the expectation, which should amount to near certainty, that Officers and civilian officials can be relied upon to tell the truth – both pro-actively and by the avoidance of lies of omission.

As one would expect, dishonesty of both kinds is expressly proscribed by the College of Policing Code of Ethics.

According to the very first standard of the Code, one must act with honesty and integrity at all times

Examples of meeting this standard are when one:

The Force Solicitor for the North Yorkshire Police is Jane WINTERMEYER. Part of her remit and responsibility is the lawful conduct of the Civil Disclosure Unit – the NYP department that deals with FOIA requests.

Readers will be aware that the Freedom of Information Act 2000 requires public authorities to disclose requested information within 20 working-days of receipt. Let us objectively examine how well Jane WINTERMEYER fares when the above tests are applied to her professional conduct.

On 20th May 2015, following an inadequate response to an earlier FOIA request, I lodged a supplementary FOIA request with NYP. This request was acknowledged on 22nd May 2015 in the following email:

On the following dates, I politely reminded Emma MORRIS that my request was still outstanding:

On 27th November 2015, I received an incomplete response.

On 9th December 2015, I politely requested the rest of the information.

On 9th March 2016, I received an apology from Emma MORRIS, stating:

“I am in the process of finalising a response to your queries and I will send this through to you in due course. We have received a number of requests on this topic and unfortunately due to an administrative oversight your further correspondence was overlooked at the time.

I will be in touch with a response as soon as ever possible.”

I replied, asking Emma MORRIS when “as soon as ever possible” might be. She did not respond.

On a number of occasions, I have tried asking Will NAYLOR, Chief of Staff to Police & Crime Commissioner (PCC) Julia MULLIGAN –‘The Voice of the People’ – to persuade the PCC to intervene on my behalf to obtain full disclosure on my FOIA request. All to no avail.

Set this in the context of the fact that throughout the past two years I have met with and provided invaluable information to Operation Hibiscus, the NYP detail examining the historical crimes of Jimmy SAVILE and Peter JACONELLI. I did so most recently only a couple of weeks ago. And only a couple of days ago, I sent further information regarding child sexual abuse crimes to (T) Det. Insp. Phil COWARD. The latest indications are that the SAVILE/JACONELLI investigations will be re-vitalised by the GODDARD Inquiry – Norfolk Police Chief Constable Simon BAILEY estimates that about 200,000 cases will be investigated. He said, “Behind each of these figures there is a victim”.

In fairness to Emma MORRIS, I can only conclude that it is not she who is so shamelessly flouting the law – the Freedom of Information Act – by evading full disclosure; rather, she is simply following orders the ultimate responsibility for which rests with Force Solicitor Jane WINTERMEYER, whose Witness Statement against me may be seriously compromised by full and truthful disclosure of the answers to my questions, the answers to which have been withheld for a year now.

Withholding information is lying by omission.

It is seminal to compare the above FOIA non-responsiveness to the wider record of NYP in relation to FOIA requests, as disclosed in the following extract from a separate response to an FOIA request from another member of the public: 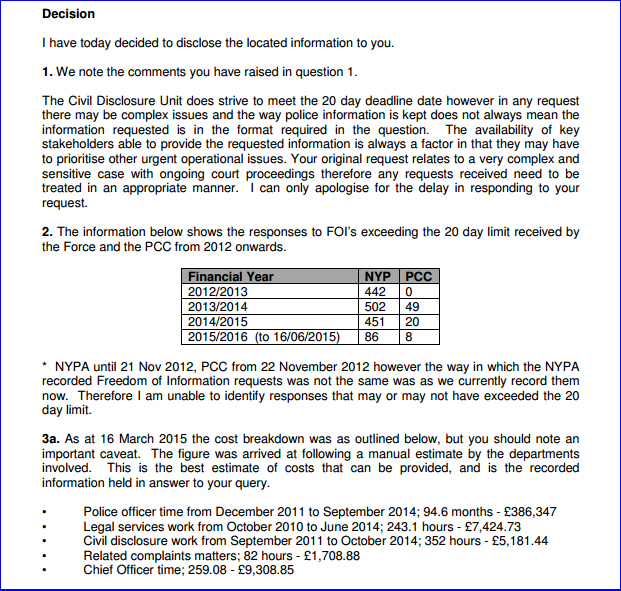 Bear in mind that 86 in the first nine weeks of the 2015/16 financial year points to a likely annual total of around 497 – which would bring the total for the last four financial years to something approaching 2,000 failures to comply with the law.

Thus, the authority entrusted with enforcing the law in North Yorkshire can be seen to hold it in flagrant disregard.

Interestingly, in a recent surgery meeting with investigative-journalist Neil WILBY, Police & Crime Commissioner Julia MULLIGAN offered the assurance that the 2015/16 figures would be substantially lower, due to increased manpower having been made available.

And, equally interestingly, the above response discloses that £409,970.90 was spent pursuing me BEFORE the present legal action was even filed – (see questions 4 & 5 raised in my own FOIA, above).

This matter has been comprehensively covered by Neil WILBY in an article entitled “409,970 Reasons Not To Trust North Yorkshire Police”, which has stood unchallenged in the public domain since 20th March 2016, despite the courtesy of the usual ‘right of reply’.

But even this deplorable saga of lawless disregard for statute and the Code of Ethics, not to mention the  profligate waste of the public purse, pales into relative insignificance when compared to the blatant falsehoods present in Jane WINTERMEYER’s documentation in my civil case, which contains “lies, manipulation of evidence and smearing” – the stock-in-trade of today’s Police Forces – and, indeed, a departure from the truth that appears in another serving Officer’s evidence.

Only Court protocol prevents me from reciting them here.

I did, of course, email PCC’s Chief of Staff Will NAYLOR, offering ‘right of reply’ to himself, the PCC for North Yorkshire and the NYP Force Solicitor; no acknowledgement or response has been forthcoming from any of the three.

Meanwhile, my profound and limitless thanks to readers who have supported my voluntary work in the public interest by continuing to contribute donations to my legal costs via PayPal (below, left) and GoFundMe.