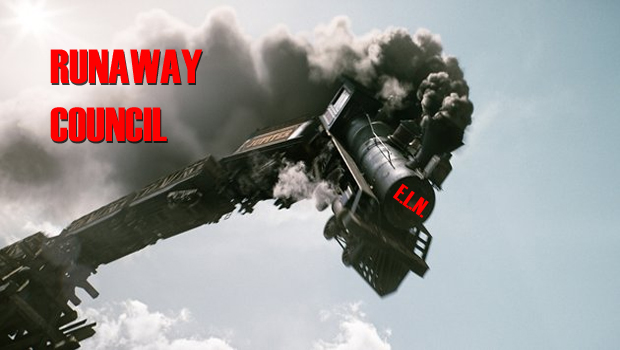 Regular readers will already be familiar with eight previous reports detailing the many failings of Exelby, Leeming & Newton Parish Council, situated between the delightful market town of Bedale and the County seat of Northallerton, where both Hambleton District Council and North Yorkshire County Council preside over the locality’s local governance: 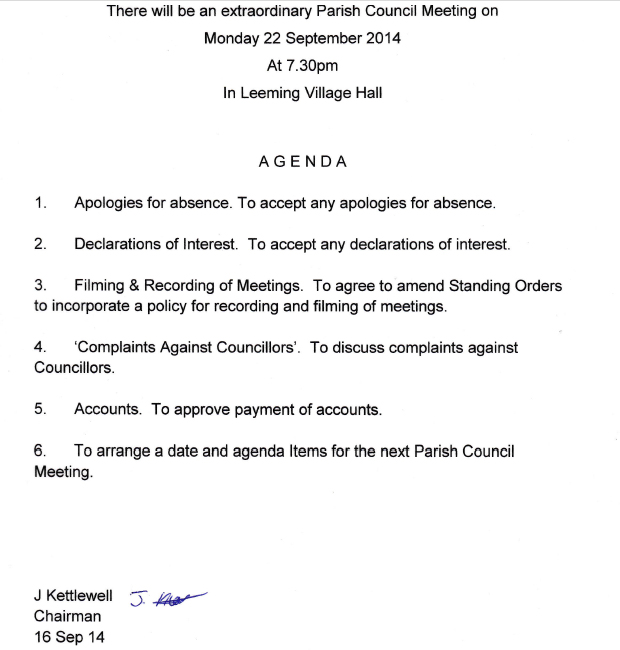 Unsurprisingly, this document falls short of being a legally valid Notice – and for more than one reason.

Firstly, ELN’s own Standing Order 4.9 states that the Minutes of the preceding Meeting must be ratified as a true record by Council at the following Meeting, and signed off by the Chair.

Yet Councillor John KETTLEWELL, that paragon of incompetence at the controls of this runaway Council, has omitted to include an Agenda Item in compliance with his Council’s own Standing Orders.

Secondly, Item 4 of this Agenda is not preceded by the necessary opportunity for the Council to invoke the exemption of press and public during the discussion of Item 4 itself. Leaving aside, for the moment, the form of words – ‘Complaints Against Councillors’ – which is itself ambiguous in the light of the fact that Formal Complaints remain pending against both former Councillors who have recently resigned (and who are, therefore, not Councillors but members of the public whose personal data may not be discussed in open Council) as well as present Councillors –  there is also an issue regarding the identities of those members of the public who have lodged Formal Complaints against Councillors (or former Councillors) and the Clerk, whose personal data, as Complainants, is protected under the terms of the Data Protection Act 1998, and may therefore not be disclosed in open Council.

Yet the identities of the Councillors and former Councillors who are subjects of these Formal Complaints are carefully concealed by the Agenda’s form of words.

In mitigation of the Chair’s incompetence in the matter of the unlawful Agenda, it should be remembered that Parish Clerk Margaret STEAD – who is employed by the Council not only to prepare Agendas and Minutes that comply with the law, but also to advise Chair and Councillors on points of law – has been absent from her post since very shortly after the Extraordinary Meeting of 21st July 2014 (the infamous ‘Rent-a-Mob’ incident). Her record shows that she is not competent to advise Council on points of law. 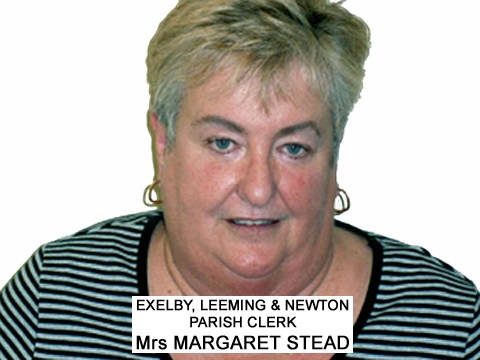 Be that as it may, we once again are faced with evidence of a ‘runaway’ Council – three of whom have already washed their hands of this ‘Carry On’ catastrophe, and four of whom are either the subjects of rigorously-documented Formal Complaints, ICO investigations or criminal investigations, whose ostensibly elevated status as Councillors has ‘runaway’ with them. Delusions of grandma, as I like to say.

Hambleton District Council Monitoring Officer Gary NELSON – himself the subject of an as-yet unsatisfied formal Corporate Complaint in respect of his repeated misinformation to me regarding the terms of his statutory duties – has kindly provided an up-to-date list of the present incumbents of Exelby, Leeming & Newton Parish Council. Readers will (I hope) be unsurprised to learn that not one of these received a single vote at the ballot-box. If ever there was a case made for electors to actually nominate candidates and cast their votes – votes that their forebears may have sacrificed their lives to claim – then cast your eyes over them now; the case is made. To be clear, when Councillors are elected unopposed, there has been no ballot (since the result, with only one candidate, would be a foregone conclusion).

HDC Monitoring Officer Gary NELSON was unable to inform me of the names of the Proposers and Seconders of the Councillors because that information is not held by HDC and it appears that nobody at HDC ever bothered to ask ELN to provide it. Of course, the Parish Clerk Margaret STEAD had a duty to do so.

So we know of nothing that would dispel the very disturbing suspicion that these Councillors actually nominated one another.

Nothing on the public record suggests that the Councillors have followed either the letter or the spirit of the electoral and democratic procedures that we rely upon to underpin the accountability of the people we elect.

To all intents and purposes, then, the Councillors of Exelby, Leeming & Newton were effectively self-appointed – with the exception of Brian SHUTTLEWORTH who was simply cronied on board.

Of the remaining four, only Councillor Frank HERBERT has a clean sheet.

Vice Chair Councillor Dorothy DIXON faces investigation regarding her failure to declare her interest in a Planning Application debate, and then actually taking part in the Agenda Item whose resolution was to recommend Planning Consent. That may be the clue as to what motivated Dorothy DIXON to sign up to the Parish Council in the first place.

Councillor Louis ROBINSON (or ‘Lawnmower Man’, as he is known in the village) has held the grass-cutting contract at ELN since May 1999, with no available record of proper tender processes or required advertisiments/Notices, and only the Parish Clerk’s assertion that renewals were “verbal agreements” with Louis ROBINSON, after she had “telephoned around various companies” of her own choosing and passed the job back to one of her own Councillors. Nice work, if you can get it. No doubt Louis was suitably grateful. I wonder whether or not he threw in cutting Margaret STEAD’s grass as part of the deal?

Chair Councillor John KETTLEWELL is also on the receiving end of a whole raft of allegations, all of which add up to an almost total dereliction of his statutory responsibilities, in defiance (born of ignorance or arrogance) of all seven of the Nolan Principles of Public Life. 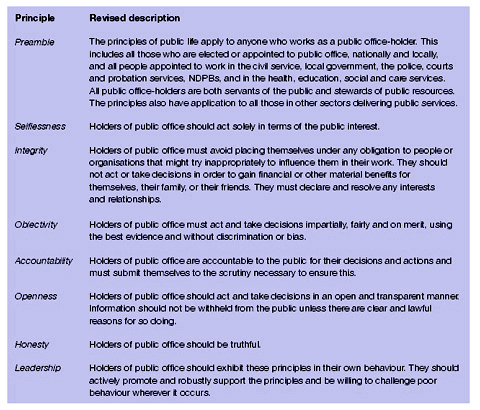 Perhaps Councillor John KETTLEWELL will explain how the rounding-up of the 21st July 2014 ‘Rent-a-Mob’ fits into Lord NOLAN’s vision of democratic accountability?

Hambleton District Council Monitoring Gary NELSON has been made aware of the unlawful nature of the Agenda for the Extraordinary Meeting on Monday 22nd September 2014. One can only hope that he has the inclination and good sense to intervene.

Meanwhile, Andy and Michelle DOLAN have today met with their MP, former Secretary of State William HAGUE, who has indicated that he will be referring the matters raised to the Department for Communities & Local Government (Eric PICKLES’ office). He will also be writing to Hambleton District Council directly.

Following the physical assault on Andy DOLAN at the 21st July ‘Rent-a-Mob’ Meeting, the North Yorkshire Police have been reminded of their Duty of Care in respect of Monday’s Meeting. I am grateful for their consideration.

Hopefully, Monday’s Meeting – if it does take place – will be conducted in a more civilised manner.

In any event, it will be filmed – for posterity.

Hambleton District Council in the news again – for all the wrong reasons: