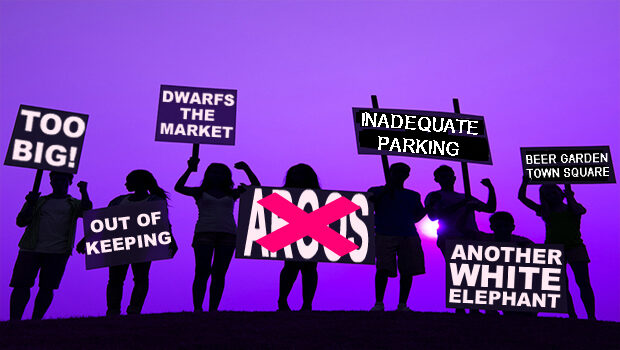 As was expected, the Castle Ward Tenants’ & Residenst’ Association (CWTRA) meeting, held at Scarborough  Library on Tuesday 23rd November, where Council Officers would supposedly give a presentation outlining their plans for the ARGOS scheme (scam), quickly turned into what can only be described as a pathetic Town Hall attempt to try and sell the scam to an increasingly disbelieving audience.

The audience, made up mostly of Old Town residents, were initially treated to a confident opening by heavy weight Council Officer Marc (£120 grand a year) Cole setting out the Councils plans for the ARGOS site.

However, as big hitte,r Cole has no connection with Scarborough, and knows nothing of the Old Town and its residents, it soon began to dawn on him that the very vocal and very angry residents of the Old Town, who are totally against the ARGOS scam, were not going to have any of his Council bullshit.

As Cole presented to his audience each of his obviously well-rehearsed reasons why they should just roll over and have the ARGOS scam imposed on them, residents quickly demolished the lies and misinformation he tried to make them believe.

Like the snake KA in Kipling’s Jungle Book, with its beguiling eyes swirling and its smooth talk flowing, Cole tried his best to make his audience accept that having a barrack block of 200 plus bedsits plonked on their doorsteps would be good for them.

NO, IT WOULD NOT, they told him.

The £22 million the Council would borrow to fund the project  (more likely £30 million) would not, according to Cole, have to be paid back by residents, the bedsits would make a profit and FutureLets, the letting agents working for the University, would make so much money that not only would they be able to repay the loan, they would also be able to give ratepayers a return on their investment.

NO, THEY WILL NOT, they told him.

You ill-informed residents, you don’t understand, was Cole’s underlying message. You don’t want a beautiful TOWN SQUARE which will bring enjoyment to thousands and enhance the whole town, as was established by the Kissing Sleeping Beauty report. No, you silly residents, you need a block of bedsits which we, your very clever Officers, will build for you.

I could go on, but residents throughout the Borough already know how this disgraceful Council works. The whole meeting, and Cole’s outrageous claims for the ARGOS scam, were, in fact, nothing more than a Council-inspired propaganda exercise.

There was no attempt to be even-handed, no vague reference to the truth and certainly no consideration of residents’ wishes.

However, Old Town residents were not going to have this out of town NOBODY telling them what they should and should not have and they quite rightly told Cole where he could shove his ARGOS scam.

The Old Town residents’ total rejection of the ARGOS scam will, however, one suspects, not stop the TOWN HALL from continuing to try and force ratepayers to pay for this monstrous carbuncle. There is simply too much money at stake; the developers alone stand to gain at least £3 million and who knows what the consultants will skim off the top?

Nonetheless, although the TOWN HALL will no doubt keep pushing the ARGOS scam, Old Town residents were not fooled by the smooth-talking Cole.

Judging by the outcome of CWTRA meeting, no-one is under any illusion that the ARGOS scam has anything to do with regeneration.

THE COUNCIL IS LYING.

Judging by the outcome of CWTRA meeting, no-one believes that the Council is benevolent and that it wants to provide accommodation for students.

THE COUNCIL COULD NOT GIVE A TOSS ABOUT STUDENTS.

Judging by the outcome of CWTRA meeting, it is clear that no-one remotely imagines that the current administration and its Officers are pushing the ARGOS scam because they think it will be good for residents.

THE COUNCIL DOES NOT GIVE A DAMN ABOUT WHAT THE RESIDENTS WANT. THE ARGOS SCAM IS ALL ABOUT WHAT COUNCIL OFFICERS WANT.

So let’s be clear, it is abundantly obvious what SBC Officers, and indeed what the Leader of the Council, Siddons, wants – and that is the ARGOS scam in all its £30 million pound glory.

However, they know that in a few months’ time, Scarborough Council will cease to exist and its borrowing powers will be gone. The new Unitary Council will be formed in May and once it is established, Officers at SBC will have very little power to do anything.

This reality is, of course, fully understood by SBC Officers and they are no doubt, as we speak, looking to where they will find their next victims.

The Council and its Officers, and Siddons, are, in fact, in a race against time. If they do not get the ARGOS scam signed off before May, they will never get it through.The gravy train will have left the station.

So the question might fairly be asked: will SBC Officers get their first class tickets on the Orient Express, paid for by Scarborough Borough ratepayers?

The jury, I would suggest, is still out.

However, with so much ratepayer money up for grabs, my guess is that they will keep on trying to get their grubby little mitts on the loot right up until the bitter end; regardless of residents’ objections.

Arrivederci suckers; says it all really.