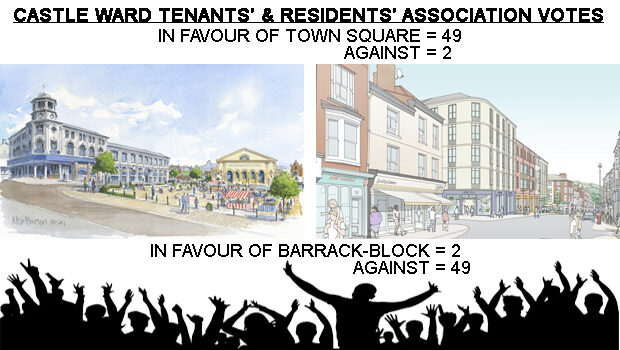 Last night’s meeting of the Castle Ward Tenants’ & Residents’ Association (CWTRA), according to reports from those present, was an acrimonious affair, characterised by the by-now customary platitudes and misinformation provided by Council Officers (who are not resident in the Ward), on the one hand, and penetrating (but unanswered) questions from residents, on the other.

The Leader responded to his invitation thus:

Thank you for your invitation. I’m sorry that I will not be available to attend this meeting which is primarily for Castle Ward residents. I know that the officers present will provide a comprehensive presentation on the redevelopment of the former Argos site.

You ask for a political dimension to the debate. This project was conceived during the last Conservative administration and was supported by the vast majority of Elected Members across the political spectrum when the scheme was approved in July 2019.

Following that Council decision, a legally binding contract was entered into to prepare and develop the scheme which will now go before Planning Committee. That contract IS legally binding.

The University are fully committed to this scheme and it forms the basis of their expansion plans which will see up to 5000 students receiving professional training within the town. This would not be possible without this project.

A number of concerns have been raised by residents and that is why I have asked for a short delay in planning to ensure those concerns are addressed and explained and residents views are listened to.

I would also remind you that extensive consultation has also been carried out with a wide range of other groups in the town.

The purpose of these consultations is to provide information on the proposals and answer any questions stakeholders may have. We are also attempting wherever possible to consult with groups and organisations who’s views are typically underrepresented.

Stakeholder groups we have now confirmed dates / undertaken consultation with, include:

Wider awareness raising and consultation across the borough is being undertaken through traditional and social media channels, examples include but are not limited to:

the Council’s own webpage; https://www.scarborough.gov.uk/latest-news/leader-statement-former-argos-proposals

the Scarborough News and of course the planning portal.

Scarborians in the education sector have expressed astonishment to learn that the CU campus has facilities for 5,000 students and wonder where the Leader obtained this figure.

The Enquirer has since had sight of an FOIA request, as follows:

Please provide copies of the formal responses received from the following groups as derived from the SBC consultation meetings with regard to the proposed Argos development.

The Enquirer hopes to publish the Response (if any).

Councillor COLLING stated merely that she was “unavailable”, leaving the Officers to take the flak (of which there was plenty):

I am unavailable this evening so will not be able to attend the meeting.

I am confident that the officers who have had this in their diary for some time can answer any issues raised.

Firstly, those FOR (2) and AGAINST (49) the barrack-block ‘regeneration’ of the ARGOS site;

Insider sources are now reporting that the talk within the Town Hall is all about deferring the Planning Application until the New Year.

It would appear that the SIDDONS administration will not take “NO!” for an answer.

Meanwhile, time is working against the Leader’s demolition/re-build option, as construction/labour/transport costs are escalating daily. Perhaps the voice of the people will prevail after all. 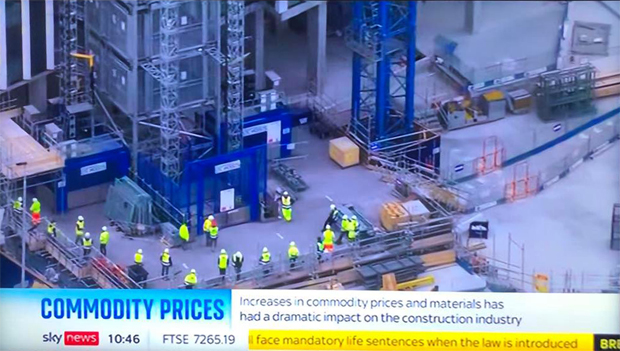