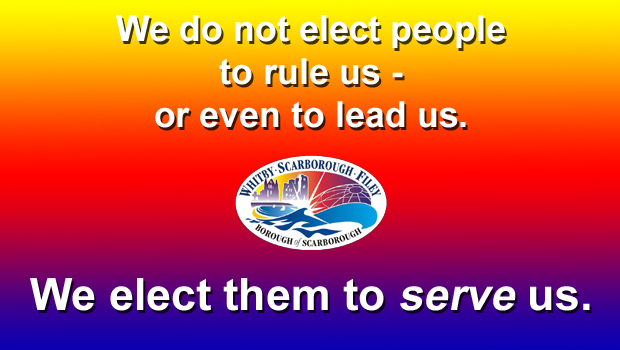 Guest Author NORMAN MURPHY, Alderman of the Borough and a Councillor of 20 years experience, shares his views on SBC’s totalitarian stance on criticism.

As many of you will know, only too well, I suspect, Scarborough Borough Council (SBC) operates and rigorously enforces a system of censorship which they call the “Vexatious List”. The SBC “Vexatious List” is, in fact, a form of POLICE STATE repression, imposed viciously by the Council on the general population of the Borough: you in fact!!

The “Vexatious List” has a single objective; the suppression of any form of public criticism of, or objection to, any plans, schemes or loony left ideas the current Labour leader, Steve Siddons, and of course senior Council Officers, wish to inflict on the good people of the Borough.

The SBC “Vexatious List” is, as many people have pointed out, STATE suppression of the worst kind. Similar “Lists” exist in totalitarian states such as China, Russia, North Korea and, for some years now, the Borough of Scarborough.

The “Vexatious List” operated by Siddons, in fact, contravenes Article 19 of the United Nations Declaration on Human Rights which states that:

Everyone has the right to freedom of opinion and expression; this right includes freedom to hold opinions without interference and to seek, receive and impart information and ideas through any media and regardless of frontiers.

So why, I hear you ask, given that the “Vexatious List” has such a villainous pedigree, is such a “List” allowed to prosper in the Borough of Scarborough? Well, the answer is that although the “Vexatious List”, was, in fact, introduced by the previous Conservative administration, it supports perfectly the dictatorial style of leadership that Leader Siddons and his loony left cronies want to impose on residents; and so it continues.

It should, however, be noted, that the “Vexatious List” was, prior to the 2019 local elections, vigorously opposed by Siddons and the Labour Group.

As has been pointed out on several occasions, Siddons right-hand man Tony Randerson [Lab.] (Eastfield Ward), and we must not forget Independent Group Leader and Portfolio Holder (and, it follows, staunch Siddons supporter) Janet Jefferson, [Ind.] (Castle Ward), all spoke out against the “Vexatious List” on many occasions and vowed (prior, of cours,e to the 2019 elections) that if they ever got into power, they would have it scrapped.

Well, needless to say perhaps – now that they have got power, the vow to scrap the “Vexatious List” has suddenly evaporated and indeed the “List” grows longer as each day passes. As the volume of public unrest and open dissent increases, with each loony decision Siddons and his cronies try to inflict on residents, the cries of despair get louder and the “Vexatious List” gets correspondingly longer.

To Siddons, the seven Nolan Principals, listed below, which clearly set out out how public servants and elected members should conduct themselves, do not, it seems, apply.

Selflessness – Holders of public office should act solely in terms of the public interest.

Integrity – Holders of public office must avoid placing themselves under any obligation to people or organisations that might try inappropriately to influence them in their work. They should not act or take decisions to gain financial or other material benefits for themselves, their family, or their friends. They must declare and resolve any interests and relationships.

Objectivity – Holders of public office must act and take decisions impartially, fairly and on merit, using the best evidence and without discrimination or bias.

Accountability – Holders of public office are accountable to the public for their decisions and actions and must submit themselves to the scrutiny necessary to ensure this.

Openness – Holders of public office should act and take decisions in an open and transparent manner. Information should not be withheld from the public unless there are clear and lawful reasons for so doing.

Honesty – Holders of public office should be truthful

Leadership – Holders of public office should exhibit these principles in their own behaviour. They should actively promote and robustly support the principles and be willing to challenge poor behaviour wherever it occurs.

Indeed, as someone commented only recently, Siddons most likely thinks the Nolan Principals are a girl singing group from Northern Ireland. And judging by his actions over his term in office, it is difficult to disagree.

Not, I would suggest, a code of conduct that current Leader Siddons would recognise.

In May 2022, possibly sooner if there are any local by-elections which there may well be, Siddons and his loony left Labour cronies, will once again be asking for your votes, I would therefore suggest, keeping the above very much in mind, that all voters in the Borough of Scarborough consider very carefully how they cast their votes, as, if comrade Siddons wins, and you don’t like his policies, there is always more room on the “Vexatious List”.

Oh, and by the way, I have it on good authority that there are a group of builders in Tuscany becoming very worried about getting paid for building a rather swish villa for some English guy, apparently if they send him anymore bills they might also be put on the “Vexatious List”.