Letter to the Editor: That Councillor Siddons Interview

I am writing to chip in my two-penn’orth on the recent spate of articles in the NYE on the controversy over the Council’s management of Whitby and Scarborough Harbours.

I think that both Nigel Ward and Allan Roberts have done an excellent job of raising this vital local issue. In particular, I thought that Nigel Ward’s article “Whitby Harbour: Payback Time” was a corker. It covered the key issue very well and also contained arguably one of the worst television interviews with a senior local politician I have ever seen:

Commenting on the future NY Unitary Authority (a “dog’s dinner”)

This ranks as one of my favourite “worst interviews given by a politician”.

Some of the others are below and are all worth watching if you want a good laugh.

By challenging the actions of the Council through legitimate public criticism and by encouraging debate, the NYE has contributed to public debate over the harbours issues. Perfectly illustrating the vital importance of having a strong vibrant local news outlet in North Yorkshire.

In 2017, Councillor Randerson (supported by Councillor Jefferson) castigated the Council for intercepting Councillors’ emails, to prevent them from receiving emails from NYE journalists. He made his criticism in Full Council with his boss Councillor Siddons by his side, before walking out of the Chamber in disgust.

On the day he was elected Leader of Scarborough Borough Council, Councillor Siddons promised that his election would usher in “a new era of openness and transparency”. He then continued seamlessly with the policy of media suppression of the previous Conservative administration that he and Councillor Randerson had been so critical of when they were in opposition. A very clear case of blatant hypocrisy.

This prompted the photo0n below in the NYE, recommending Councillor Siddons for the Order of Lenin for his services to repression of a free press in Scarborough. 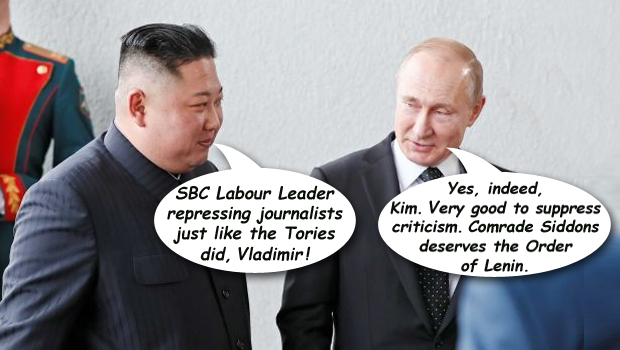 However, when I read Nigel Ward’s article on the covert purchase of The Shakespeare public house, “SBC’s Secret Property Purchase Revealed”, I realised that the NYE team had completely underestimated Councillor Siddons’ ability and the degree of repression that  he would impose:

This state of affairs has not previously been seen in any local government organisation in the history of this country. It is particularly incomprehensible that Councillor Siddons has been allowed to impose his will on the Council in this way, given that the Council is made up of 46 elected members and Councillor Siddons’ Labour Group only has 13 members.

The Labour Party did not state that this would be the way they would run the Council during the pre-election canvassing. They consequently have no mandate from the electorate to operate the Council in this way.

Given his lacklustre performance on the BBC, being interviewed over the new Unitary Authority, it appears to me that Councillor Siddons is uncomfortable with the media. If this is so, it may explain why Councillor Siddons has consistently tried to suppress a local media outlet that has consistently provided incisive criticism of his policies and leadership – in which case, his aggressive media policy is at least rational.

However, from the wider perspective, the way Councillor Siddons has repressed normal standards of openness in SBC is incompatible with his position as a Labour Party Councillor leading what is supposed to be a democratic, open and accountable Council.