Following this latest in a long line of secret and autocratic Decisions taken by our ‘Open & Transparent’ Leader, Opposition Councillors were forced to insist on disclosure of the identity of the property in question. This was at first strenuously resisted. Finally, however, on Monday 26th July 2021, members were provided with the ‘secret’ Appendix to the Leader’s Decision (see above) – in the customary paranoid manner.

In a futile attempt to prevent a ‘leak’ of the information to the North Yorks Enquirer, each Councillor’s copy was imprinted with a ‘watermark’ identifying the recipient Councillor’s name, so that should a copy of the document show up on the Enquirer, it would be clear which Councillor had committed this serious breach of ‘confidentiality’.

Unfortunately, with the usual display of utter incompetence that has become the hallmark of Legal & Democratic Services, a monumental cock-up ensued.

I can confirm that at least four Councillors (and I will surely hear of more) received documents bearing a ‘watermark’ of a Councillor other than the intended recipient. Duh! Can these nincompoops do nothing right?

This means that – as was the case with the infamous ‘leak’ of the July 2019 ARGOS papers – every Councillor must now stand under suspicion until such time as the Monitoring Officer successfully investigates who it was who ‘leaked’ the information. Clearly, this will be impossible. Prepare to hear more empty rhetoric about how the guilty party risks a life sentence for Misconduct in Public Office. And bear in mind that on the last occasion, North Yorkshire Police confirmed to me that no criminal offence had taken place and the matter could be dealt with only by the Council’s Standards Committee. Needless to say, no Standards hearing has ever taken place. This is unsurprising because the Leader could never permit the culprit to be formally identified as one of his ‘hand-picked’ Cabinet Portfolio Holders.

I can also confirm that the property in question is The Shakespeare public house (vacant for some two-and-a-half years), opposite the entrance to the Market Hall. The property backs onto the former ARGOS building. 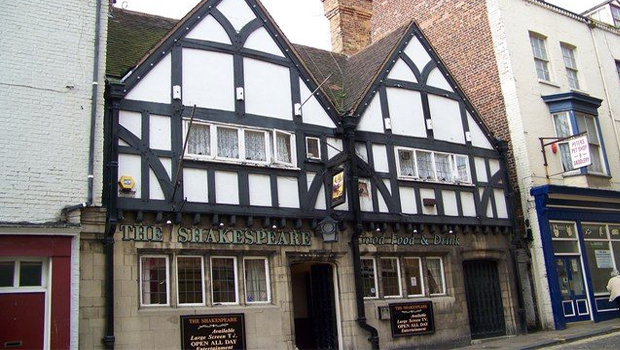 One school of thought – the optimistic school – is that the Council has finally abandoned the monstrous cell-block for 210 students/nurses – what used to be know as “SIDDONS’ FOLLY” (by now, there have been so many follies that the sobriquet no longer serves any purpose) – and has opted for the much sought-after large-scale Town Square.

But do not count on it.

The other suspicion is that the ARGOS ‘regeneration’ is still on the cards and the vacant lot left by the demolition of the toilet block, the newsagents, The Shakespeare and the Eastern Paradise (Indian restaurant) will become a diminutive version of a Town Square, squashed betwwn the Market Hall and the students/nurses cell-block.

However, with Pavilon House and the old Comet building still on the market, as well as the former Tech College adjacent to Scarborough Hospital, there remains a slim chance that commonsense may prevail.

But don’t count on it.