In an unprecedented flurry of ‘leaked’ emails from SBC Councillors and other reliable sources, I can now disclose the following:

In an email to all Councillors from Councillor Liz COLLING [Lab.] (widely regarded as Leader Councillor Steve SIDDONS’ personally-appointed Deputy), allow me to reproduce the following opening excerpt (the full email can be saved for another day):

I thought it helpful if I supply further information to you all in advance of the council meeting on Monday and the motion on the former Argos building Here are some key points When full Council approved this project in 2019 we set expect outcomes and a budget for the scheme. – Those outcomes and the budget have not changed to date.

– The contract remains in place with both sides bound legally by its provisions.

– The agreement is subject to conditions relating to planning and viability.

– If the scheme fails to meet the tests around viability, which would be affected by any actual identified rising costs, then the redevelopment on this basis would not proceed.

– We have had no indication from the developer that it is concerned about the financial viability of the scheme, due to rising costs in the market or otherwise.

– If the budget has to be changed, whether due to rising costs or otherwise, this would need to be revisited by you as members of this Council and be approved by members.

Let me repeat, Councillor COLLING stated (presumably with the full knowledge and approval of her Leader):

“The contract remains in place with both sides bound legally by its provisions“, dated Sunday 5th September 2021.

Now compare this statement with the information set out in the following email from Mr James CORRIGAN to all Councillors (drafted, I do not doubt for one moment) by Mr CORRIGAN’s solicitors – LUPTON FAWCETT LLP:

I am disappointed that a member of this council has leaked my question to the NYE prior to the meeting tomorrow.

I copied all councillors in to the question so that you could each give consideration to these points in advance.

I have today been shown an e-mail sent to all members by the Cabinet member, which included confirmation that the contracts with the developer were in place. However, this is contradictory information to a letter sent to me by the S151 officer on Thursday 2 September 2021 in which he confirms that the contracts have not yet been signed with either the owner of the property or the developer. I’m not sure why this would be the case but perhaps is an area that should be explored when the agenda item is debated.

There is a possible explanation that the contracts were signed on Friday 3 September, but I doubt that is the case. So who is misleading who?

Please see the attached redacted letter. Mr Edwards confirms that the contracts have not been signed at 31 March 2021. He also confirms that he is not aware of any post balance sheet events. Surely the entering into a contract with a multi million value all to be financed by borrowing would be considered a Post Balance Sheet Event. The letter was dated 2 September 2021.

I am also concerned about the autonomy of the planning department as the live planning permission submitted In October 2020 has stalled for at least the last 6 months. Why has the statutory time limit of the application not been adhered to. Is it the case that planning is legally independent from influence of other Council departments so why has the application not progressed to a committee meeting? Or are they too busy to deal with this flagship project? 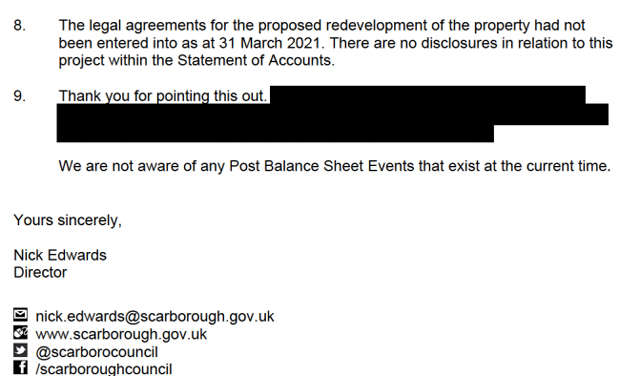 There is further evidence that the contract has yet to be signed. Readers will recall that the Enquirer, in the public interest, published the ‘Top Secret – Highly Confidential’ documents setting out the terms of the ARGOS deal.  The point of relevance reproduced here is:

However, the owners of the site – Bucchleuch Property Services Ltd (BPSL) – in their most recent accounts (available in the public domain), now sets the value of its listed asset (the ARGOS site) at £500,000 (five hundred thousand pounds):

How could Bucchleuch Property Services Ltd (BPSL) ‘write down’ (to half the agreed value) an asset already contractually bound to Scarborough Borough Council for twice that?

I am a cautious man; but it appears to me that somebody has been exceedingly economical with the truth.

Hopefully, all will become clear at Full Council on Monday 6th September 2021, at 2:00pm (broadcast ‘live’ on the Council’s YouTube Channel).

I shall be watching, and listening – most carefully.