The result of the 12th December 2019 General Election – an unprecedented rejection of Labour, even in stronghold constituencies like our neighbour Redcar – now casts a dark shadow over Councillor Steve SIDDONS’ Labour administration at Scarborough Borough Council that could well be likened to a nuclear winter. SIDDONS is going out now and, in the words of Captain OATES, he may be some time.

It has been said that all politics are local. Certainly – locally, as nationally – we have seen a string of rash promises, fence-sitting, dithering, U-turns and sheer folly.

Inevitably, talk of a No Confidence motion has been on the cards for some time. It now leaps to the top of the agenda.

Even before the BoJo bandwagon broke the sound barrier, I was being given to understand that, following widespread dissatisfaction with the present Leadership/Cabinet arrangements at Scarborough Borough Council, Leader Councillor Steve SIDDONS [Lab.] was already considering an attempt to salvage something from his fragile alliance with the Independent Group by re-vamping his Cabinet (hitherto comprising himself, Councillor Liz COLLING [Lab.Co-Op.], Councillor Tony RANDERSON [Lab.] and Councillor Janet JEFFERSON [Ind.]), by adding (most likely) Councillor Carl MAW [Lab.], plus two further Independent Group representatives – Councillor Sam CROSS (who would replace Councillor COLLING as Deputy Leader) and Councillor Phil KERSHAW. 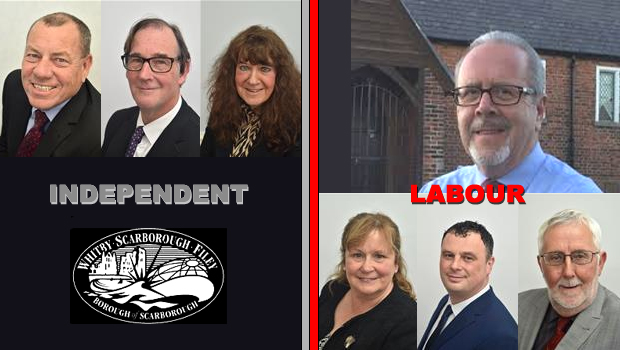 Thus, the ‘new’ six-strong Cabinet would be (or would have been?) equally divided between Labour and Independent, but with Leader SIDDONS always able to command an overall Labour majority. In other words, the Leader himself would retain total control (provided always that he could keep Cllrs COLLING, RANDERSON and MAW in line.

At least, this is one version of ‘reality’ that has been doing the rounds for the last couple of weeks – but all that, of course, was before the nationwide Labour rout.

For once, I have to agree with our five times MP, Robert GOODWILL [Con.]. Why indeed would the SBC Independent Group choose to prop up – or even be seen to be propping up – the nation’s biggest political losers in almost a century? And that is to say nothing about the pitiful standard of Leadership thus far.

It seems to me that Councillor SIDDONS had already scented a strong whiff of a forthcoming No Confidence motion and was hoping to appease the rumblings of dissent in the Independent Group by dangling a carrot, albeit one which would retain his own position as ‘Strong Leader’.

Readers will recall that Councillor Michelle DONOHUE-MONCRIEFF [Unaff.Ind.] has argued against the ‘Strong Leader’ model. From a democratic perspective, she has a point. But with the present three-way-split, now may be the time for the Borough to benefit from a genuinely strong ‘Strong Leader’ – which Councillor SIDDONS has shown he is not.

But the ‘Strong Leader’ model, though not etched in stone, cannot be revoked from one day to the next. In fact, the fundamental legislation [Localism Act 2011, Chs. 3 & 4)], though quite complex, is unequivocal. Added to which, it is almost invariably the case that Officers/Directors favour the ‘Strong Leader’ model; for them, it gives the Council a unified direction – which beats no direction at all.

Councillor SIDDONS has U-turned on the ‘vision’ he set out when first he became Leader – to distribute ‘power’ more homogenously throughout the whole Council. Having enjoyed a ‘honeymoon’ period devoid of challenge from the Tories, has he perhaps developed a taste for ‘power’? He has been very free with his Leader’s Decisions.

In fact, Councillor SIDDONS has executed a series of U-turns such that it is now more difficult than ever to discern his intended direction of travel. Perhaps Councillor SIDDONS is himself now confronting the same difficulty – which is a delicate way of saying that he may not have a clue whether he is coming or going.

I can help him with that; he is going.

Some members are clinging to a model with a more equitable distribution of ‘power’ – Leader [Lab.], Deputy Leader [Ind.], plus six Portfolio Holders [three of each, Lab. & Ind.], on the grounds that this would represent a more democratic basis for decision-making.

They are dreaming; it would also represent a recipe for deadlock.

Meanwhile, it is edifying to consider how (or if) any mooted forthcoming redistribution of the Portfolios would pan out.

Councillor Janet JEFFERSON [Ind.], whose aptitude for the Portfolio for Finance & Operations has recently been called into question by Enquirer harbours correspondent Allan ROBERTS, may be expected to concentrate on Tourism, where she would arrive in time to encounter the wrath of the Yorkshire Coast Levy Payers Association (YCLPA), recenty exacerbated by an extraordinary public outburst by one of the organises of the Whitby Krampus Run (video here). Until recently, Independent members were bemoaning the lack of information reaching them via Councillor JEFFERSON, to the degree that some were wondering whether or not she even belongs in the Independent Group.

One might perhaps have thought Councillor Andy BACKHOUSE [until recently Con. – now Ind.] a far more experienced Portfolio prospect than Councillor Phil KERSHAW [Ind.], who joined the Council for the first time in May.

One Portfolio which would have seemed certain to stay in the same hands would be that of Legal & Governance, where Councillor Tony RANDERSON [Lab.] would be needed to oversee the unenforceability of the SBC Car-Cruising PSPO and other costly follies – not least the shamoblic state of the Council’s CCTV operations.

When the present Leader assumed office, he spoke in terms of inclusivity; of there being valuable skills on all sides of the Chamber; of giving all Councillors the means to represent their electors effectively. But clearly Councillor SIDDONS now believes that 15 Tories, 3 CIMs, 2 Greens, 1 UKIP and 2 unaffiliated independents (i.e. 24 of the 46 – the majority) have nothing at all to offer his second attempt in seven months to form a viable Cabinet – he would be happy to leave the respective electors of those 24 powerless Councillors to whistle for their representation for the next three-and-a-half years.

In my view, any putative Cabinet re-shuffle that the Leader finds himself forced to countenance would be a hollow triumph of tribalism over inclusivity; of pragmatism over responsibility; of personal vanity over the common good.

But let us not rush to judgement; it is time to play ‘Fantasy Cabinet’ all over again and everyone is entitled to an opinion – even the 24 members who form the ‘wallflower’ majority.

I want a worthy Leader, a competent Rainbow Cabinet, and a progressive drive to turn Scarborough Borough Council into a Council of which we can be proud – not ashamed. I wish I could put a face and a name to that worthy Leader . . .

Certainly, a Vote of No Confidence in Councillor SIDDONS’ Leadership is the necessary first step and I expect it sooner rather than later.

Unless, of course, Councillor Steve SIDDONS has the good grace to step down . . .

. . . and a by-election in Weaponness & Ramshill would open the door to the return of the hugely popular Stormin’ Norman MURPHY – or the rather less popular Tom FOX . . .