As the ‘silly season’ draws to a close and our new Council Chief Exec Mike GREENE settles into the saddle, and with the first meeting of Full Council fast approaching (on 16th September 2019), it is salutary to remember that just because entries in the SBC Calendar have been sparse does not mean that the local politics jousting tournament has been in a state of suspended animation. The struggle for ‘power’ has, if anything, intensified.

The general sense of disappointment in Councillor Steve SIDDONS’ precarious alliance with the Independent Group, led by Councillor Sam CROSS, has been intensified by a number of shocking disclosures – not least, that of the Argos papers – which have set alarm bells ringing across the political spectrum.

Social media has been littered with comments to the effect that the less-than-popular former Leader, Councillor Derek BASTIMAN [Con.], suddenly appears more ‘professional’ in the light of the amateurish performance of the new Leader, with his ‘Cabinet-Lite’, his off-the-cuff remarks about Benchmark and Flamingo Land and an almost instantaneous departure from his professed credo of “openness and transparency”. The tail would appear to have found an easy dog to wag.

There has been much speculation as to how the rather unfortunate ‘deck of cards’ comprising 16 Tories, 13 Labour and 10 Independents (plus 3 members of the Cluster of Independent Members [CIM], 2 Greens [Grn.], 1 Kipper [UKIP] and 1 free independent) could be re-shuffled to deal a better hand to the residents of the Borough.

Many of my connections have been playing a game of ‘Fantasy Leader’ – second-guessing what changes of allegiances would be necessary to bring about a change of administration – and who would come out on top. The game goes something like this:

What if . . . the rank-and-file of any (or all) of the Groups were to rally to a new Group Leader?

How different would the future appear if one or more different Group Leaders were to emerge? Which of the following is most likely to exploit the imbalance of ‘power’? Who will re-establish local politics as something other than a branch of the entertainment industry? (“These questions—and many others—will be answered in the next episode of . . . Soap”).

Readers are welcome to play their own versions of ‘Fantasy Leader’ at home, with friends and/or family, but here are my own runners and riders:

The Cluster of Independent Members [CIM]

The CIMs have agreed to rotate the Group Leadership annually.

The only credible alternatives to present Group Leader, Councillor Sam CROSS, are:

The only credible alternatives to present Group (and Council) Leader, Councillor Steve SIDDONS, are:

The only credible alternatives to present Group Leader, Councillor Derek BASTIMAN, are:

For those who have already forgotten, Jane KENYON is a veteran of something approaching fifty years in local politics, and fifty Enquirer articles in which her activities have been widely rehearsed, but one story which was never explicitly disclosed was the truth behind the persistent rumour that Jane KENYON was involved in the trial of her one-time employer John POULSON, the corrupt Yorkshire architect who, together with T. Dan SMITH  (“The Mouth of the Tyne”) and 21 others, served prison sentences of up to seven years for practicing wholesale bribery to secure lucrative public works projects all over Europe and in the Middle East and West Africa. Sir Bernard KENYON, Jane’s father, narrowly (and some, say, miraculously) escaped that fate, despite having been simultaneously and clandestinely the Clerk to the West Riding of Yorkshire Council (a position equivalent to Chief Exec and Head of Paid Service, in today’s nomenclature) and a Director of several of POULSON’s companies – a conflict of interests of extraordinary proportions.

For reasons not fully revealed at the time, the key witness referred to in court only as “Miss X” was allegedly none other than Jane KENYON (b.1947).

I say “allegedly” for no good reason, really, since Jane KENYON herself confirmed that fact in a statement in The Birmingham Post of 8th March 1973:

That would appear to settle the mystery. But why the big secret?

Despite a number of embarrassing appearances in the Private Eye magazine (and it was the Eye, remember, who initially, along with the Bradford Telegraph & Argus, broke the POULSON corruption “scandal of the century”), there is more, far more, to Mrs KENYON-MILLER’s story than the angelic ‘official line’, as presented (by her) in the Scarborough News of 20th March 2007: 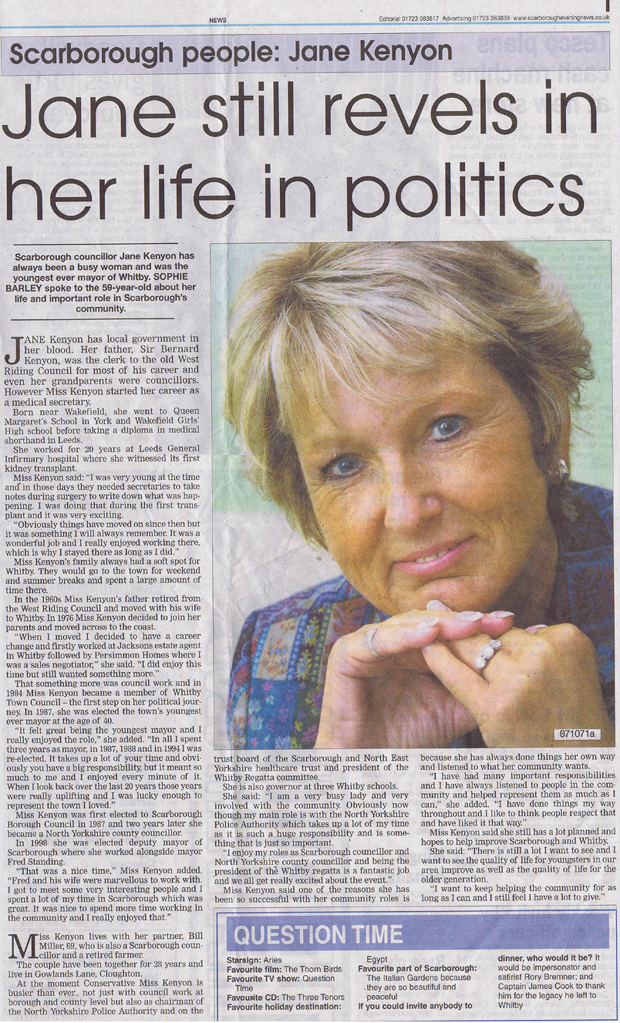 The Jane KENYON story is all about herself. And yet the full story has never been told . . . and perhaps never will be. We shall see. It may be of nothing more than historical interest. Certainly, any aspirations Mrs KENYON-MILLER may hold to becoming Leader of Scarborough Borough Council fall strictly into the realms of fantasy.

In my view, the present administration is looking increasingly like ‘Amateur Half-Hour’. It needs to buck up or pack up – the vultures are circling. Now that we have a new, younger Chief Executive, the Borough more than ever needs a dynamic and strongly-mandated Leader – one who is willing to engage with her/his critics, many of whom have viable suggestions to bring to the table.

Readers who found this article of interest may also wish to review my article of 22nd May 2015, entitled  Poulson: Conspiracy Theory “X”.