In response to my earlier article “Mayoral VFM” (13/06/21), offering a direct comparison of the relative frugality of the respective Mayors of Whitby and Filey in regard to their travel (mileage) expenses, I have been taken to task by a former Filey Town Councillor and close personal friend of the Filey Mayor, Councillor Jacqui HOULDEN-BANKS.

In a series of social media comments by the above-mentioned former FTC Councillor, I stand accused of omitting to mention that the Filey Mayor conducted a total of 82 civic engagements in the prescribed time period (the two Council years 2019/20 and 2020/21 – which included lockdown) in which she claimed a total of £1,310.34.

The thrust of my article was that, by comparison, the Whitby Mayor, Councillor Linda WILD, claimed no mileage expenses/allowances for travel to and from her Mayoral civic engagements or her attendance at the Council Offices. I suggested that this is commendable. (Please note, I did not make any suggestions as to whether Councillor WILD’s overall performance as Mayor was commendable; I have not scutinised her wider performance).

Even allowing (generously, and hypothetically) that all of Councillor HOULDEN-BANKS’ alleged 82 Mayoral civic engagements entailed her driving from her home in Scarborough to Filey and back (a round trip of circa 14 miles), this would amount to a total of 1,148 miles. At 45p per mile (the customary Council disbursement in respect of mileage expenses), this would amount to ‘only’ £516.60.

The sum actually claimed by Councillor Jacqui HOULDEN-BANKS, according to FTC Clerk Mr David LIDDLE, was £1,310.34, including £447.85 for the 2020/21 Council year – for much of which lockdown was in force and travelling, therefore, significantly reduced.

Thus, there is an apparent disparity of £793.74. Without levelling any allegations, I do believe that the matter of the Filey Mayor’s mileage claims calls for an explanation, which I have subsequently (alas, unsuccessfully) attempted to ascertain from the public record.

I did, however, manage to locate the following table of Councillor HOULDEN-BANKS’ Mayoral engagements in 2020/21 (in a policy document), which reveals only six official engagements in the 2020-2021 period: 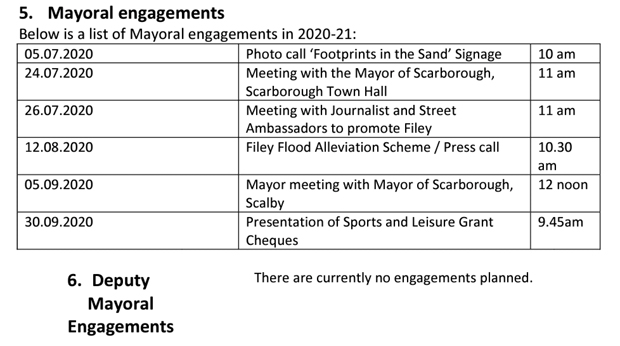 Two of these six 2020/21 engagements took place at Scarborough Town Hall and Scalby, respectively (Items 2 and 5), thus entailing minimal mileage (since Filey Mayor Councillor Jaqui HOULDEN-BANKS lives in Scarborough). But let us be generous and accept that these attendances may each have entailed a minimal 6-mile round trip. (Total: 12 miles).

As far as I can determine, the other four civic engagements took place in Filey, each entailing a 14-mile round trip. (Total: 56 miles).

According to FTC Clerk and Responsible Financial Officer (RFO), Mr David LIDDLE, the Filey Mayor claimed £447.85 during the 2020/21 period which, we recall, included lockdown.

Once again, there is an apparent disparity; this time of £416.35. Again without levelling any allegations, I believe that this, too, demands an explanation.

I mentioned, too, in my earlier article, that the Filey Mayor owns and operates a business in Filey, though one Facebook-user/resident asserts that this is more of a hobby:

What concerns me more is that another Facebook-user/resident, an ardent supporter of Councillor HOULDEN-BANKS, asserts that the Filey Mayor conducts ‘council business’ from her own business premises. Is this true? I am uncertain that is even permissible to conduct Council business at the premises of a private business, much less is it a legitimate destination for Mayoral mileage claims.

Please bear in mind that I have not criticised Councillor HOULDEN-BANKS’ performance in her Mayoral role; I have simply questioned the extraordinary extent of her mileage claims. And “No”, I am not by any reverse inference accusing the Whitby Mayor of being lazy. As a Whitby resident, I have seen first-hand how active Councillor WILD has been . . .

My critic, a former FTC Councillor and close friend of the present Filey Mayor, having slated me for not factoring in the Filey Mayor’s (alleged) 82 civic engagements, neglects to mention that I did not factor in the number of civic engagements attended by Whitby Mayor, Councillor Linda WILD, either. I did, however, commend Councillor WILD for claiming no mileage expenses whatsoever throughout the specified 2019/20 – 2020/21 period.

This like-for-like comparison formed the basis of my article.

In what way could I be guilty of bias for having treated both Mayors exactly alike?

For the sake of completeness, I should mention that the Whitby Town Clerk, Mr  Michael KING, informs me that the Whitby Mayor’s civic engagements are recorded only within the Minutes of monthly meetings and are not currently summarised in a separate list. But since the Whitby Mayor, Councillor Linda WILD has claimed no mileage expenses at all throughout the 2019/20 – 2020/21 period, a particularised list would add nothing to my like-for-like comparison, which concerns itself only with the total mileage recorded and the total amount of expenses claimed.

To my critics, I would say this: that loyalty is commendable and a very important factor in life generally, and in public life no less so. But blind support, in denial of the publicly available data, is merely misleading.

To disagree with my view on this, one would need to abolish Article 4 of the NOLAN Principles of Public Life (I have highlighted the salient clause in cursive script):

Those who may resent my scrutiny and/or the publication of my opinion are referred to Article 10 of the Human Rights Act 1998.

The NYE exists to hold public office-holders to account. That is the purpose of our endeavours. Ignoring the facts and attacking the integrity of a reporter because he has raised a well-reasoned concern about a public figure’s spending of public funds is unacceptable and rather juvenile. It is nothing more nor less than ‘shooting the messenger’ and contributes nothing towards revealing the truth.

My critics would do better to request the SBC Monitoring Officer to resolve the matter by conducting a formal investigation, ideally an investigation conducted with greater diligence than, for example, her investigation into the ‘leaking’ of the ‘Highly Confidential – Top Secret’ ARGOS regeneration project or the threats made by a Borough Councillor to murder her political opponents.

Far more prudent it may be to ask the Councillor for the Filey Division of North Yorkshire County Council to progress the matter?