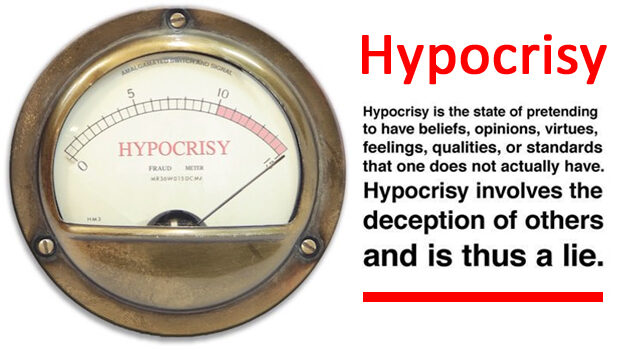 Regular readers will remember a recent article by TIM HICKS entitled “Ambush in Westminster”, in which he compared the rank hypocrisy of former Secretary of State for Health & Social Care, Matt HANCOCK, with that of Lisa WINWARD, Chief Constable of the North Yorkshire Police:

Tim’s main thrust was that the principal distinction between the two is that Mr HANCOCK, when caught out breaching the coronavirus regulations (which he helped to devise), had the good grace to resign his position – albeit somewhat tardily – whereas CC WINWARD, having herself breached the coronavirus regulations, proceeded to lead her Force to the most fervent prosecution of errant members of the public in the country.

I would now like to turn my (and readers’) attention to the rank hypocrisy evinced by the current Leader of Scarborough Borough – with every expectation that that gentleman will follow CC Lisa WINWARD’s example, and not that of Mr HANCOCK. Resign? Fat chance!

Several North Yorks Enquirer contributors have written, at length and repeatedly, about the present SBC administration’s departure from pre-election promises. The ‘flagship’ themes were hammered out as follows:

– all of which are legal requirements, by the way, are set out in the Localism Act 2020 and duly reflected in the SBC Constitution pusuant to Lord NOLAN’s Seven Principles of Public Life:

The present leader of SBC is Councillor Steve SIDDONS [Lab.] – who is ably abetted by his right-hand man, Councillor Tony RANDERSON [Lab.], along with the Leader of the Independent Group (his ‘coalition’ partners), Councillor Janet JEFFERSON [Ind.Grp.] – built his political platform round a moral armature of Openness, Transparency, Accountability and Inclusivity.

In fact, back on 17th February 2017, long before acceeding to the Leadership, Councillor SIDDONS made much of these virtues in the following speech:

For convenience of reference, here follows a transcript of Councillor SIDDONS’ too-easily-forgotten espousal of his obligations under the NOLAN Principles:

Read it and wince. That clarion call for “Openness and Transparency” hit a false note that almost immediately modulated into “Secrecy and Opacity”.

What should not be so easily forgotten is the fact that Councillor SIDDONS has been called out for his flagrant abandonment of his own word – his departure from “Openness and Transparency”, his exclusion of most of the Council membership from full knowledge of Council affairs, and his failure to hold even his own Portfolio Holders to account – in not one but two Votes of No Confidence within the first 18 months of his tenure as Leader. He survived the second of these by just three votes, cast by long-standing (but now former) members of the principal Opposition Party – the Conservatives. No personal animus there, then . . .

(I do not necessarily support the widely-held view that all three were seduced to the Labour ‘cause’ by promises of significant Chairships, etc, going forward. But be that as it may. It is also been rumoured, by the way, that Councillor BACKHOUSE has recently had an application to rejoin the Conservatives rejected. Be that also as it may).

One of Councillor SIDDONS first manoeuvres on ‘coming to power’ was to rush the ARGOS regeneration project (with its £22 million of borrowing) through a largely-in-the-dark Full Council.

When the ‘Highly Confidental – Top Secret’ ARGOS Report appeared in the Enquirer  (thus delivering – against his will – the Leader’s commitment to “Openness and Transparency”) there was hell on, with Councillors being threatened by the Monitoring Officer with life imprisonment for Misconduct in Public Office.

“The investigation has been reviewed and due to lack of formal evidence, unfortunately we are unable to progress the case further”.

But further example of secrecy now arises. I have now been made privy to a screenshot of an extraordinary MAZARS letter. Readers will recall that MAZARS, the Council’s External Auditor, has been unable to sign off the Council’s accounts since 2015, due to an on-going legal action against the Council, alleging that SBC has unlawfully withheld revenue from Whitby Harbour (berthing, wharfage, parking, etc, amounting to many millions of pounds), in contravention of an extant Article of the Whitby Urban District Council Act 1905.

If my reading of the document is correct – and, by the way, no Councillor outside of the Cabinet (to my knowledge) is yet fully aware of this – then SBC is up the proverbial creek with no paddle: Needless to point out, the MAZARS document does not appear on the Agenda for the meeting of Full Council on Monday 5th July 2021. Nor did it arise at Cabinet on Tuesday 29th June 2021. But my information is that the Council has until Monday 26th July 2021 to progress the matter – which perhaps explains the yesterday morning’s email to all Councillors:

Please note that an Extraordinary Meeting of the Council has been convened for Friday, 23 July at 11am to consider the Council’s Auditors’ Statement on the Whitby Harbour Accounts.

Bearing in mind that the Council brought forward its last meeting to 5th May to evade the legal requirement that, from 7th May 2021, meetings must be held in the Council Chamber, I strongly suspect that an attempt will be made to constrain this Extraordinary Meeting to yet another virtual meeting on Zoom, where the Monitoring Officer can apply the ‘mute’ button to Councillors who ask ‘difficult’ questions (of whom there are few).

What I can confirm is that the Leader and the Directors of Finance and Legal Services have been aware for some months that the Council was under a legalobligation to convene no later than 26th April 2021 a meeting of Full Council to address this matter, subsequently extended to 26th July 2021 in light of the Council’s non-responsiveness – and yet three Councillors I have spoken with confirm that they knew nothing at all of all this until I informed them.

Once again our elected members are being granted the opportunity to comment on a liability potentially running to tens of millions of pounds only at the last possible moment – one working day ahead of the already extended deadline.

Meanwhile, be assured that I will be covering the decades-long (and, in my view, larcenous) exploitation of Whitby Harbour revenues in due course – certainly in time to ensure that all members are fully apprised of the circumstances well before the 26th July Extraordinary Meeting.

So yet again, Councillor SIDDONS’ commitment to “Openness and Transparency” could perhaps be more accurately interpreted as a commitment to “Secrecy and Opacity”. The Whitby Harbour debacle – like the £22 million ARGOS loan – is apparently none of Joe PUBLIC’s business (or even poor Joe’s elected representatives’).

But do not imagine that Councillor SIDDONS has been alone in these 180˚ reversals of his own over-blown rhetoric.

Consider, too, the fact the Councillors RANDERSON and JEFFERSON, on 6th November 2017 – when still in Opposition – strenuously condemned the Council’s determination to intercept electors’ emails to and from Councillors, and to ‘deem’ certain critical members of the public “vexatious”.

Subsequently – i.e. once they attained high office – these Councillors proceeded to vote resoundingly in favour of retaining this egregious, unlawful and thoroughly undemocratic practice:

And yet, as Alderman MURPHY has repeatedly pointed out (and few could know better), these doyens of double-speak are now running the Council – or, as some would have it, running it into the ground. Scorched earth, slash and burn, leaving the Borough like a trashed winter let.

But be of good cheer! Those Councillors who are now contemplating a third Vote of No Confidence in Councillor SIDDONS and his Cabinet need only review the timely reminders in this article to find all the incendiary material they need to ignite their falò delle vanità. Remind me again how a 13-strong Labour Group can be running a 46-strong Council. Time for the other 33 to grow some.