With no further meetings of SBC Full Council scheduled until 11th May 2021, here follows a brief round-up.

Readers who remain supportive of SBC Leader Councillor Steve SIDDONS [Lab.] (and there cannot be many) may be wondering what has happened to the various widely-trumpeted ‘masterplans’ that hit the ground limping after the May 2019 local elections. 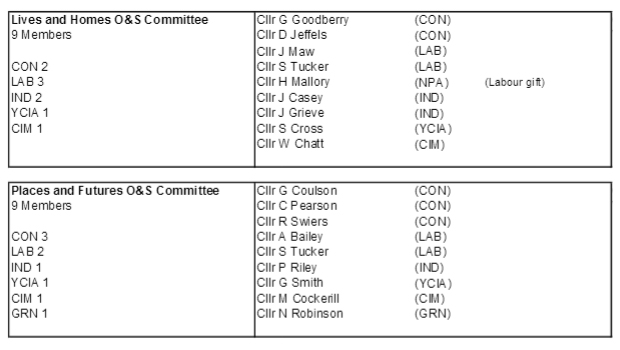 At Full Council on Friday 26th February 2021, despite Labour’s ‘gift’ (and promised Chairship) to Councillor Helen MALLORY [Unaff.] of a seat on the LHOSC, the vote to establish the Chair actually went to that lovable octogenarian, Councillor David JEFFELS [Con.], whereupon Councillor MALLORY (the only other Nominee) flounced out of the Zoom meeting in a virtual huff – outraged, no doubt, at being deprived (by the Conservative Mayor’s casting vote) of her reward for stabbing her former Conservative colleagues in the back.

Coupled with the equally sudden and unannounced departure from the Zoom meeting of the Portfolio Holder for Environment & Sustainability only moments before the scheduled delivery of her Report to Council, one can only speculate about what other promises have failed to materialise.

Nevertheless, the ruling junta will be delighted at having successfully established Committees duly authorised to scrutinise ‘Lives and Homes’ (Big Brother is now ‘openly’ watching us) and ‘Futures and Places’ (he is ‘openly’ watching our kids’ playgrounds, too).

Setting aside (for the moment) the infamous ARGOS regeneration project widely known as “SIDDONS’ FOLLY” – and I will be reporting on a surprising (and very welcome) twist in that unfortunate affair presently – let us now turn to the Leader’s other grand folly; the East/West proposal for local government reorganisation.

Readers may have forgotten (as had I) my article of 6th April 2016, entitled “Greater Yorkshire Devolution – Cui Bono?”. Neasrly five years old, it is well worth revisiting.

The following letter from the CYC head honchos confirms my opinion:

Bear in mind that CYC’s Chief Operating Officer Mr Ian FLOYD is well-place to hold a deeply insightful opinion; he was formerly Nick EDWARDS’ predecessor (and gaffer) as s.151 Officer at SBC, where his spouse is now the Deputy Monitoring Officer.

This topic has been dissected in some detail by the Enquirer’s most popular Guest Author, Alderman Norman MURPHY.

Following the side-lining of Commercial Director Richard “The Brighton Binman” BRADLEY (in consequence of the Travelodge catastrophe) – and his replacement by property whizz Marc COLE – it was interesting to see Mr BRADLEY chuck Assets Manager Bryan WALKER under the bus at last week’s meeting of the Audit Committee (23rd February 2021).

Readers will perhaps recall my article “Travelodge Deal – Solicitor’s Challenge” (22nd October 2020), in which I was able to reproduce a (non-public) solicitor’s letter to the Council highlighting significant changes in the regulation of loans taken out from the Public Works Loans Board (PWLB).

Back in the mists of 4th June 2020, in my article “ARGOS, Lies & Video”, I was able to reproduce a letter to all Councillors from Mr James CORRIGAN which included the following portentous remarks:

The Government has recognised that the mechanism used by Councils to make purchases like the Travelodge acquisition is ill-structured and intends to prevent such profligacy occurring in future.

Returning now to the Audit Committee meeting on 23rd February, poor old Bryan WALKER was pressed by Audit Chair Councillor Andrew BACKHOUSE [Ind.] into uttering some very unfortunate remarks, describing the Travelodge acquisition as “rock solid” and of “cast-iron covenant strength” – at the time – whilst admitting that another CVA (Company Voluntary Arrangement) was well on the cards.

Mr BRADLEY, meanwhile, sat silent as a feather in the wind, effectively disowning the Report to Audit signed off by him, but drafted by Mr WALKER. The salient passage of that Report reads:

The Enquirer highlighted the imprudence of this imminent PWLB car crash – and so did Mr CORRIGAN. For what exactly have we been paying the Binman?

Coincidentally (if you wish), Mr Nick EDWARDS, the Council’s s.151 Officer and Finance Director, has made very few appearances recently. (More on this in due course).

Councillors who have not yet grasped that the Corporate Property Investment Strategy (CSIP) has been an unmitigated disaster need to start reading the Enquirer a little more carefully. They might thus save their own reputations and the ratepayers’ money.

I make an exception for Councillor Guy SMITH [YCIA] who asked the following question at Full Council on 26th February 2021 and now awaits a written response from of the Portfolio Holder for Corporate Resources, Councillor Janet JEFFERSON [Ind.]:

At Audit Committee meeting this week (Item 13 about the Travelodge CVA), it was mentioned that the Travelodge investment was originally considered to be “Rock Solid” and “Cast Iron Covenant Strength”.

Surely a “Rock Solid” or “Cast Iron Covenant” would withstand any economic shock – so was the assessment flawed?

Is this why the Government has changed the PWLB rules to prevent Councils making this mistake and taking excessive risks?

Incidentally, I too await responses from Councillor JEFFERSON, on other important matters – again, to be covered in forthcoming articles.

Termination of the Benchmark Agreement

Beyond directing readers to TIM THORNE’s very interesting piece “Show Me The Money, Nick!” (published on Friday 26th February 2021), I intend to reserve judgement on this topic. Suffice to say that I pointed out in May 2019 that Councillor SIDDONS had made a potentially disastrous error in his maiden speech as Leader.

This indicant of predetermination was compounded by Councillor John ATKINSON [Unaff.] in his widely-circulated email to Mr Roland DUCE (Benchmark supremo) on 6th July 2020:

It has been brought to my attention by the council that Benchmark have been informed that their contract will not be renewed when it comes to an end in December, and therefore I see no reason why any further discussions would be of any value.
Could I ask therefore for you to direct any future communications on this matter to the councils Chief Executive Mr Mike Greene.
Regards,

Though denied by the Council at the time, Councillor ATKINSON’s prophetic remarks turned out to be bang on the money.

Coupled with the financial irregularities revealed in Tim THORNE’s article, it would be reasonable to anticpate legal action and, on that basis, it may be imprudent to comment further at this time. It may already be sub judice.

Readers who have followed our harbours correspondent Allan ROBERTS in his investigation of the misguided intervention (by invitation) of Hemingway Design and the total disregard of harbour-users input will be delighted to learn that it has been confirmed to me, by a reliable source within the Puzzle Palace, that Wayne HEMMINGWAY has been given the royal and ancient order of the boot. Harbour-users will take (cold) comfort in the fact that the ‘masterplan’ is now back in the relatively safe (and clean?) hands of the Portfolio Holder for Corporate Resources, Councillor Janet JEFFERSON [Ind.].

As mentioned above, “JJ” (as she is affectionately known) will be appearing in a forthcoming article on the subject of her apparent breaches of both the Freedom of Information Act 2000 and her own Independent Group’s Constitution.

The Votes of No Confidence

Readers will be aware that Councillor SIDDONS survived the 28th January 2021 No Confidence Vote (his second in a twelve-month) by just three votes, one of which came from the aforementioned Councillor Andrew BACKHOUSE – who must, by now, be sensing the unmistakeable aroma of rat.

The name ‘BACKHOUSE’ – to state the obvious – begins with the letter ‘B’, the second letter of the alphabet. That meant that, had BACKHOUSE supported the No Confidence Vote, it is highly likely that at least two other Councillors further down the alphabetical batting-order would have followed his respected lead – and SIDDONS would have been out on his culo.

Many Councillors had hoped (and expected) that Councillor BACKHOUSE would not only support the No Confidence motion, but also announce his willingness to step up to the plate and accept the Nomination to replace Stevo SIDDONSO (as Alderman MURPHY has dubbed our hapless present Leader).

Many theories have been floated as to why this did not transpire, but the truth, I believe, is simply that neither Councillor BACKHOUSE nor any other prospective candidate (if any) has the slightest wish to be forever tarnished by the above-mentioned aroma of rat – or the sobriquet “The Last Leader of the Most Financially Incompetent Council in Yorkshire”.

Who can blame him?