Regular readers will recall that, in the summer just past, the Enquirer ran a straw poll soliciting public opinion on the follow question:

“Who would you like to see as the NEXT (and LAST) Leader of Scarborough Borough Council?”

The result of a very well-supported poll, which ran from 15th August 2021 to 4th September 2021, produced an unsurprising clear favourite to replace present Leader, Councillor Steve SIDDONS [Lab.] – Councillor Andrew BACKHOUSE, a long-standing Conservative Borough & County Councillor who left the party to join the Independent Group, led by County & Borough Councillor Janet JEFFERSON [Ind.], who has been at the forefront of the heated debate over the desirability of the ‘regeneration’ of the former ARGOS building, despite (or because of) her absence from the Public Meeting held at the Library in Scarborough on Tuesday 19th October.

My first-hand report on the meeting can be read here:

Councillor JEFFERSON, in marked contrast to her pre-eminent position in the fight AGAINST the demolition of the Futurist Theatre, has publically declared her support FOR the ARGOS project on a number of occasions:

In my view, Councillor BACKHOUSE, who, it will be remembered voted AGAINST the demolition of the Futurist, is wise to take this step at this time – and for a number of reasons.

Elections for the new North Yorkshire Unitary Authority are scheduled to take place in May 2022. Sitting Councillors of both SBC and NYCC are already jockeying and lobbying for nomination as candidates for the election.

Many will be mindful of the fact that, following the hugely unpopular Tory-led decision to demolish the Futurist Theatre, Conservative representation at SBC fell from 26 seats to 16. The voting public emphatically took its ‘revenge’ on the ‘guilty’ parties – and can be expected to do so again.

It would be astonishing if the Scarborough electorate would prove any more forgiving of members who support the ARGOS students/nurses dormitory block.

Some Councillors, particularly those tasked with voting at the meeting of the Planning & Development Committee of Thursday 4th November 2021 (when the ARGOS Application will be debated, ‘live’ streamed here), may prefer to maintain a very low profile in the hope of keeping their hands clean on the ARGOS issue. Politically speaking, they would be fools to do otherwise (though no public authority is devoid of fools). Some may conveniently discover that they have a prior but briefly-forgotten dental appointment – or have already committed to a hand-gluing session on the M25, or a court appearance related thereto.

Significantly, Councillor BACKHOUSE’s departure from the Independent Group will not, so he informs me, prevent him from Chairing the forthcoming meeting of the Audit Committee on Thursday 28th October 2021, where a number of interesting matters will be examined. On past form, a surgically precise Public Question from Mr James CORRIGAN could reasonably be anticipated.

Mr CORRIGAN has been instrumental in organising opposition to the ARGOS folly. Like many, he must have been deeply disappointed by the absence of Councillor JEFFERSON from the Public Meeting.

Meanwhile, the beleaguered Councillor JEFFERSON now finds herself confronting a poster campaign throughout Scarborough’s Bottom End calling upon her to convene a much-belated meeting of the Castle Ward Tenants & Resident Association (CWTRA), of which she is Chair, to discuss the vehemently-resisted ARGOS proposal. The reverse of the poster carries a powerful message: 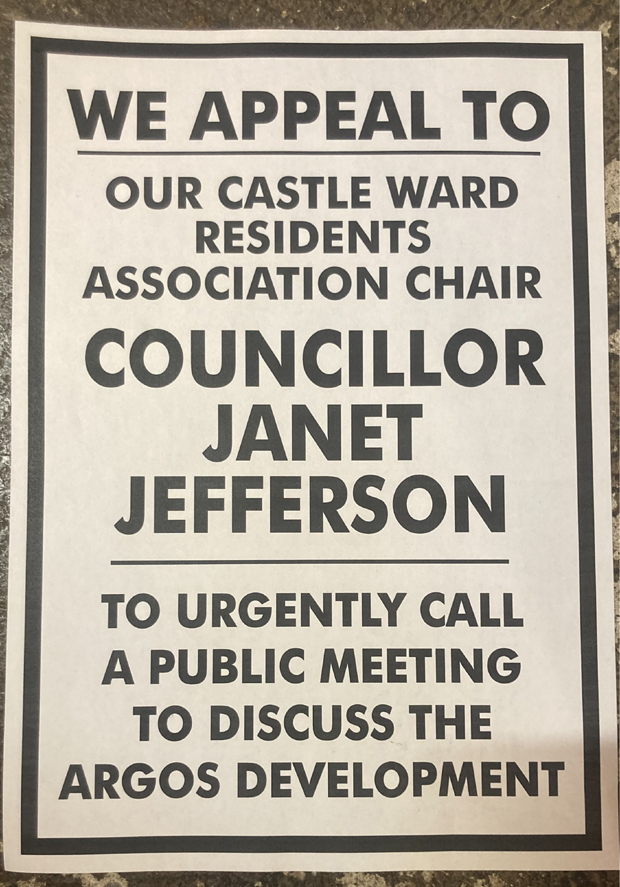 I conclude this report with a screenshot which has been doing the rounds on social media, passed to me by a number of sources within the Council – another powerful message.

This 20th Oct. ’21 report from the Norwich Evening News offers a portend of what the future may hold for the Bottom End if the ARGOS blunder goes ahead: