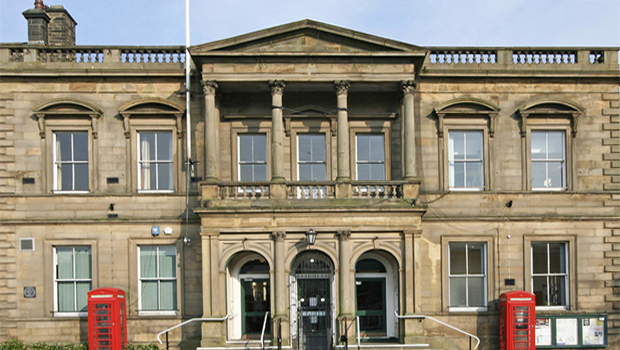 On Christmas Eve 2016, Tom RICHMOND, in the Yorkshire Post, headed up his column with some very pertinent remarks on the subject of Councillors failing to pay their Council Tax in a timely manner while simultaneously receiving substantial Allowances from their respective Councils, far in excess of the Council Tax bills which they had not paid:

“Even though most responsible councils have accepted, in an era of transparency, the need for full disclosure because of the high standards expected of elected representatives, Leeds Council had the arrogance to think it could hoodwink ratepayers and then seek to launch a legal block – paid for with public money – to defy not only The Yorkshire Post but the Information Commissioner, who supported our investigation, also. Worryingly, having spent £1,200 on external legal advice, a further £3,500 of public money was then set aside to ensure the authority could continue to suppress publication of the relevant details. This matters. It is illegal for councillors to take part in spending decisions when they are in council tax arrears. Which strategic decisions, therefore, are now null and void?
We deserve to know.”

We also deserve to know why Council Officers are willing to defy the terms of the Freedom of Information Act to protect Councillors from being exposed for conduct for which the consequences to ordinary members of the public can now include custodial sentences, as the Bradford Telegraph & Argus reveals in an article entitled “Magistrates in Bradford hand out prison sentences to 34 council tax debtors”.

Readers who have followed my series of thirteen articles (unlucky for some) exposing Councillors in the general area of North Yorkshire, Teeside, the East Riding of Yorkshire and Humberside may have noticed the conspicuous absence of revelations at Craven District Council. (URL-links to each of the 13 articles are provided at the foot of this page).

This is because Craven District Council refused my Freedom of Information request of 23rd May 2016, which read:

(2) which CDC Councillors have been barred from participating in voting on budgetary decisions, contingent on Council Tax arrears of two months or more.

My request was acknowledged on that same day by Ms Vicky DAVIES, Committee Administrator.

Authorities are permitted twenty working-days in which to fulfill Freedom of Information requests.

On the fourteenth of those twenty working-days, 7th June 2016, I received a refusal notice from Mr David CARRÉ, CDC’s Revenues and Benefits Manager. 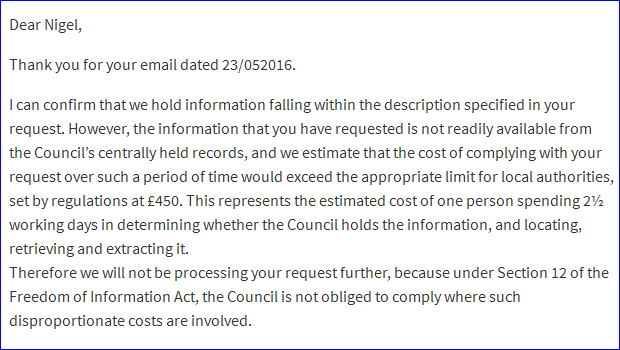 I immediately challenged the Refusal Notice by requesting an Internal Review, on the following grounds: 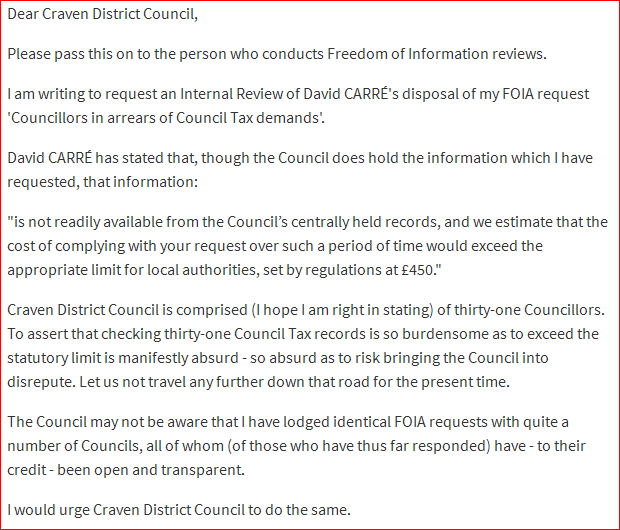 The following day, in order to assist David CARRÉ – or, rather, whoever ultimately would conduct my Internal Review – I followed up my request with a short message drawing attention to three articles in the Huddersfield Examiner:

Mr David CARRÉ – a man, apparently, who does not suffer members of the public (especially those who ask impertinent questions) very gladly at all – responded, on 9th June 2016, thus:

Nevertheless, wishing to comply with Mr CARRÉ’s ‘requirements’, I replied the same day (9th June 2016), reducing the scope of my request: 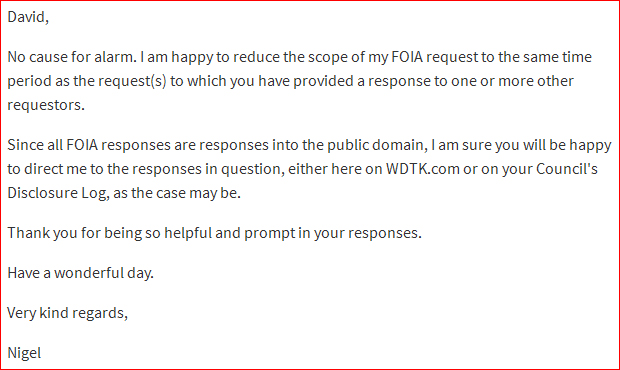 Note the fact that David CARRÉ did not provide, as requested, the URL-links to the other responses to which he had referred. Clearly, there was a determination to protect the reputations of the errant Councillors.

It looked as though Mr CARRÉ was beating a tactical retreat. He could afford to be chummy now, as he passed me back to the redoubtable Ms Vicky DAVIES, who, on 14th June confirmed that my request for Internal Review was being dealt with under terms of the Freedom of Information Act 2000. Pas de merde, Hercules.

But to my surprise, David CARRÉ came back to me later that same day (14th June 2016), in wordy form, the sharp end of which was this: 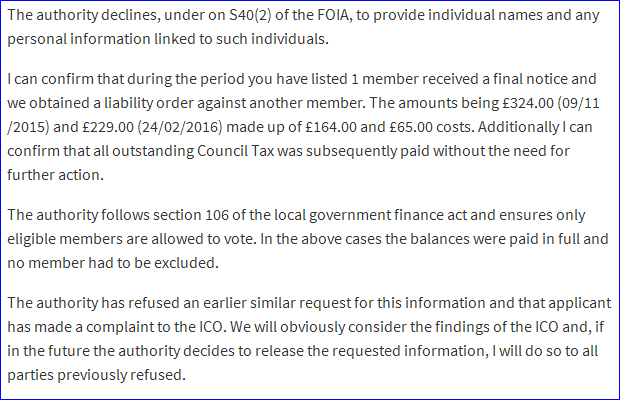 Later that same day (still 14th July 2016), I received the following from Mr David ROPER-NEWMAN, the Information Governance Officer and Community Safety Co-ordinator, who is CDC’s ‘Top Gun’ in the area of stiff-arming nosy citizen-journalists.

I acknowledged David ROPER-NEWMAN’s email on 15th June 2016. To assist him in his management of my Internal Review, I provided him with some case law and legal guidance:

By now, most of the other Councils that I had FOIA’d had already responded, providing names, dates, amounts – all neatly tabulated.

But one does not achieve ‘Top Gun’ status without being an obstinate son of a gun. David ROPER-NEWMAN replied at once:

I responded immediately. I wanted David to be clear about what he was getting himself into.

On 6th July 2016, David ROPER-NEWMAN provided his Decision Notice on my appeal for Internal Review in a seven-page PDF document, the result of which was:

“Taking all the above factors into consideration, I confirm the Council’s revised decision given on 14 June 2016 which provided you with the amounts involved, but declined to identify the particular individuals.”

No dice. Go forth and multiply.

So I decided to wait for the outcome of the ICO complaint – David CARRÉ, remember, had assured me that:

Within an hour or two, I received an email from a member of the public attaching this PDF document (dated 11th November 2016), being a response by David ROPER-NEWMAN to a FOIA request, numbered IR 2016-13.

My original request must have been made slightly earlier, since it was numbered IR 2016-11 so I should by then already have received my own up-date. I had not – already singled out for special attention, it would seem – no doubt because my ability to reach a wide readership.

Here is the important section (the full document can be downloaded here). 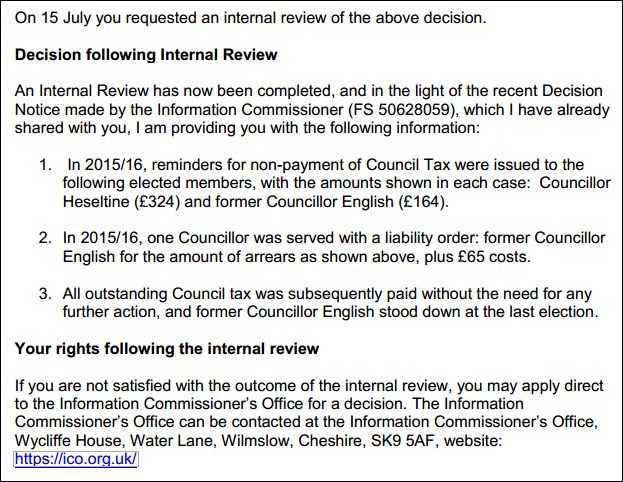 So we now learn that Councillor Robert HESELTINE [Ind.] (who is also an elected member of North Yorkshire County Council, a former Mayor of Skipton Town Council and the Yorks Dales National Park Authority, where he served as Chair – a veritable pillar of society and, in fact, a persistent miscreant) was in receipt of Reminders in 2015/16, as was former Councillor Paul ENGLISH, who was also served with a Liability Order.

Councillor Robert HESELTINE [Ind.] has another claim to fame. He was successfully convicted of a dozen charges of fiddling his expenses over a three year period. The judge said:

That was sixteen years ago and the man is still being elected. And here he is: 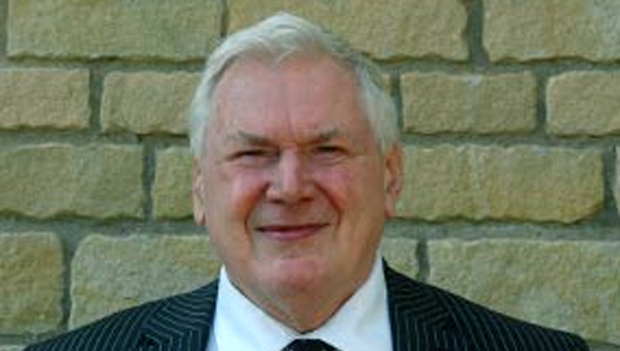 Meanwhile, ‘Top Gun’ Mr David ROPER-NEWMAN has omitted to provide me with his revised Decision Notice – revised, that is, after the Information Commission kicked his proverbial butt.

I have written to David ROPER-NEWMAN requesting him to up-date the public record.

I also requested a recent photograph because I was unable easily to locate one on the world wide web.

However – and quite synchronistically – a reader was able to provide the following snap, downloaded from the public domain: 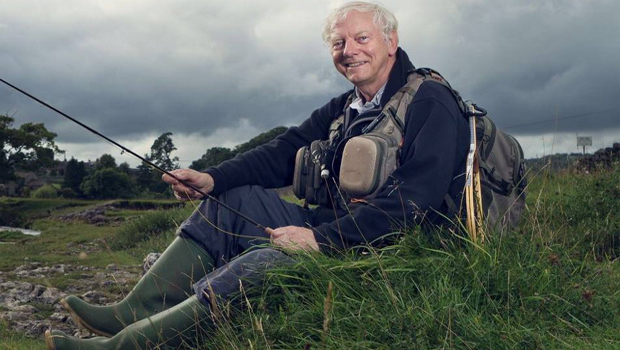 I have yet to receive a response to my email.

Meanwhile, the Yorkshire Post has reported that Leeds City Council has backed away from a legal challenge and diclosed, finally, the names of four Councillors summonsed for non-payment of Council Tax – Councillor Arif HUSSAIN [Lab.], Councillors Paulins and Ron GRAHAME [Lab.], and Councillor Kim GROVES [Lab.].