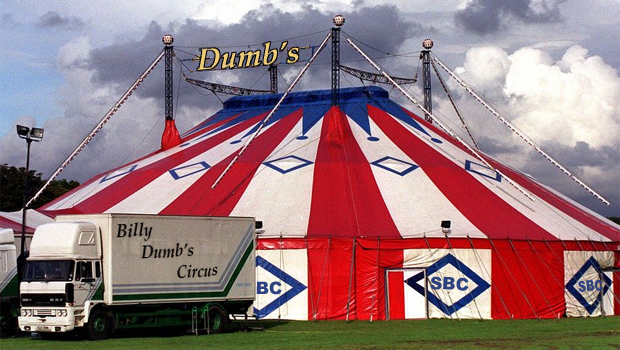 Today’s Guest Author is none other than former SBC Councillor and current voice of the people Stormin’ NORMAN MURPHY, crtiticising the fudged ‘Zoom’ meeting over the ARGOS/TOWN SQUARE madness.

Sadly, as many people have commented, the performance of the current Labour Council leadership seems to be as bad, if not worse, than the previous administration. Indeed, not for nothing has the Ivory Tower on St Nicholas Street frequently been referred to as the “Clown Hall”. That being said, it seems that the leadership situation is showing no signs of improvement and once again Billy Smart’s Circus has rolled into town and two of the Clowns have taken up residence in the Council’s Big Top.

I am of course referring to the recent Overview and Scrutiny debate, the word debate should be read cautiously, into the ongoing saga of how the proposed ARGOS/TOWN SQUARE development should be progressed.

As I think most “reasonable” people would agree, when a Council –  a publicly funded body – proposes to borrow £22 million to build a block of flats for a private company and, “possibly”, create a public amenity, as is the case with the proposed ARGOS/TOWN SQUARE development, elected Councillors need to be fully and comprehensively briefed before they make any decisions.

Indeed, it perhaps goes without saying that because our Councillors will have to decide whether the ARGOS development is a sound and financially viable proposition that they should be given the most detailed and complete information available before they agree, on behalf of the ratepayers, to take on such a huge financial commitment.

Well that, perhaps, is what most “reasonable” people might expect but, as we know to our cost, experience has shown that frequently scrutiny and oversight, “openness and transparency”, are not always in evidence at the Clown Hall.

These unappealing truths were unfortunately demonstrated once again when two of our Officers gave a presentation to the Overview and Scrutiny Committee on 3 June. As anyone who watched the ARGOS presentation given to members of the Committee, by two of the Council’s “finest” Officers will testify, the presentation that members received was a complete and utter shambles.

The presentation was, in fact, a disgraceful example of how incompetent and oblivious to “openness and transparency”, the current administration really is.

The ARGOS project, whether you are in favour of it or not, deserves, indeed, cries out to be given the closest scrutiny the Council and its Officers can devise.

The merits, or otherwise, of a project as costly and complex as the ARGOS/TOWN SQUARE development should NOT, in my view, be presented to elected members, with a view to getting them to agree to giving a developer a £22 million loan, via a dodgy Zoom conference.

A project of the importance and cost of the ARGOS/TOWN SQUARE development, although methinks the Town Square aspect of the development will be quietly dropped, needs to be debated in a face-to-face meeting, with members allowed to ask questions, and hopefully receive detailed and comprehensive answers from Officers.

However, as anyone who viewed the ARGOS Zoom conference will I am sure agree, this joke of a debate did very little to inform or enlighten either Committee members or the public.

Indeed, the way in which this very important proposal was put to members looked more like a classic Town Hall three-ring Circus act, with performances presented by Clowns, in this case Commercial Director Richard Bradley (pictured below) and Project Manager Alex Richards, rather than a serious attempt to give an informed, honest and complete account of how the ARGOS project might be delivered to the benefit of ratepayers.

The way in which this huge and costly development is currently being administered is, in my considered opinion, a disgrace and the whole project should be suspended by the current Labour leadership until the lockdown is removed thus allowing a full and frank debate to take place within the Clown Hall. If this does not happen, I suspect the ARGOS development might well prove to be the undoing of the current Labour administration running Scarborough Council.

As many of you will be aware, the little band of 13 Labour Group members holds control of the Council by means of a very precarious set of coalitions. Labours grip on power is, therefore, in a 46 strong Council, inherently weak and all that might be required for them to lose power is for one Council seat to change hands. So far, in this regard, Labour has been lucky as there have been no by-elections “YET” and consequently the balance of power has remained in their favour.

However, it has now been 13 months since the last elections and there are, as I see it, several potential by-election contenders waiting in the wings. It is highly likely, therefore, that before Christmas there will be at least one by-election, possibly two, and with Labours appalling track record to date hanging over them I don’t see a happy Christmas looming for our “current” hapless Leader.