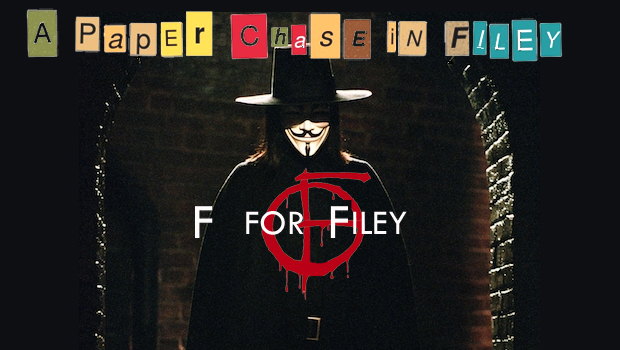 The story went that SBC Leader Cllr Derek BASTIMAN [Con.] was concerned that his ‘independent’ colleague and Portfolio Holder for Major Projects Mike COCKERILL [Ind.Ind.] was far from confident of re-election. Given his record, one can understand his insecurity – especially in the knowledge that Independent Councillors Sam CROSS and Colin HADDINGTON are always well-supported. So strings have apparently been pulled to ensure that any candidate the Conservatives scrape up should not draw too many votes away from COCKERILL. But the TMCA (in whose parliamentary constituency Filey falls) were determined to offer two or even three candidates.

Whilst plausible enough, I filed the story away under “We should be so lucky”.

However – and, as so often, this is  a cracker of a ‘however’ – I am now privy to an extraordinary flurry of emails, beginning with the following gem from Ryedale District and North Yorkshire County Councillor Keane DUNCAN [Con.] to the Tory faithful – at the twelfth hour, so to say: 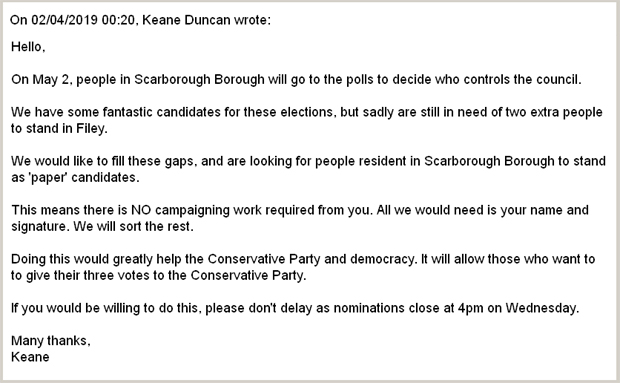 Co-opted Filey Town Councillor Christine RODERICK [Con.] has been trumpeting her intention to stand for a seat at SBC for some time now. If, in response to Councillor Keane DUNCAN’s impassioned plea, Councillor RODERICK is joined on the ballot paper by one or two Tory ‘paper’ candidates, it is more than likely that they will ‘cut one another’s throats’. Metaphorically speaking, of course. (Yawn).

The BASTIMAN version of Conservatism is not overly popular in Filey. Filey Town Council, it will be remembered, voted 12:1 in favour of a Vote of No Confidence in SBC Leader Councillor Derek BASTIMAN and his Tory-dominated Cabinet (plus the outgoing CEO, Mr Jim DILLON). It might even be a case of if BASTIMAN wants COCKERILL, then Filey doesn’t.

Oh, dear. Setting aside the apparent rift between the two neighbouring Conservative Associations, what can readily be discerned from Councillor DUNCAN’s email is that the Ryedale Tories are so absolutely desperate that they are willing to throw any old lunkhead into the fray – which bears out earlier indications already revealed by Tim THORNE and Frank SHEPHERD regarding the poor calibre of Tory candidates in Filey’s neighbouring ward Hunmanby (formerly Hertford).

We could end up with a Tory “whitewash” in the southern part of the Borough – in a very different sense to the one intended by HHJ Humphrey FORREST when he blasted SBC for it’s utterly inept (deliberately inept?) investigation of the Ben MARRIOTT corruption allegations as a “complete whitewash”. The generalissima of the SWCA must be spitting feathers. 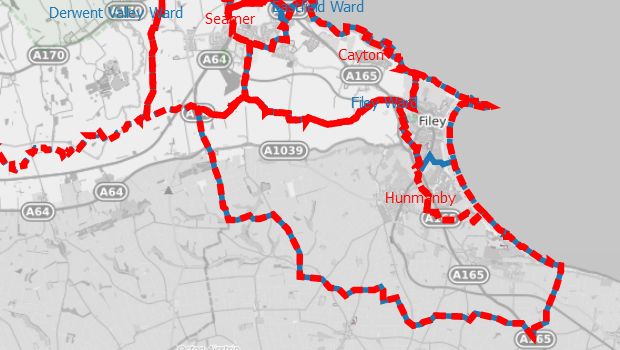