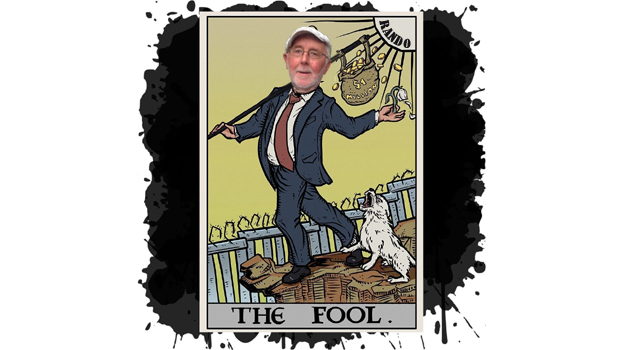 Guest Author (and former SBC Councillor) Stormin’ NORMAN MURPHY is less than impressed with Officer/Member communications at SBC – otherwise known as “the tail wagging the dog” (facilitated, always, by the gullibility/stupidity of the dog).

I don’t think it would be an exaggeration to say that, since coming to office in May 2019, the Premiership of Labour leader, ‘comrade’ Steve (the Scarlet Pimpernel) Siddons, has not been a happy experience for anyone, except that is, for, perhaps, the Pimpernel himself. The generous remuneration he receives for leading the Council, for example, no doubt considerably eased the financial burden that his many holidays abroad might otherwise have caused him.

However, looked at from the ratepayers’ perspective the Premiership of ‘comrade’ Siddons has not, I would venture to say, been quite so enjoyable. His opening promise that his administration would be “open and transparent” has proved to be about as truthful as the old saying “the cheque’s in the post”. Premier Siddons’ politburo, is, in fact, so secretive that we would almost certainly have had a better chance of getting information out of the Kremlin at the height of the Cold War than we currently have of getting anything out of the Pimpernel’s Clown Hall.

The Pimpernel’s promises to resolve the issue of Benchmark’s failure to develop any of the North Bay sites they currently seem to have in their grasp, Kinderland, Mr Marvel’s and the Atlantis pool site, has come, predictably, to nothing. All three sites remain derelict eyesores and the prospect of any of them being developed, or the promised multiplex cinema being built, looks less and less likely as each day passes with the Pimpernel still in power.

The Pimpernel’s reckless borrowing of £22 million to develop the Argos site and then, laughably, build student flats for Coventry University, will no doubt go down in Scarborough history. This ludicrous project will forever haunt the Pimpernel, and his Labour-led administration, as surely as the demolition of the Futurist Theatre will forever haunt the previous Conservative leader of the Council.

Nor can we ignore the smaller, but no less important, promises made by the Pimpernel to ratepayers. We were promised a resolution to the ongoing problem of the whole Borough’s lack of decent public conveniences. On the Marine Drive in Scarborough we were assured that the toilet block demolished by the previous administration would be replaced.

A temporary toilet block, we were assured, would quickly be replaced by a more permanent structure. The temporary toilet was, in fact, installed at a cost to ratepayers of over £50,000. However, it was only in place for about four months, and then was removed never to be seen again. Leaving us now in the unenviable position of not having a pot for our residents and visitors to piss in. Which, not unsurprisingly, has resulted in human waste being liberally distributed all around the town.

The Pimpernel’s reign has, in fact, so far, been nothing short of an unmitigated disaster, punctuated by bouts of total incompetence, waste, deceit and dither. However, it seems that now we can add fiasco and farce to his ever growing list of failings.

I am of course referring to his Cabinet colleague’s remarks concerning the £3 million pound loan to Cornwall Council. When Cllr Tony Randerson (Labour), one of the Pimpernel’s chief lieutenants and Cabinet member for Legal affairs was asked by a ratepayer why Scarborough Council had loaned Cornwall Council £3 million, Randerson’s initial response was “we haven’t loaned anything to Cornwall or any other local authority!”

Our Tony then went on to ridicule the evidence and advised the ratepayer that she should not “believe or trust for one minute much of the crap printed in the national papers”. The inference being that the information the ratepayer was relaying to the mighty Tony, that SBC had loaned £3 million quid to another Council, was, in fact, fake news, and should therefore not be trusted or accepted.

Well, Tony, so far so good!

As might be expected, it was not very long before a concerned Councillor contacted Nick Edwards, the Council’s Director of Finance, and asked him if the story of the £3 million loan was true. And, surprise surprise, this is what our Nick sent him back:

“Turning now to the specifics of the transaction detailed within the article. This Council invested £3 million with Cornwall County Council on a short term basis; from 19 June 2019 until 19 July 2019”.

Me thinks the mighty Tony should take some of his own advice and not “believe or trust for one minute much of the crap”, that he and his glorious leader spout on a daily basis.

The present Labour administration, headed by Pimpernel Siddons, currently, laughably, attempting to rule the Borough of Scarborough, is not only incompetent, wasteful, boastful and devious it is now, by its own admission, officially “IDIOTIC”.