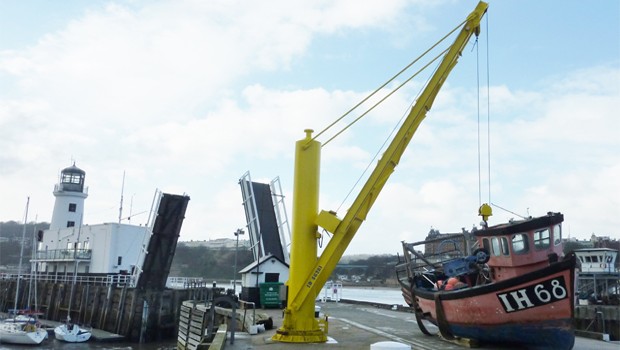 A Letter to the Editor from Allan ROBERTS, pointing out another profligate mis-use of public funds on the watch of Scarborough Borough Council Portfolio Holder for Harbours & Lands, Councillor Mike COCKERILL – the man who thinks he can double the size of Scarborough Harbour.

On 4th March 2016 the ill-fated crane on Vincent Pier once again fails to live up to expectations, when it failed dismally to lift Scarborough fisherman Alan ‘Biff’ Plummer’s new vessel into the harbour at Scarborough, leaving the vessel high and dry on the pier top.

The Vincent Pier Crane has had a history of bad design and unreliability since it was installed in 2005. Perhaps the most embarrassing incident, after installation, being the realization by the Council that they had merely specified to the manufacturers that crane should be capable of lifting 4tonne, but had neglected to specify that the crane have an effective slewing mechanism, without which it is useless for its perceived task of lifting vessels into and out of the harbour. This SBC error required the removal and return of the crane to the manufactures for modification.

Freedom of Information requests made to Scarborough Borough Council covering the cost, maintenance, and income generated by the crane since its installation on May 2005 until 31st March 2015, and are set out below.

The FOI response reveals that in 2014 the Council were charged £1,000 to hire a crane to provide service for just one day.

Assuming a 6 hour day, that charge equates to £183 per hour.

The current charge for the Vincent Pier crane is £19.11 per half hour, and includes the certified SBC operator.

It is apparent from the information supplied by SBC that the charges for usage of the Vincent Pier Crane over the 10 years since installation, do not cover even one quarter of the maintenance costs of that equipment.

Which leads me to ask, are SBC giving ‘Best Value’ to the Council taxpayer by subsidising this service?

In the image attached is the Vincent Pier Crane and in the background, to add even more embarrassment to the Council, can be seen the Lighthouse Island Bridge which has also given up the ghost, having been jammed in the open position for 3 days now.