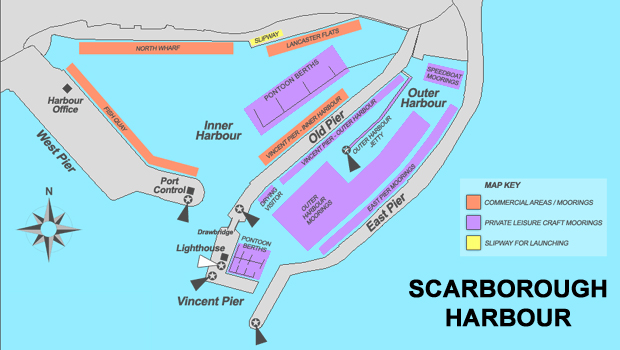 Harbours correspondent ALLAN ROBERTS brings some much-needed clarity to the lack of consultation over the management of Scarborough Harbour.

Scarborough Harbour Representation and its faults

Having witnessed the Deputy Harbour Masters comment to the effect that he does not know the reason why there is no dialogue between Harbour Users and the SBC Harbours Dept., and why SBC took the decision to ’step away’ from that group, perhaps a little history of the Group may help him.

Scarborough Harbour Users Group (SHUG) was formed around 2001, at the time when the Cabinet system of governance was adopted by Scarborough Borough Council, and since that time SHUG held regular quarterly meetings with Harbour officials for many years.

At Whitby, there was an identically constituted Harbour Users Group – WHUG.

In 2011, Scarborough Council took the decision to form the ‘pilot’ Whitby Harbour Board, which if successful would be adopted at Scarborough Harbour also.

In order to comply with Governmental directives to Councils to divest themselves of their interests in Harbours,  SBC formed the Whitby Harbour Board and chose simultaneously to establish an official Consultative Group, with its own Terms of Reference (ToR).

Consequently, on 3rd Oct 2011, the Borough Harbourmaster, Mr Ian Vasey, presented Whitby Harbour Board with a Terms of Reference document.

Here is the Risk Matrix that accompanied that report.

A similar Report was presented to Whitby Harbour Users Group on October 11th 2011.

Here is the Risk Matrix that accompanied that report.

If they would not accept the ToR, then, as the Risk Matrix states, “Whitby Harbour Consultative Group will return to Whitby Harbour Group status and operation”.

There would be no disadvantage (or advantage) to the Harbour Users Group, as no matter what title it bore, it would remain, as always, merely an advisory group with no authority or powers (other than a longer title!).

However, if the Whitby Harbour Users Group rejected the ToR, that would mean that Whitby Harbour Board, lacking a consultative group, would be left outside of the Governmental guidance, before it even got off the ground, causing SBC some embarrassment, one would imagine.

Well, for a short while…

In 2013, SBC Finance Director Nick Edwards took over the senior management of the Borough Harbours.

On 20th March 2013, at his first meeting with the Scarborough Harbour Users Group, he told members that:

The Terms of Reference were subsequently brought to the table by Nick Edwards at every meeting after he was given the responsibilities for the running of the Harbours, and on each occasion Harbour Users have taken the view that the ToR were – and are – unnecessary for meetings restricted to a duration of just 1 hour, on 4 occasions a year.

The timing of the meetings was determined, by Nick Edwards, to be held at 4:00pm on a working day, which meant that some members of the Group were having to take time off from their work, whereas the Whitby Group meetings, according to their ToR, were held at 6:00pm.

Mr Parker had been a very capable Chairman, since 7th June 2011 until the very last meeting of the Group, on July 15th 2015, when he stood down after being told by Nick Edwards that the ToR precluded him from that role at future meetings.

This is the relevant extract from the Whitby Group, quoted by Mr Edwards:

4.1  Chair to be elected from independent Members of Group

4.2  Chair to be elected at the first meeting of the year

4.3  Position to be held for one year (typically 4 meetings)

4.4  Maximum tenure of 2 years with re-election not permitted for 2 years

As result of Nick Edwards insistence that the Users Group should abide by a set of rules (which the Group had never agreed to or adopted!), the last meeting of the group took place on 15th July 2015.

It is rather ironical that, in the minutes of that same meeting, Capt Vasey, the Borough Harbour Master, is recorded as stating:

“IV said he felt that the relationship had improved considerably between users and the Authority.”

This is the statement issued to the Harbour Users Group representatives by SBC, dated 8th October 2015.

Please note the Scarborough Harbour Operational Consultative Group meeting provisionally arranged for 3.30pm on the 14 October 2015 has been cancelled until further notice.

As discussed at the previous meeting, it was considered that the Terms of Reference should be agreed, with the delegated Chairman in place prior to the next meeting. As the group does not currently have an elected Chairman and consequently no agreed Terms of Reference, this meeting is unable to proceed.

Please do not hesitate to contact me if I can be of any further assistance.

Here is an extract from the Report presented to the Whitby Harbour Users Group, when their ToR proposals were being discussed in 2010 (my emphasis in bold type):

“At present the Chairperson of the Users Group is the Harbour Master and secretariat support is provided by the Council.

It is suggested that the role of Chairperson, subject to agreement by the Group, be relinquished by the Harbour Master and that the Group elect a Chairperson and Vice Chairperson from their ranks to represent them.“

The fact is that Scarborough Harbour Users have not accepted those ToR, nor have they agreed to elect a Chairman; nor are they in any way obliged to do so.

Until such time as a Chair is elected, I suggest the then status quo has continued to exist, and that the Harbour Master should and could have chaired the meetings.

These are not meetings of the United Nations, for goodness sake. If SBC is serious in its desire for openness, transparency and consultations with stakeholders, then that is not apparent in its behaviour.