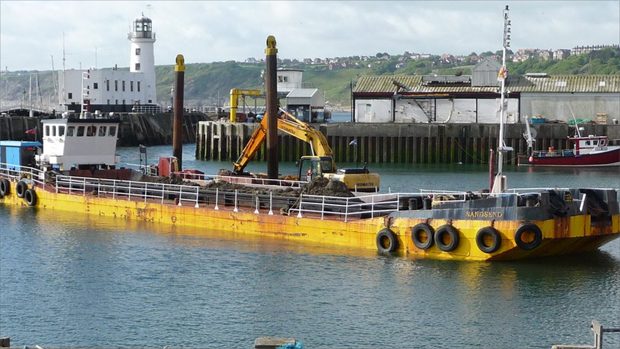 In 2014, a Report entitled ‘Scarborough Borough Dredging System Overview’ and authored by the Borough Harbour Master Capt Ian Vasey, was presented to the now-defunct Whitby Harbour Board.

The Dredging Report identified the total operational costs of the Dredger ‘Sandsend‘ to be £180,000 per year for both Whitby and Scarborough, and breaks down those costs in terms of the following categories:

The Report also indicates that the Dredger generates a profit from outside contracts worth £60,000 per year.

The Report states that the figures quoted above are based on the average expenditure and income over the three previous years, and recommended an upgrade of the Dredger, at a cost of £400,000.

On the basis of that Report,the Council decided that the Borough Dredger would undertake a major re-fit at a cost of £402,000, subsequently resuming dredging activities in 2017.

I requested that SBC should provide their response using the same breakdown/format as that used by the Harbour Master in the projections contained within his 2014 Report.

In addition, my request made just one extra query, which was to identify how much of the overall £180,000 expenditure was charged to Scarborough Harbour, as opposed to the 2014 report which bundled the charges for both ports as a combined amount of £180,000.

When I received a response from SBC, I was informed that details of income from ‘outside’ contracts had been withheld on the grounds of commercial confidentiality.

In fact,  although the Harbour Masters report stated that profits from outside contracts were projected to be worth £60,000 per year, the only reference to be seen in the Dredging records covering the 2 years specified in the FOI request, are just 8 days in the first quarter of 2018. Whether or not that contract generated the expected amount only the Council know . . .

I was also informed that Insurance Expenditure was withheld on grounds of ‘commercial sensitivity’.

This surprised me, as the SBC had already quoted figures for Insurance Expenditure in their projections of 2014, thus setting the precedent. Perhaps the refusal of SBC to disclose Insurance Expenditure was possibly due to a substantial hike in premiums following the incident in 2017, when the Dredger was in a collision with a luxury cruiser.

The subsequent claim against the Council is rumoured to be into 6 figures.

Below is the information provided by SBC:

As for the projected earnings from outside contracts projected to be worth £60,000 per year; the only reference to be seen in the Dredging records of the 2 years specified in my FOI request is just 8 days in the first quarter of 2018. Whether or not that contract generated the expected amount, SBC refuses to say.

I find it hard to believe that the report was written by the Harbour Master, who had himself spent several years in command of the Dredger ‘Sandsend‘, thus having an intimate knowledge of its workings, etc, and yet his Report could have been the work of either of the Brothers Grimm.

The refusal of SBC to provide full expenditure and income data make it impossible to make a like-for-like comparison between the projected figures of 2014, and the true figures of 2017/19.

However, and in the interests of openness and transparency, I am left with little choice but to use the information contained within the Borough Dredging System Overview Report 2014, as that is the most recent complete Report to show ALL expenditure.

Together with the Harbourmaster’s quarterly Dredging Reports, I believe that there is evidence that the Borough’s dredging system is badly and unfairly managed, with Scarborough Harbour users being severely disadvantaged.

We are told by the Harbour Master that the operational costs of the Borough Dredger are £180,000 per annum.

Below, on lines 1 to 6 are the details of days worked, tonnage loads etc, together with the dredging costs. That data is taken from the Borough Dredging Reports.

Lines 7 to 10 are a breakdown of those costs, per Port, per Day, per Load and per tonne, and which show a disproportionate methodology of charges, between Scarborough and Whitby Harbours.

In April 2009, the schedule of fees and charges at both Scarborough and Whitby Harbours was subject to a comprehensive review. This was undertaken with the aim of achieving parity of charges for similar services, to try and align, as far as was appropriate and reasonably practicable, the charges at both ports.

In December 2009, a report to the Cabinet, written by SBC Project Manager Alex Richards, clearly states:

Council Cockerill then went on to state that Scarborough Harbour paid a fixed cost for dredging services regardless of any downtime, though he did not mention what that charge was. (No wonder).

It is apparent then, that the Council regard the Dredger as a shared asset.

While acknowledging that a Dredger is vital to the smooth operations of Whitby Harbour, the fact is that Whitby enjoys a first-class service at rock bottom-cost.

Because of the unfair and insidious charge of a Council-owned asset, between 2017-19 Scarborough Harbour in fact paid £76,000 for just 9 days of dredging, which equates to £8,450 per day.

Given that Bridlington Harbour Commissioners now own a modern Dredger, and Bridlington is as conveniently located in relation to Scarborough as Whitby is, the questions that need addressing are:

Over to you, Councillor Diligent.