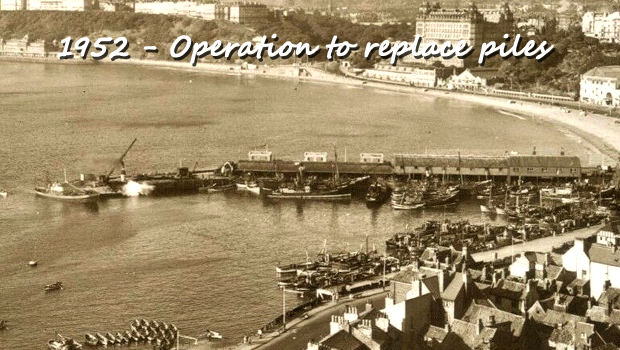 North Yorks Enquirer Harbours correspondent ALLAN ROBERTS writes with an update to his article of last week – “A Bad Case of Piles?”  (which went down very well – but not in the CEO’s office!).

For those readers who are interested in my recent article regarding the Scarborough West Pier Regeneration plan, here is a little update . . .

Since the publication of that article, I am now reliably informed that, at a meeting of the Harbour Users’ Group on 9th November 2022, it was disclosed that to renew the sheet piling, rather than patch it, would have cost only a measly £15k more.

How disappointing, then, to find that the Application/Report to which Harbours Supremo Nick Edwards (our new CEO) puts his name, does not offer, or even mention, that option.

His report does state that the costings include a contingency and inflation allowance of £320k (circa 30%) of which, I suggest, a relatively small portion could better be utilised by renewing the piling, rather than patching.

The Report states that patch repairs have previously been carried out and, I suggest, that that will be the ongoing strategy for dealing with the problem – rather like continually inflating a slow puncture in a car tyre, rather than replacing that tyre as a more permanent solution, probably cheaper in the long term.

If this latest proposal is pushed through, then the  Council taxpayer will be saddled with a bill of £1.35m to fund this work, in addition to the already committed sum of £6.4m, simply because to make a funding application to the government department (MMO), may take up to 6 months (i.e. too long).

I understand that the proposal will also have to achieve s.24 approval from NYCC – a process described by Cllr Jefferson as ‘unfortunate’ – which indicates that this Application/Report may well be nodded through, at least as far as SBC are concerned.

I do hope that someone at NYCC will wake up to the fact that this proposal is being bulldozed through by the acting CEO of Scarborough Council, Nick Edwards, for no other reason than to meet the deadline for the highly unpopular West Pier Regeneration Plan.

I understand that Cllr Derek Bastiman is to be offered the Portfolio for Harbours in the forthcoming North Yorksire Council. Perhaps it is time for him to step up and make his views known, too.