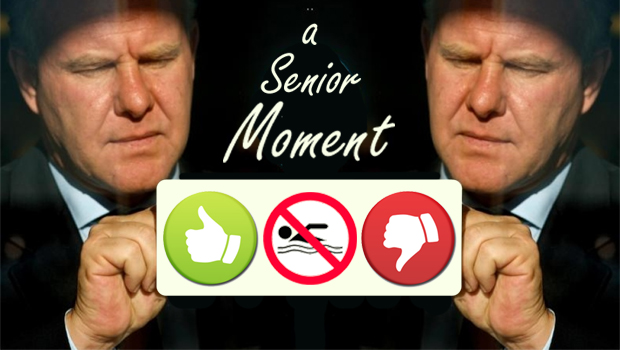 In response to the latest in a series of articles on the Enquirer concerning Bathing Water Quality in Scarborough’s South Bay, one Facebook user (clearly a wag) posted the following rhetorical question:

This prompted our Harbours and Maritime Affairs Correspondent ALLAN ROBERTS to the opinion that perhaps a more relevant organization to ask for comments would be the RNLI. Here follows Allan’s rationale.

The RNLI is contracted by SBC to provide Lifeguards for the Boroughs beaches, for which it is paid around £160,000 per annum.

The Lifeguards are RNLI employees and, I suggest, any occupation which involves entering the sea on a daily basis, and against the advice of the Environment Agency, may be subject to Health and Safety scrutiny?

Perhaps sight of the Risk Assessment carried out by the RNLI may be more relevant, particularly at Scarborough?

The Operations Manager at Scarborough RNLI is John Senior MBE TD, who is also Chairman of the South Bay Traders Association (SBTA) and, more importantly, also a leading member of the Yorkshire Bathing Water Partnership (YBWP).

The YBWP is also informed by other stakeholders, including Scarborough’s South Bay Traders’ Association.

Who better to comment, then, than SBTA Chair and Spokesperson, John Senior MBE TD?

Does the departure of John Senior suggest, perhaps, that he is uneasy about the inherent conflict of interests contingent upon his commitment to both sides of the same coin when it comes to the matter of Bathing Water Quality in Scarborough’s South Bay?

As a member of the Yorkshire Bathing Water Partnership (YBWP), he is aware of the POOR Bathing Water Quality rating of Scarborough South Bay.

But, as member of the Scarborough’s South Bay Traders’ Association (SBTA), surely he is also under pressure from his fellow SBTA members to avoid alarming the public – Amity Island style? These members stand to suffer a dramatic downturn in business if a permanent bathing prohibition becomes unavoidable.

As Operations Manager of RNLI Scarborough, John Senior will be aware that Health & Safety issues have been raised. Has that fact influenced his decision to step down?

Does the RNLI, as SBC’s presently contracted Lifeguard provider, recognise POOR BWQ as a Health & Safety risk in its employer/employee contract? Does SBC – or its agent , the RNLI – need to consider the possibility of a legal requirement to indemnify itself through appropriate Insurance cover?

If public beach safety is paramount, surely beach Lifeguards should be actively pointing out the advice of the EA – “ADVICE AGAINST BATHING” – rather than merely recommending bathers to “Always swim between the red and yellow flags”, as at present?

Curiously, the RNLI logo appears on each of these conflicting recommendations . . . 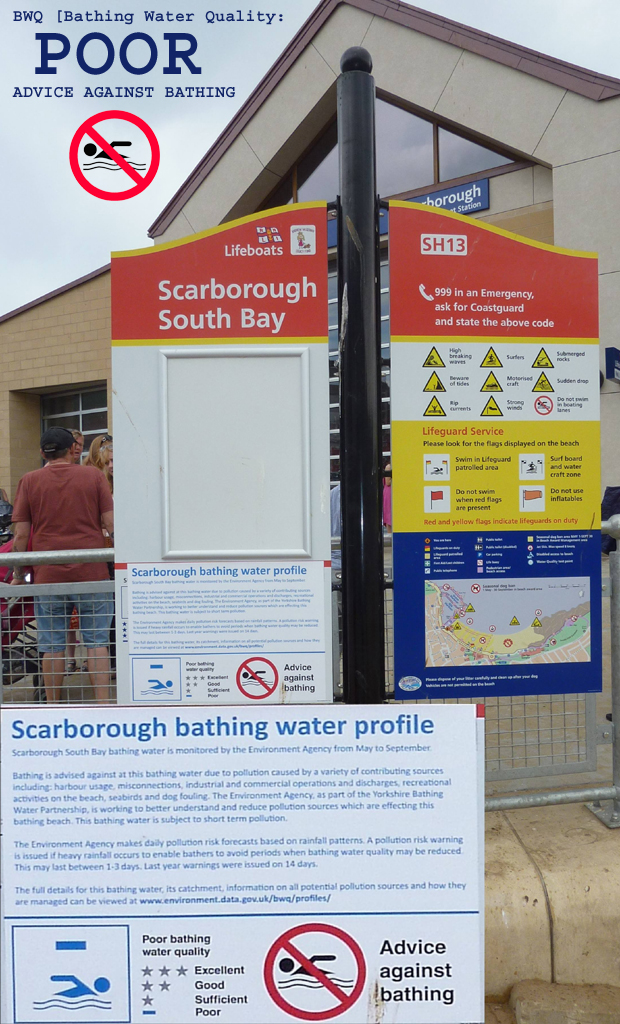 Why is the tourism industry, through its public representatives (in particular Welcome to Yorkshire), burying its head in the sand?

Reviewing the web-cast of the Scarborough Borough Council meeting of 3rd July 2017, one encounters, at about at 1h:20m-1h:21m, Councillor Cockerill, Portfolio Holder for Project Leadership, Harbours, Coast & Flood Protection, intoning the words below (my highlighting, in bold):

“Following receipt of the question Mr Dillon arranged for one of my officers to speak to the lifeboat station management and brought the letter to their attention. We generally agree that it is a good point regarding the RNLI running courses where participants enter the sea in the South Bay where the current advice is against bathing. It is fair to say that the RNLI did not appear to have considered Bathing Water Quality in their risk register when running these courses.”

“It is fair to say that the RNLI did not appear to have considered Bathing Water Quality in their risk register when running these courses.”

The Minutes of the meeting are available here.

In regard to specific bullet points raised in the letter:

Yes. The Borough Council has three signs within the Bay at beach access points clearly showing information on the bathing water quality classification and which display the advice against bathing symbol. Information is also available on websites such as the Environment Agency and the Marine Conservation Society’s Good Beach Guide.

[Ed: Two of those signs are mutually contradictory]

The Borough Council does not as these courses are offered by the RNLI. I am not able to answer if insurance companies are aware of BWQ in the South Bay.

It is gratifying to know that the Council works closely with the Environment Agency and the Yorkshire Bathing Water Partnership, as well as the RNLI.

What remains to be discovered is the precise nature of this work upon which SBC, the EA and the YBWP are working so closely and – more to the point – what fruit has this intensive collaboration brought forth? The answer would appear to be . . . decline.

The Wikipedia entry for Scarborough, North Yorkshire tells us that Scarborough is:

Historically, Scarborough South Bay has been the most popular and well-serviced beach on the North Sea coast.

Yet the vaunted “close” collaboration between SBC, the EA and the YBWP appears to have achieved nothing tangible whatsoever. In fact, Scarborough has been left behind, as compared with the steady (and laudable) improvement in BWQ over the past decade at every other resort on this coastline.

Worse, it has now reached the point at which the contracted Lifeguard provision of the RNLI may well be withdrawn, leaving bathers to run the gauntlet of Intestinal Enterococci (IE) and Eschericcia Coli (EC) – and the Council to face the prospect of defending actions for breach of duty of care.

It is difficult to imagine Councillor Cockerill (or Sir Gary Verity) facing the television cameras of Calendar or Look North next spring to explain why the BWQ remains POOR (and apparently deteriorating); that there is to be no Lifeguard provision and that the South Bay beach has had to be fenced off – out of bounds.

A sad prospect indeed for what historically has always been the premier seaside resort on this side of the country.

By stepping away from his position as Operations Manager at Scarborough RNLI, John Senior – a staunch Conservative – may prudently have evaded any forthcoming dispute over the £160,000 per annum Lifeguard provision contract between it and SBC, but surely he must now consider his position as a member of the Yorkshire Bathing Water Partnership, whose performance thus far sets it at odds with the interests of the Scarborough South Bay Traders’ Association, whose members are fundamentally reliant upon a speedy return of Scarborough to its customary pre-eminence amongst the seaside resorts of the east coast of England?

As one Facebook-user remarked, a moratorium on the use of the Wheatcroft Long Sea Outfall for three months could go a long way to identifying it (or eliminating it) as the source of the bacterial pollution.

A decisive outcome could point the way to a desperately-needed EXCELLENT BWQ rating for Scarborough South Bay which the YBWP, including Yorkshire Water, has failed to deliver.