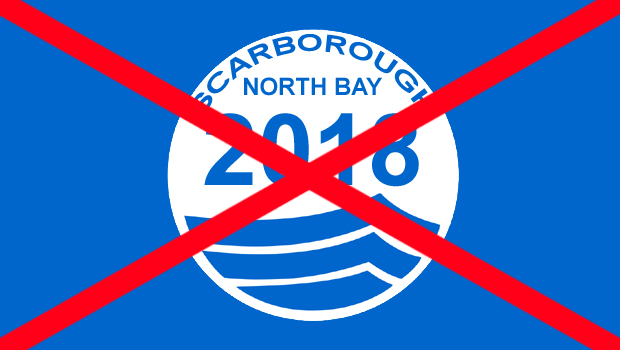 Guest Author BOB ROBERTS breaks some more bad news for Scarborough businesses.
~~~~~
Last week saw the announcement of a Bathing Water Quality (BWQ) rating of ‘Poor’ for Scarborough’s South Bay.
Meanwhile, North Bay will next week be announced as having fallen from ‘Excellent’ to ‘Good’, thereby losing its coveted ‘Blue Flag’ status, which it has enjoyed during what, for many years, were pristine waters.
I think for 20 years now – at least since the inception of the ‘Blue Flag’ Awards (the same number of years that South Bay has consistently NEVER been awarded a ‘Blue Flag’), North Bay has flown the ‘Blue Flag’ for Scarborough.
From 2018, all that will be history.
Interestingly, one of the factors that will prevent the South Bay from EVER being awarded a ‘Blue Flag’ is that industrial discharges in some measure do affect the beach area.
Yorkshire Water, unopposed by even SBC and/or the much-pleaded Yorkshire Bathing Water Partnership, have demonstrated a significant oversight in regard to the criteria.
Consequently, even IF the Wheatcroft Long Sea Outfall (“the pipeline”), considered by anyone capable of rational thought to be the prime cause of the pollution issues in the South Bay, discharged Evian spring water (an “industrial discharge”), the ‘Blue Flag’ status would, by definition, be unachievable.
In addition to this, one of the criteria for being able to achieve the ‘Blue Flag’ Award is that the BWQ MUST be ‘Excellent’. This has not been the case in South Bay and, as of now, the North Bay fails to qualify.
There are also other stipulations, being as follows, taken from the ‘Blue Flag’ website

So in the next few days we will see a further announcement with regard to the North Bay, since its Bathing Water Quality (BWQ) has been downgraded from ‘Excellent’ to ‘Good’ – which simply is not good enough for a ‘Blue Flag’.
As such, IF SBC were to apply for ‘Blue Flag’ status for North Bay, then sadly it cannot qualify.

According to Keep Britain Tidy (administrator of the ‘Blue Flag’ Award in England), there are 33 different criteria for a beach to qualify for the Award. North Bay now fails on water quality, but also quite probably on “sewage-related discharges” and, IF evidence is found of effluent from the Wheatcroft LSO, then it also must fail on the “industrial discharge” criterion.

Effluent entering South Bay from the south has only to round the Castle headland for the North Bay to become contaminated.
Despite the millions of pounds that Yorkshire Water has poured into the “improvements” of our inshore waters, it would now appear that little to no improvement has been achieved and, in fact, in the case of the North Bay, the situation may actually have been made worse.
It could be asked:

What has changed is that the “pipeline” taking effluent from Wheatcroft Long Sea Outfall (LSO) out to sea, after some 18 months of discharge, has now (perhaps inevitably) started to influence BWQ in the adjacent bay.

Surely, it is now time to question the competency of Yorkshire Water in their management of Bathing Water Quality in Yorkshire – in fact, to not confine questions to competency but to ethics, too, since (according to the Environment Agency), Yorkshire Water, when discharging the thousands of tonnes of effluent daily, undertake absolutely NO FILTRATION of the effluent following its receipt from the McCains plant – nor do they monitor on a continuous basis.
This is shameful, to say the least, and it is apparently carried out with the blessing of the Yorkshire Bathing Water Partnership (YBWP), who, since its inception, has failed effectively to challenge this practice.
Surely, it is now time for SBC and the South Bay Traders’ Association (whose membership includes a number of fabulously wealthy pillars of the community) to ignore fantasies being bandied about regarding dogs and seagulls – and consider their position with regard to Yorkshire Water from a litigation perspective.
For Scarborough’s sake, it is certainly time for somebody to do something.