The official transcript of Councillor COCKERILL’s verbal Report to Council on Monday 8th January 2018 is reproduced, below. Let us allow it to speak for itself. Thereafter, I propose to raise a question. Just one question. For now.

Thank you for the prior notice of your question. Whilst it specifically refers to the South Bay, my replies cover all of the designated bathing beaches along the whole of our coastline.

I will, once again, state that it is the Environment Agency which is the regulatory authority for BATHING WATER QUALITY.

Yorkshire Water and the Environment Agency both have their respective and important roles and responsibilities but the greatest impact of less than EXCELLENT Bathing Water, as targeted by Yorkshire Water with its major investment programme, is on the tourism and business sectors.

As you are all aware, Yorkshire Water and the Environment Agency carried out a major DNA sampling programme of bathing water within the South Bay and Wheatcroft area of Scarborough in late summer of 2016. You have all received copies of the detailed technical report together with the Executive Summary.

The findings of the report are guiding further work towards identifying possible sources and locations where different types of pollution start to be problematic. As was always stressed, we did not believe the report would, alone, provide all the answers to be able to solve the problem.

Some colleagues will have seen the article on BBC Look North last Wednesday when representatives from the Environmental Agency and Yorkshire Water were interviewed.

At this point I would state that I was not approached to participate, probably as the BBC understands, it is those interviewed that have the direct responsibility for Bathing Water Quality.

I am indebted to The Chief Executive together with the Leader and Deputy Leader who met with the Chief Executive of Yorkshire Water as recently as last week, this was the annual liaison meeting and discussion mainly focussed on the revised Bathing Water Directive and work to achieve better quality.

The key points that arose included

It is worth noting that, if the classification had been based on this year alone, it would be ‘SATISFACTORY’, it is only classed as ‘POOR’ as the FORMAL CLASSIFICATION is taken as being the average over the last 4 years.

Regrettably, most people fail to recognise or admit this important aspect in relation to the overall classification.

Although it is considered unlikely to be major contributory factor it does need to be monitored and assessed.

This is the responsibility of the Environment Agency.

So where do we go from here?

Early last year we had a presentation by the Environment Agency and Yorkshire Water and I have invited them to come before Members again with an update following the publication of the report and summary.

I understand representatives are more than happy to attend and I am pressing for this to take place in the near future to allow Members to ask questions directly to these organisations.

A separate one will be made to the Sea Front Traders. This will include the agreed action plan to work towards achieving the EXCELLENT classification we all wish to see. YW will lead on this in liaison with the Council.

I can also say that discussions continue to take place as to ways to identify the locations where the problems are entering the sea.

This is far from a simple problem and is unlikely to be solved quickly.

I will state that the Borough Council, through the involvement of officers and myself, continue to take an active and proactive part in the work to improve the situation, not only in South Bay but on all of our designated bathing beaches.

Finally, I need to clarify that there is no longer any Partnership Board as it was disbanded a couple of years ago when the YW work was completed.

However, through the Chief Executive, I have been promised a more joined up communication process when dealing with this issue.

In summary, I would encourage as many colleagues as possible to accept the invitation to the presentation I mentioned and take advantage of the opportunity to put your questions directly to the people from Yorkshire Water and the Environment Agency.

Setting aside, for the moment,  the customary condescension in Councillor COCKERILL’s tone, and setting aside the complete omission of the fact that the pollution problem has spread to the North Bay (resulting in the loss, for the coming season, at least,  of the coveted Blue Flag Award), and setting aside the absurdity of attributing the blame for the pollution on human/seagull/dog waste (more on which presently), I would like to ask a question.

Before doing so, though, let me remind readers of Councillor COCKERILL’s assertion toward the end of his Report, highlighted in red in the above text, and repeated here, for convenience of reference:

The ‘Partnership Board’ was disbanded a couple of years ago, eh? Now, I happen to believe this statement to be true because it has been corroborated by the man who chaired the Yorkshire Bathing Water Partnership (the body Councillor COCKERILL incorrectly styles as the ‘Partnership Board’) – Sir Gary VERITY, the CEO of Welcome to Yorkshire.

In a series of emails to an Enquirer contributor, Sir Gary has confirmed that the YBWP was wound up two years ago.

Now, please examine the following PDF file, downloaded from the Scarborough Borough Council website (though it is no longer available there – nor from the Yorkshire Water web-site, whence the “A Coast to Boast About” initiative originates…funny, that…), listing and bearing the insignia of the 5 membership oranisations which comprise(d) the Yorkshire Bathing Water Partnership – namely, the Environment Agency, Yorkshire Water, North Yorkshire County Council, East Riding of Yorkshire Council and Welcome to Yorkshire, entitled “Yorkshire Bathing Water Partnership statement on 2017 bathing water results”, which attributes the deterioration of bathing water quality (BWQ) in South Bay not to human/seagull/dog waste but to rainwater run-off  – as if no other beach in the land suffers rainwater run-off (and only in Scarborough does it wash away Blue Flags):

At the top, tight up to the left margin, is stated:

I find it extraordinary that a body which ceased to exist two years previously could publish a Report conveniently endorsing the ridiculous ‘human/seagull/dog waste’ myth, which asserts that any contribution to the pollution that may have been created by the McCAIN industrial effluent via the Wheatcroft Long Sea Outfall was negligible – scarcely worth a mention.

Allow me to digress: my dog is a large dog, a little over 50Kg. He does a poo; I bag it. And I have weighed it. An average poo weighs in at 400gms. Thus, the ‘Great Dog Poo Pollution Myth’ explodes in Councillor Mike COCKERILL’s face, right where it belongs: 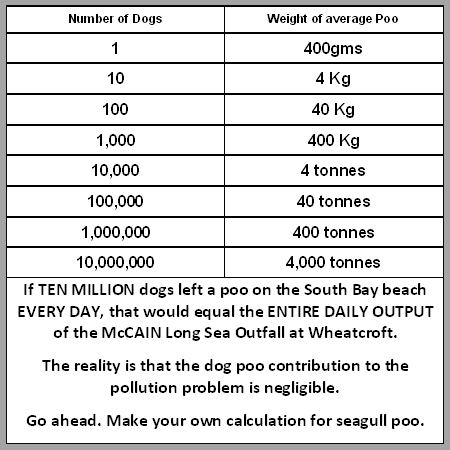 But most dog walkers pick up and bag. For the sake of argument, let us say that one in ten just leaves it right there on the beach. That would mean that it would take not ten million dogs to equal the contribution made by McCAIN’s Long Sea Outfall, but one hundred million dogs.

Even Councillor COCKERILL does not believe that one hundred million dogs per day take a dump on the South Bay beach. That would merit a Brown Flag.

Humans, of course, are generally larger than dogs. Let us, for the sake of argument, estimate that their poos are twice as large. To achieve an even footing with the Wheatcroft LSO, it might require as few as fifty million people per day taking a dump on the South Bay beach.

Seagulls may not be that much smaller than the average dog, but their poos are smaller by a factor of perhaps ten. Granted, seagulls poo more frequently than dogs, though in smaller consignments spread over a larger area which includes the sea. Let us estimate that seagulls average one hundred poos per day each. On that basis, to achieve an even footing with the Wheatcroft LSO, a mere one million seagulls per day should suffice. Shades of Alfred HITCHCOCK.

The above figures are, of course, wild approximations and may be in error by margins as extravagant as the estimated usage of the Alpamare Water Park (which, I am told, has now closed for the next four months due to lack of interest).

Returning now to the real world – and to my question, which I direct to the man whose responsibility it is to know all the answers on the subject of poo – Councillor Mike COCKERILL [Ind.Ind.], Scarborough Borough Council’s Portfolio Holder for Major Projects (who, one would certainly hope, has a ‘hands on’ approach to dog poo):

Because, in my view, either Councillor COCKERILL and Sir Gary VERITY are colluding in a lie (and not for one moment am I calling Sir Gary a liar) – OR, that 14th November 2017 “Yorkshire Bathing Water Partnership statement on 2017 bathing water results” is a convenient work of fiction. A forgery whose only effect is to promulgate he ‘Great Dog Poo Pollution Myth’ .

So answer the question, please, Mike:

Who authored and published the document above, purporting to be the

That is what I want to know. Was it you, Mike? Or one of your SBC Officers? Or was it the ghost of the Yorkshire Bathing Water Partnership? It’s a good question.

In one’s journey through life, it is inevitable (human nature being what it is) that one will encounter a liar or two from time to time.

It is useful to be able to identify the liars – most especially when the matter of standing for election arises . . . 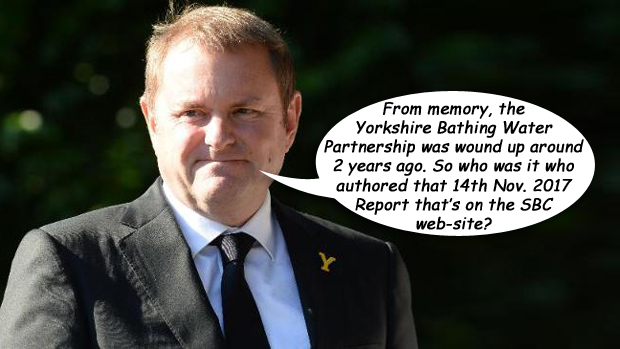