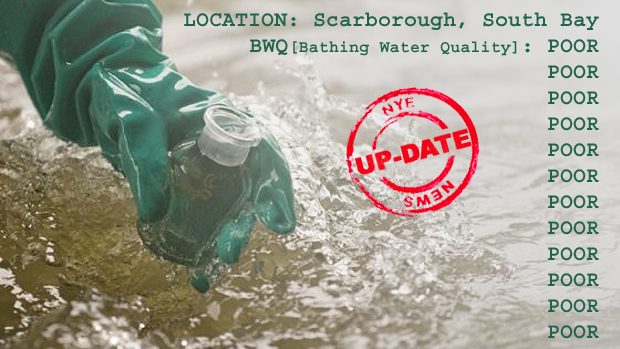 Guest Author BOB ROBERTS writes with regard to the report by Jonathan PORTER (NLS) in respect of the Final DNA Report  and the  associated Scarborough News article of last week.

Scarborough South Bay is indeed unique. What sets it apart from all other beaches along the Yorkshire Coast is that we have industrial effluent discharging huge amounts of pollution into it, on a daily basis. The official line is that there is an expectation that dilution, over time, will be an adequate solution to any pollution that must inevitably take place; then, all will be well in the world.

Looking at the accompanying map, what is obvious when placed within the context of the other beaches of Yorkshire, is that we clearly we have something going on here that the other beaches do not – and that is why other beaches achieve better bathing water quality (BWQ).

All other beaches have dogs and seabirds, just as South Bay does. Pretending otherwise is perhaps delusional. 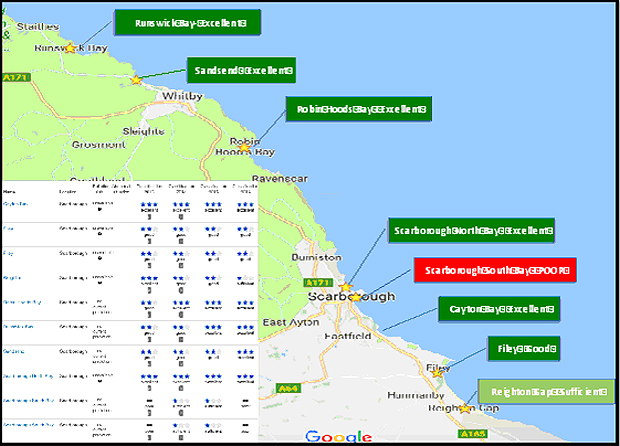 It has long been thought, but not acted upon, that the impact of the industrial discharge from the Wheatcroft  Long Sea Outfall (LSO) is having an detrimental effect on the South Bay bathing water quality (BWQ).  Indeed, the entire purpose of the DNA campaign in its original form was to determine the influence of the discharge on BWQ in the South Bay.

The questions surrounding the issue of South Bay BWQ originated when rupture of the steel pipeline clearly demonstrated the contents of the discharge and the effect it was having on Cornelian Bay. The warning bells subsequently rang loud and clear for a very long time, yet have been largely ignored by a variety of agencies and companies, along with SBC.

Obviously, where bacteria has been found to be responsible for the downgrading of BWQ in South Bay, high bacteria counts are only a part of the catastrophe that the marine environment faces; not only in Scarborough, but globally. The assumption by McCains and its contractor Yorkshire Water (YW) that the seas can be taken for granted and simply used as dumping ground are surely over.  The balance of survival of the marine ecology is now at tipping-point and iwe should be aware that its not only the plastics that we dump into the seas but also the things we don’t see that cause the greatest harm.

The problem, therefore, is not confined to bacteria; other pollution issues need to be addressed.

Back in 2015; came disclosures of the existence (in what was described as “potentially significant levels”) of  1.2.4 Tricholorbenzene (TCB) from the Wheatcroft Long Sea Outfall (LSO).

TCB 1.2.4  has been positively identified to have an adverse effect on the feeding behaviour, the growth and the early mortality of fin-fish.

The draft DNA report recently released by the  by the Environment Agency with regard the bacterial issues affecting Scarborough South Bay has now been thrown into doubt following the release of a further and final report by Jonathan Porter, regarded as eminent microbiologist within the Environment Agency.

In Jonathan Porter’s report, which is the  Final EA report, Porter states:

Porter does, however, present some good news:

He also goes on to state;

That is an interesting comment, perhaps if a full data set had been taken then that percentage may possibly have risen to 70-80% of the time and the problem thus identified.

In yet another report, undertaken in 2015 (Hull University Campus, for the Environment Agency) it stated that:

It seems there is very little confidence in the assumptions made previously blaming dogs and seabirds as being the main culprits in the pollution issues.

Of course, anyone with a modicum of common sense realises that other beaches along our coastline also have dogs and seabirds.

Furthermore, what the report is unable to tell us is this: where to lay the proportions of blame? Seagulls, dogs, industrial discharge – even the poor old donkeys – being in the firing -line, with only the donkeys coming out smelling (almost literally) of roses.

To put this in perspective; I find it ironic that, back in September of this year, our scientists were able to determine the contents of the atmosphere on Saturn (at a range of around 740 million miles from earth, on a good day), yet here, on planet earth, we are unable to competently track the tidal currents of our coastal seas accurately and determine the source and – equally importantly – the quantities in which the bacteria and chemicals are affecting the seas around us.

Perhaps it is time for Yorkshire Water to be digging deeper into their profits of £248 million (2015/16), rather than the onus resting on the Environment Agency (EA). Time to deploy some seriously advanced technology (which is available in the form of satellite imagery and the use of spectrometers, UV and infrared and other sensors) which is currently available and are already used in the Oil & Gas and Environment industries.

Openesss, honesty  and transparency would also be welcomed – rather than spin, as peddled in their very intensive social media campaigns.

My original concerns, following the spill from the ruptured pipeline back in late 2011, illustrated the type and quantity of waste that Yorkshire Water discharges from the Wheatcroft pipeline – the Long Sea Outfall (WLSO). For those who don’t remember it is pictured below. 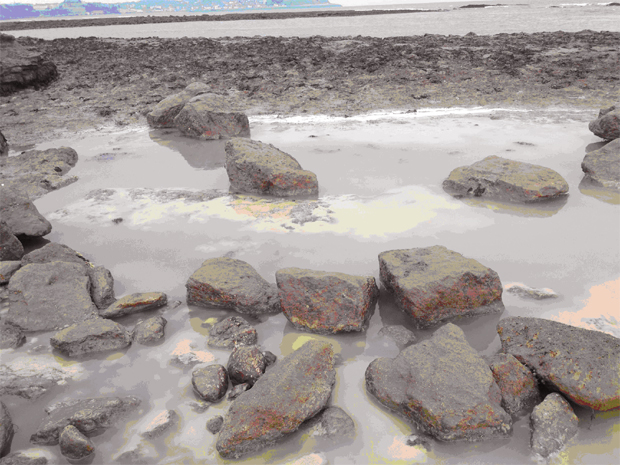 According to Yorkshire Water documentation, the original Wheatcroft LSO was constructed in around 1997, but was  considered to be no longer serviceable due to leaks caused by excessive corrosion of the inner wall of the pipe. One of the aims of the LSO replacement works was is to improve BWQ (bathing water quality) in the long term.

The pipeline was commissioned and set in operation in around June of 2016. Its lifespan has been very short in terms of sub-sea pipelines and, as stated, suffered severe corrosion. The EA requested to understand better the cause of the corrosion samples of the failed pipeline. YW subsequently refused. Again, openness and transparency would go a long way.

We have seen no improvement of BWQ since the meeting in Scarborough Town Hall on Dec 12th 2016 – and it is entirely probable that the North Bay could face the same fate in 2018, since the tidal model used by Yorkshire Water is now believed to be flawed. The pipeline is some 500m longer than the pipeline it replaced, yet even Yorkshire Water have admitted, in their business documentation, that:

The Porter report makes little mention of the chemical analysis of water-sampling, although the relatively easily-sampled and unusually high PH values were observed on August 8th.

It is known that high PH has links with ammonia. Even back in 2006,  with data presented to the Marine Conservation Society (MCS), it was noted that ammonia levels had risen significantly. The potential for harm in a marine environment is enormous.

Also in 2015, we had disclosures of the existence in what was described as “potentially significant levels” of 1.2.4 Tricholorbenzene from the Wheatcroft LSO.

1.2.4 Tricholorbenzene is positively known to have an adverse effect on the feeding behaviour, growth and mortality rates of fin-fish.

According to the Environmental Impact Assessment (EIA), the effluent pipeline passes through cod nursery grounds and herring spawning grounds. Little to no evidence of the continued presence of either of those types of fish exists in the South Bay waters today. All gone.

Consequently, Yorkshire Water have something to answer for, with regard how they have handled their responsibilities. To me, it seems that the Environment Agency are being more pro-active than Yorkshire Water themselves. I understand that the mandatory “Consent to Discharge” has still not been issued, despite the pipeline being in operation since June 2015,  and that a “Local Enforcement Plan” (LEP) is still being relied upon as a temporary measure. How long that temporary measure can continue to hold any validity is unknown – but it must have a limited lifespan. In any event, too late for the cod and the herring.

Yorkshire Water’s ineptitude in managing our water supplies and, more importantly, the management of our sewage and drainage along the Yorkshire Coast, has been woeful and wholly inadequate.

It is almost a year since YW and the EA held a meeting in Scarborough Town Hall to present their findings and reassure the public that “all is well and we’re working on it”.

Scarborough now faces 2018 with the same situation; advice against bathing and the same pollutive discharge spilling into our bays at an alarming rate.

We may now even face the possibility that even the highly risk-averse RNLI (who have now concluded their 5-year contract for provision of lifeguard cover on the South beach) may not tender for the renewal of the contract. 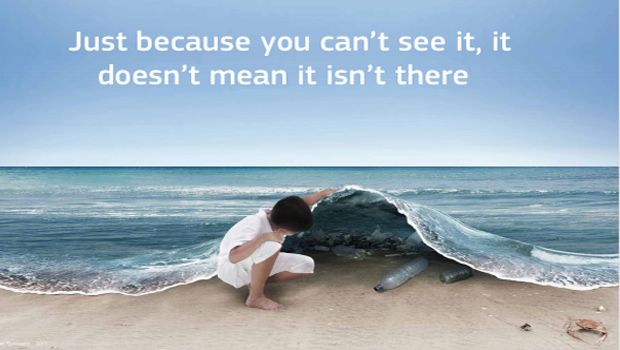 There should now be, from YW management, a full and open disclosure of the entire content and volume of what they discharge, since they – and only they – are the consent holder for the Wheatcroft LSO. This disclosure must include what are thought to be highly aggressive cleaning agents used within McCain’s industrial process.

In addition since Yorkshire Water have also conducted their own DNA sampling campaign they should make a full and open disclosure of their findings.

Surely, in this day and age, this is simply unacceptable and YW should work with McCains (who are their paymasters) to accelerate the program toward the discharging of ONLY clean water only into the bay (thus replicating the procedure which currently exists  their sister plant in Peterborough discharging into the River Nene.

Only then will be see an improvement in the South Bay BWQ. 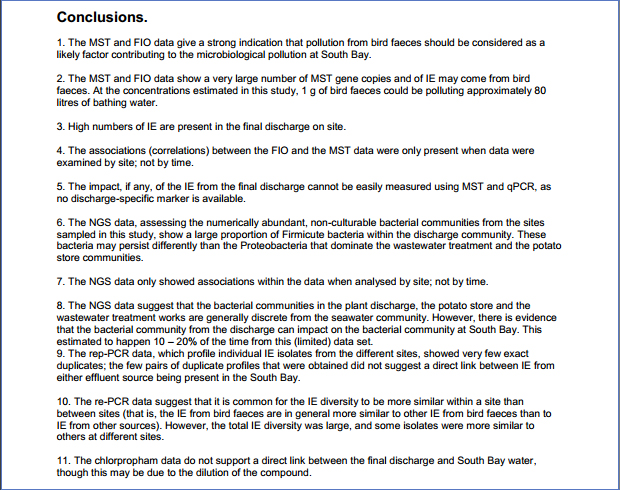 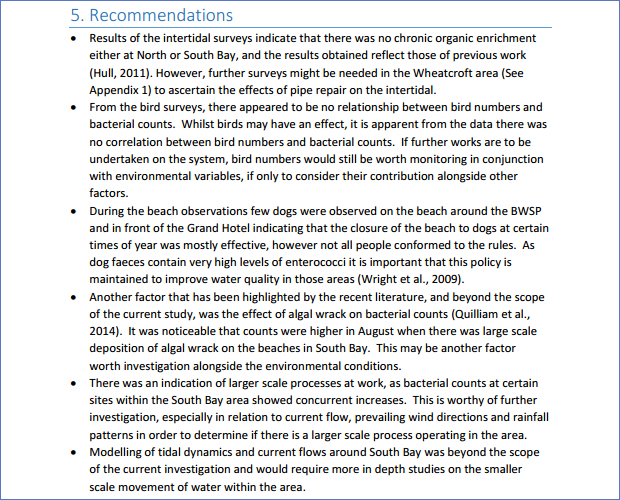