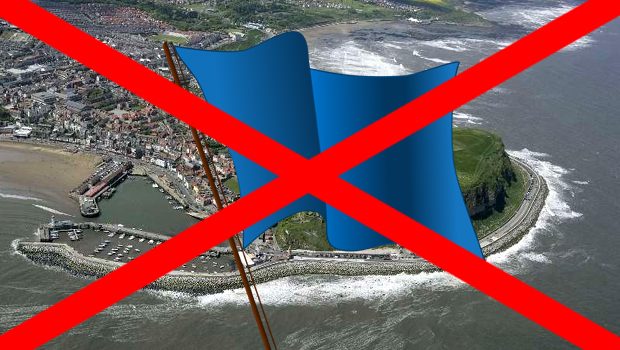 May 1st saw the start of the annual beach ban of dogs on the bathing beaches across the Borough of Scarborough.

The Environment Agency (EA), having commissioned extensive testing of bathing water quality during 2016, has indicated that seabirds and dogs have contributed to the poor water quality, along with the rarely-mentioned industrial effluent waste discharged via the dedicated pipeline from the McCains potato processing plant at Cayton – what is termed the Wheatcroft Long Sea Outfall (WLSO).

The WLSO discharges on a daily basis in the region of 4,000 metric tonnes of effluent waste, largely composed of organic potato material along with chemicals and bacteria via the YW-managed pipeline on behalf of McCain Foods GB. McCains are, as a consequence, Yorkshire Water’s customer.

May 17th will see the annual announcement of the latest 2018 “Blue Flag” beaches in England. Sadly, and for the first time since 2003, the North Bay will lose its coveted “Blue Flag” status with bathing water quality being downgraded from “Excellent” to “Good”.  This is despite Yorkshire Water who, with £55 million of public money, have invested heavily in supposedly state-of-the-art treatment plants and waste water storage facilities, specifically in order to improve water quality – without any mention of improvements to our delicate marine environment.

Despite this huge investment by a private company (with the privilege of tax payers’ money) the water quality project has abjectly failed to make any inroads whatsoever into improving the water quality within Scarborough’s South Bay with it remaining at its status of “Poor” and bathing being advised against. It would seem now we are seeing a deterioration of North Bay water quality, too.

If the situation continues for a couple of more years then, according to the legislation, its entirely possible that the South Bay will have it’s bathing water status removed and bathing may possibly be even banned altogether.

That, of course, is also notwithstanding the fact that, unless Yorkshire Water take positive remedial action, then there are no guarantees that the North Bay situation will not also deteriorate further, dragging the North Bay into the same situation that the South Bay now faces. It goes without saying that this would be disastrous – not only for the marine environment, but also for very future of the town and its stature as the leading seaside holiday destination on the east coast of England.

Meanwhile Yorkshire Water appear to be unable to give any indication of how they intend rectifying and reversing what appears, to many, to be a downward spiral in terms of sorting the sewage issues of the town.

Blaming a few dogs (banned during the summer months) and a few seagulls (which many other beaches also have) is simply farcical and really is an insult to any right-minded person.

Meanwhile, SBC frantically scramble about trying to mitigate the reputational damage rather being realistic. Solving the problem with benign measures like the introduction of chemical toilet facilities on Vincent Pier (which will only serve the motorhome community of PortaPotti-users) and even contributing Council tax-payers’ money to shore up the Environment Agency’s vain efforts in their attempts to get to the source of the on-going problems facing our already damaged seas.

This is while Yorkshire Water, who apparently during 2016, whilst discharging via the WLSO without a permit of any kind, even avoided prosecution from EA’s enforcement team. The EA’s own legal team advises that this was “not in the public interest”. This then begs the question of in whose interest it was when a private company can discharge, on a daily basis, 4,000 tonnes of effluent waste, equal to – if not more damaging to the local marine environment than – populist plastic waste. Surely that’s “fly tipping’ – literally on an industrial scale?

Even now in the absence of a “valid consent” following the installation of a replacement pipeline – which invalidates the old much stricter EA consent – YW now discharge under what is known as a Local Enforcement Position (LEP). The LEP, amazingly, has no limit on either content or volume – with the very real possibility that the now-obsolete consent has been exceeded.

Anyone who visits the North Bay with some measure of regularity will know that seabird numbers are much lower than in the South Bay. It is entirely open to conjecture whether, even in the South Bay, seabirds have had the impact that both the EA and YW would have us believe; especially since the DNA testing is unable to apportion any kind of proportionality over any of the suspected culprits, whether they be dogs, humans, seabirds or indeed the industrial discharge from McCains.

The fact of the matter is that the EA have no real idea of what is discharged from McCains, amazingly. This is in 2018 when scientists are able to determine the contents of the atmosphere on Mars.

Is it entirely coincidental then that the only thing that has changed in the last 15 years during which the North Bay has enjoyed its water quality at “Excellent” – proudly flying the coveted “Blue Flag” – is the introduction of the relocated discharge effuser at the end of the moved WLSO closer to the North Bay?

It has become common knowledge that the computer model as used by YW in order gain an overview of the currents/tidal influences in conjunction with discharge volumes, etc, is flawed.  Subsequently, Yorkshire Water, as an unintended consequence of extending the WLSO further toward the North Bay (using £7 million of YW customers’ money), and being  the custodians of water quality in Yorkshire, and having spent £55 million of cash from the public purse, have presided over only a further deterioration. Should we by now be asking if Yorkshire Water have the competencies they would have us believe to manage and maintain Yorkshire’s drainage and water provision infrastructure.

Surely, by now it is becoming obvious that they (Yorkshire Water) do not have those qualities and we (the public and, as such, the paying consumers) should have a choice that  exists in choosing providers of essential utilities, as we do with electricity, gas and telecoms?

For us in Scarborough, we see no light at the end of the tunnel with regard to any improvement, primarily, the marine environment, rather than the threat to tourism – which is, in any case, itself largely dependent on the bathing water quality. Scarborough Borough Council have instead fixated on the populist (and welcome) removal of plastics from our seas – but remain entirely ambivalent regarding the discharge of some 4,000 tonnes daily of a waste that is equally alien to our oceans as is plastic. Populist “tick box” politics at its worst.