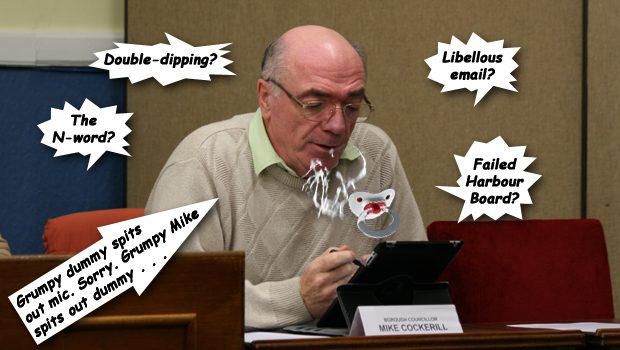 Today, 31st January 2018, a Whitby businessman and leisure boat operator wrote an email to requesting a meeting with the following four Scarborough Council representatives to discuss the current and proposed arrangements for how Whitby Harbour is to be managed and administrated. The email, reproduced below, was addressed to:

The email in question is concise and cordial. It could not be said to occasion offence; it is not “vexatious”. It is not, by any stretch of the imagination “unreasonable”:

I would like to have a meeting with you all about the way the harbour is being run. Could this be arranged please?

At the time of writing, the Whitby businessman has received acknowledgement of his email from only one of the four recipients – Councillor Mike COCKERILL [Ind.Ind.], who at first constrained himself to a response so brief as to appear rude in the extreme:

So astonished was the Whitby businessman by this perfunctory response that he immediately replied to Councillor COCKERILL, politely seeking an explanation, thus:

Why’s that may I ask?

Because I say so as it is my responsibility.

Presumably, Councillor COCKERILL intended to type “End of dialogue”. But who knows?

I now have a large collection of emails from Councillor Mike COCKERILL [Ind.Ind.] terminating correspondence with residents/electors in variations of this same theme – “End of dialogue”. Councillor COCKERILL does not acknowledge my emails at all.

Readers are, of course, invited to form their own conclusions about Councillor Mike COCKERILL’s attitude to his duty to serve the public, showing respect to all, in accordance with Lord NOLAN’s Seven Principles of Public Life.

But some will recall that Councillor COCKERILL, during his term as a NYCC County Councillor (running concurrently with his SBC tenure), was one of those who accepted Broadband/IT Allowances from both Councils for a single internet connection – a so-called “double-dipper”.

Others may recall that this is the man under whose Chairship the Whitby Harbour Board was abandoned as “Not fit for purpose”.

Others may recall that this is the man who used the “N-word” during a meeting of Filey Town Council.

The plain truth is that Councillor COCKERILL has demonstrated, time after time after time, that he lacks the competency, the intelligence, the common courtesy and humility to act as a servant of the public.

His continued appointment to the SBC Cabinet is a measure of the extent to which SBC Leader Councillor Derek BASTIMAN [Con.] has scraped the very bottom of the barrel to populate his despised Cabinet.

And COCKERILL’s Portfolio is the one that no-one wants because it requires specialist knowledge and open engagement with Harbour users. Real work.

In my opinion – and it is an opinion shared and long-held by Town and Borough Councillors – the job is beyond Mike COCKERILL. Arguably, any job is beyond the man. He has admitted in his email (above) and cannot deny that Harbour management is his responsibility. He has set down in writing that he refuses to address that responsibility with a member of the public who is also a client of the Borough Council. How much longer will the public tolerate shelling out the better part of ten grand a year for a man who has refused to do his job – because he says so?

One way of off-loading him would have been to demote him to the purely ceremonial rôle of Mayor (the JACONELLI slot) – but that expedient has already been applied to another PR disaster – Councillor Joe PLANT [Con.]. In any case, who would replace him? If there were a Tory up to the job, then Councillor COCKERILL would be out of a gig anyway.

So now we await signs of an attempt at retribution against the Whitby businessman he has treated with such contempt, for exposing his conduct to the Enquirer. Clearly, professional bias might be an irresistible temptation to a man of weak character who resents public disclosure of despicable conduct. Should retribution arise, there will be serious consequences. Abuse of a position of trust is serious business.

At the cost of the Leader being left with another empty Cabinet place, the time has surely come for Councillor COCKERILL to resign (as he did from his unpaid duties at Filey Town Council).

Personally, I would not leave him in charge of an empty mop-bucket.