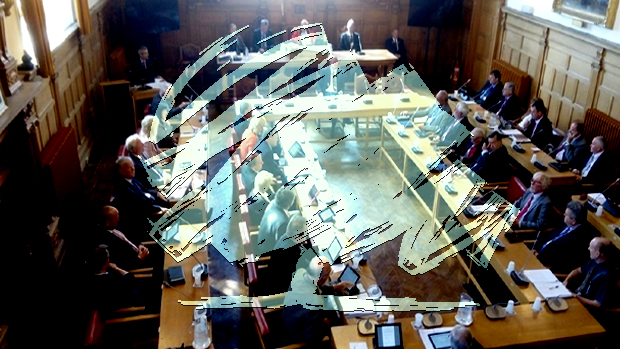 Councillors of the Cabinet,

Permit me to offer my personal opinion, under the protection of Article 10 of the ECHR.

In the days following the Extraordinary Meeting of 26th June 2017 (‘Extraordinary Meeting’, with the benefit of hindsight, now seems a rather inaccurate characterization; ‘Unprecedentedly Shambolic Meeting’ would be nearer the mark), I have solicited,  and been freely offered, many opinions from across the length and breadth of the Borough.

A consensus amounting to almost total unanimity supports the view that it is obviously the case that you all had No Confidence whatsoever in your forty-two non-Cabinet colleagues – for had you taken the honourable course and refrained from compromising the Monitoring Officer with your invidious requests for Dispensation, you would have been at the mercy of your own peers, from who you clearly expected a humiliating rejection.

And you were bound to do so; without the nine odious Dispensations (who paid for that ‘external legal advice’?), the Motion must have carried by 19 votes FOR versus 16 votes AGAINST the Motion; in effect, against all of you – and despite Councillor PLANT’s application of the Whip.

Some amongst you may have recognised the risk attendant upon recusing yourselves from the vote and thereby embracing the fair verdict of a natural majority (to add to the Resolutions of two Town Councils and a voluminous public petition) – the risk, that is, of appearing hapless, beleaguered and vulnerable. Alone in the Borough, not one of you appears to have recognised the moral bankruptcy of your actions.

In acting as you have, you have placed your own interests – prejudicial and pecuniary – before the interests of the electors whom you purport to represent because you were afraid of the judgement of those you purport to lead. Could there be any clearer indicant of your unfitness to lead? Do you not see how pitifully weak and insecure you have shown yourselves to be?

So you are now doubly damned; first, for your practice and policy of secrecy, evasion and disingenuousness; and now, again, for your rank cowardice.

The ‘Extraordinary’ nature of the Meeting is now a matter of public record which will stand, until the occasion of your next abuse of position, as the low-water mark of your abysmal period of tenure. I invite you to view the webcast at your leisure, further down this page. View it and cringe.

And could you direct me, please, to the legislation which authorises a Councillor to change her/his vote?

As to the Mayor:

Councillor Martin SMITH [Con.], the new Mayor, in his febrile attempt to assume command of the Meeting, provided only a parody of good governance, vividly reminiscent of CHAPLIN’s “The Great Dictator” (see below).

Surpassing even his immediate predecessor, that paragon of ineptitude Councillor Simon GREEN [Con.], the present Mayor has made an enduring laughing stock of himself – a pompobulous blimp.

He began with a rehearsed feint in the direction of propriety:

“May I also ask members of the Council to debate this issue with a modicum of decorum and the respect it deserves?” [1:19]

In the event, he was the first to abandon his own adjuration.

Duty-bound to impartiality, the Mayor was swift to manifest his extreme bias in allowing the Leader free rein to harangue the Proposer with a salvo of personal jibes, without exception inapposite to the Motion, which simultaneously insulted both Councillor CROSS and the 762 Filey electors who had voted for him in the recent County elections – the same electors who, I recall, rejected Councillor COCKERILL in favour of Councillor CROSS (though COCKERILL was never butt to the Leader’s scorn). This was blatant disrespect and unmitigated hypocrisy, passively condoned by the Mayor.

Paralytic with perceived power, the Mayor then attempted to assert his supreme ‘authority’ over his paymasters, the public, thus:

“Oy! Oy! Excuse me! ‘scuse me! One…one more attempt at that and I’ll ask the gallery to be cleared immediately. NO MORE CLAPPING! I have already told you the situation. I WILL clear the gallery.” [6:45]

Transcending common farce, the Mayor, having first invited the Proposer to introduce the Motion, then proceeded, throughout the Proposer’s attempted delivery, to bray like a foreshore donkey in paroxysms of desperation to suppress the truth:

Eloquence beyond the dreams of Shakespeare!

And then the Mayor interrupted Councillor Rob BARNETT [Lab.] to silence the acclaim of those in the public gallery, whose polite applause was an entirely appropriate expression of democratic support – unless one condemns the voice of the public as a tedious irrelevance, as some of you clearly do.

You will all recognise, I am sure, that the Extraordinary Meeting must be rescheduled and the vote must be taken again; your Mayor, in a final excess of ignorance, bloated by his inflated sense of auto-omnipotence, neglected to re-instate Standing Orders; ergo, the Resolution is null and void and the Motion remains unaddressed.

The Mayor, upon resurrecting this dysfunctional Meeting (following that ludicrous intermission and its ensuing waste of Police resources), again snubbed Councillor BARNETT [Lab.] by neglecting to invite him to complete his statement. Once more, I contend, a contemptible disrespect on the part of the Mayor.

And how can it be that neither the Monitoring Officer nor the Chief Executive was able to advise the Mayor that the public enjoys a statutory entitlement to film/record Council Meetings, and that no Resolutions of the Council are valid during the suspension of Standing Orders? Does anyone amongst you know anything about local governance? So there are further questions of competency, which I will reserve for another day.

All things considered, Councillor Martin SMITH has not, in my view, proved a prudent nomination for the role of Mayor, the Council’s public-facing ambassador. Many have expressed the same sentiment, though not all in such temperate language. (I am not familiar with the word “cockwomble” but I gather it is intended to express derision and contempt). Without doubt, the Mayor has brought shame and disrepute upon a Council whose standing has already been cast into the gutter by the court of public opinion – and deservedly so.

Obviously, the Mayor must resign.

In passing, the video and audio from the public gallery, particularly during the ‘intermission’, is also agreeably illuminating; no doubt it will feature in future election campaigns.

In summation; Filey has been betrayed by Councillor COCKERILL, whose defection from the Town Council transparently demonstrated upon which side he considers his bread to be buttered. (You may wish to respond, Councillor COCKERILL, to my enquiry apropos the steps you have or have not taken to establish whether or not the cladding on The Futurist Theatre may be composed of flammable materials. Perhaps you are hoping that the theatre will be razed to the ground?).

Whitby has been left in the lamentable position of having had three local Councillors elevated to Portfolio status – Conservative Councillors NOCK, PLANT and TURNER, all of whom seem to struggle with the pronunciation of the word ‘prejudicial’ and are clearly unable to grasp its underlying concept. They have betrayed their respective electors. (Councillor David CHANCE [Con.], be it noted, most shrewdly stayed away – not for him the stigma of public betrayal). Like the rest of you, all three Whitby members have exceeded the bounds of common decency by voting for themselves at the expense (in both senses) of the people of their town who, almost without exception, have No Confidence in them – or, indeed, in any of you.

The people of Scarborough have time and again been disappointed by the performance of Councillors BASTIMAN, CHATT and JENKINSON, just as they have been enraged by Councillor MALLORY, whose representations regarding the costs surrounding The Futurist Theatre have been shown to have been downright false and grossly misleading to Councillors – on a pivotal Motion, carried by a single vote (itself a betrayal of electors).

Have you the courage to re-visit that tainted decision? After 10th July 2017, you will be free to do so.

Not one of you has evinced the wit to recognise the extent of your own  failures and pratfalls – too many to list here – and an almost universal public disapprobation. You have performed lamentably. Aware of your own shortcomings, you have relied too heavily on inadequate and imprudently appointed Officers – some of them liars. You have attempted to play Monopoly with the public purse and you have failed. You are a wash-out. A dead loss.

In particular, though, the decision (whose decision?) to withhold, from Councillors and members of the public, copies of the Mazars Report on their ‘external’ investigation into the Ben MARRIOTT allegations of fraud and corruption – which followed the Council’s own internal non-existent investigation, described by His Honour Judge Humphrey FORREST as “a complete whitewash”) – is an insult both to members and to electors. It carries all the hallmarks of an unscrupulous attempt to protect criminal employees and may also amount to a perversion of the course of justice – on your watch.

Clearly, most of you remain unconcerned about having been completely discredited by your exposure as incompetent dissemblers – unconcerned, that is, so long as you retain your precious veneer of ‘power’ and its associated ‘privilege’.

Recent events in the capital have demonstrated that the Cabinet system is not fit for purpose; your own Cabinet, in this respect, has been exemplary.

In my view, you are all washed up now, you sorry bunch of self-serving mediocrities. You disgust me.

In the public interest, just pocket your Allowances and go.