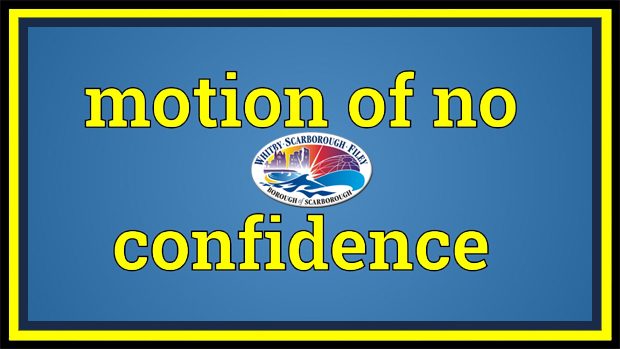 Following the publication (here on the Enquirer) of the leaked Councillor Sam CROSS report to Filey Town Councillors regarding the extraordinary and apparently unconstitutional conduct of SBC’s Director of Legal & Democratic Services and Monitoring Officer, Mrs Lisa DIXON,  and Scarborough Borough Mayor, Councillor Simon GREEN [Con.], the Scarborough resident who initiated the GoPetition poll soliciting public support for the Vote of No Confidence has now provided the outcome of the poll – surnames redacted, public comments included – to all of the 42 Scarborough Councillors who are not members of the Cabinet, in PDF format, attached to an email.

You may wish to inform yourselves of the strength of feeling running through our towns within the Borough of Scarborough by reading the attached document and associated comments from those who have signed the NO confidence vote.

As you know, Whitby and Filey have already stated their stance with regard Councillor Bastiman and his style of democracy within the Borough.  It is quite probable that Councillor Bastiman and his Cabinet believe they are doing what’s best for the Borough, as misguided as that may appear.  That opinion is not, of course, obvious to us, the Council Taxpayers; for it is we who pay for their Allowances; it is we who pay the wages of those who continue under this Leadership to undertake highly questionable practices – those who make unconstitutional decisions and encourage others to ignore or bend the rules of the Constitution of the Borough.

It is entirely likely that this Vote of No Confidence will carry in the Council Chamber. Why not do the right thing and disband this Cabinet and start afresh with a real Cabinet – made up from across the spectrum of the entire council – showing what real democracy can do for the Borough, if allowed to do so.

It is all in your hands for you to do the right thing now, rather than sit it out for the next two years of continued contempt at the hands of the electorate and the press.
Kind Regards,
The Petitioner

Interestingly – though unsurprisingly – the petitioner informs me that SBC has blocked his email address and it was necessary to create a new one in order to pass the information to Councillors. Did someone say, “S.T.A.S.I. Borough Council!”?

Please give the Petitioner’s attached PDF document a moment to load – it is a l-a-r-g-e document. But do, please, read at least some of it. It is a relentless catalogue of discontent and resentment. (The public comments begin on Page 50).

Never in the history of the Borough has such a damning indictment of elected representatives been circulated amongst ‘the great and the good’ – in the light of which, only those members who have no plans to seek re-election to SBC in 2019 couldconceivably, having read it, be so undemocratic (or plain stupid) as to vote AGAINST the Motion. Of course, many of them will not take the trouble to inform themselves, taking the view that it is of no consequence what members of the electorate have to say – especially so with the next SBC election two years away.

Meanwhile, the Scarborough News has now covered the story broken by the Enquirer on 25th April, since which time hundreds (perhaps thousands) of impromptu Labour leaflets have been appearing all over the Borough, leaving little doubt as to which way the Labour Group intends to vote when the Motion finally goes before Full Council – FOR.

Readers may remember the main points of the Labour Press Statement:

Red, green or grey, it is hard to see who but the Tory nodding-dog brigade could take issue with that – unless, of course, they are actually proud of their Leader’s many failings and blunders and do not give a flying flock about “accountability” and “transparency”. 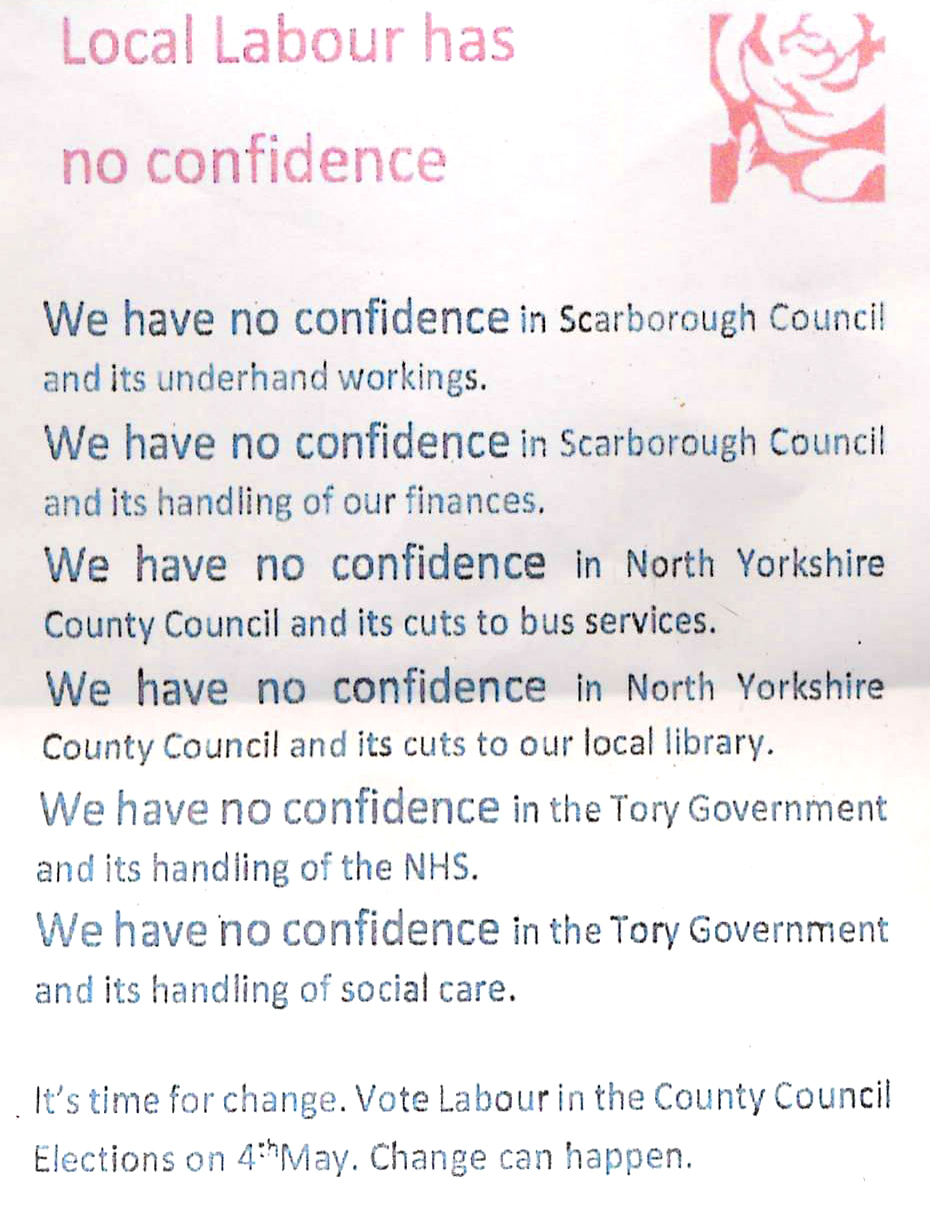 Meanwhile, Scarborough Borough Council has published the Agenda for the Meeting of Full Council on 8th May 2017:

From the Letters page of The Scarborough News (27th April 2017) 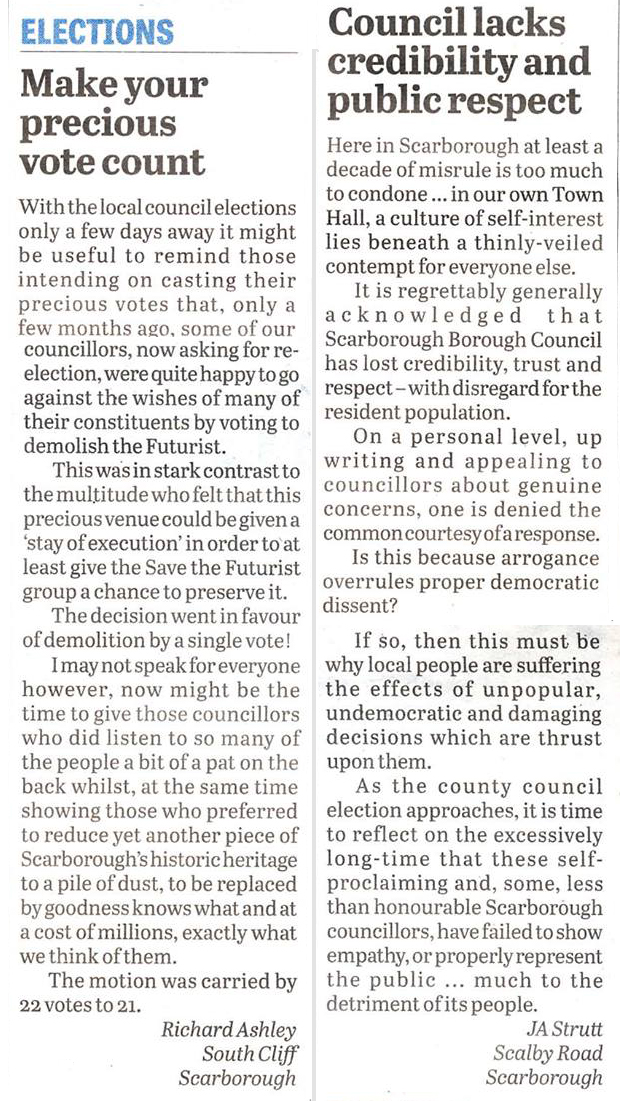 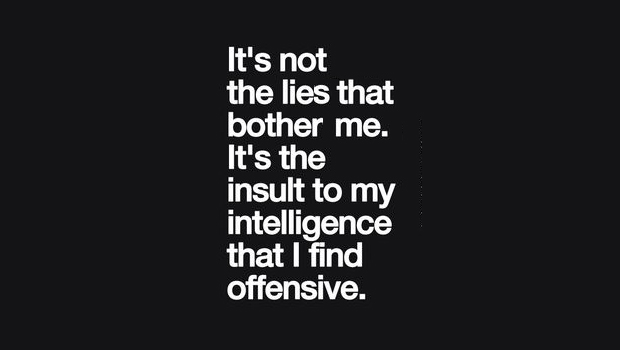