“To register a Recorded Vote for or against a Declaration of No Confidence in the Leader and the incumbent Portfolio Holders of his Cabinet, of today’s date, Proposed by Councillor Sam Cross and Seconded by Councillor Jonathan Dodds”.

The Requisition goes on to state:

“In the interests of openness and transparency, we draw to your attention the fact that the Leader and Portfolio Holder members of his Cabinet (as of the date of the Extraordinary Meeting), being interested parties as identified in the single Item of Business, will not be eligible to vote.”

Eligible or Not Eligible?

That is the question. In all likelihood, Monitoring Officer Lisa DIXON will ‘rule’ in favour of the Leader and Cabinet Members being permitted to vote in a Motion in which they are identified as interested parties. Legal opinion varies on this point, but the most compelling argument should prevail – namely that allowing the Leader and Cabinet to vote for themselves would be legally indistinguishable from permitting a man charged with, say, burglary to serve on the jury at his own trial, which is plainly absurd – and likely to exacerbate the widespread public opinion that the BASTIMAN régime is operating like an unaccountable dictatorship, dragging the whole Council into disrepute.

Still, power corrupts, etc – and when did the incumbents ever give a damn for public opinion?

Inevitably, speculation is rife as to the prospects of the Motion being carried – or defeated, as the case may be.

Each of the 42 Councillors who are eligible to vote has 4 available courses of action:

Now that temporarily abandoned former Portfolio Holder Councillor Michelle DONOHUE-MONCRIEFF [Con.] has been re-admitted to the Tory fold, there are 26 Conservative Councillors, though 6 of them (including the Leader) will be unable to take part in the vote, in virtue of their positions as Cabinet Portfolio Holders identified in the Motion, leaving 20 Conservative Councillors who will be heavily whipped to vote AGAINST the Motion.

How will they vote this time? That may prove to be a key factor.

Councillor Andy BACKHOUSE [Con.] has been mooted as the natural successor to the Leadership. Councillor Luke BACKHOUSE, despite his abstention in the Futurist vote, is known to be strongly opposed to the ‘demolition’ decision. My guess is that the best the Tories can count on from these two is for them to be ABSENT or, if present, to ABSTAIN. But it would be foolish to discount the possibility of either of them voting FOR the Motion.

Then there is Council Hazel LYNSKEY [Con.], who is far from being a fan of the Leader. Her partner (a former Councillor) openly signed the GoPetition Vote of NO CONFIDENCE [2,463 signatures], and commented, as her criticism of the Leader and Cabinet:

On balance, my guess is that the best the Tories can count on from Councillor LYNSKEY is for her to be ABSENT or, if present, to ABSTAIN. Again, she may stand on her conscience and vote FOR the Motion. Another hard one to call.

2 Tory Councillors are unlikely to attend for personal reasons; perhaps one or two more.

So, as far as the Conservatives are concerned, it may be unwise to count on 20 votes AGAINST the Motion – it could be as low as 15, through absence or abstentions.

Between 15 and 18 votes AGAINST the Motion.

However, there are presently 4 Independents, 2 of whom are Portfolio Holders (and Tories in disguise), ineligible to vote.

One of the two eligible, Councillor Janet JEFFERSON [Ind.], is one of the signatories to the Requisition and can therefore (presumably) be relied upon to vote FOR the Motion.

The other – Councillor Vanda INMAN [Ind.] quit the Labour Group rather than accept a minimalist slap-on-the-wrist three-month suspension for defying the whip and voting in favour of ‘demolition’. But she is staunchly socialist and would have to be in a particularly vindictive frame of mind to support the Tory Leader and Cabinet after a lifetime of strong commitment to socialist values. Many of the Labour Group may think it is time to welcome her back into the Labour fold – just as the Tories did with the briefly errant Councillor Michelle DONOHUE-MONCRIEFF [Con.]. Of course, Councillor Vanda INMAN [Ind.] may ABSTAIN – or find a convenient justification to be ABSENT. My guess is that she will sincerely represent the will of her electors, so a vote either FOR or AGAINST the Motion is not out of the question

The thirteen-strong Labour Group is expected to exert the whip to vote FOR the Motion, although one member may be unable to attend for personal reasons.

Coming now to the UKIP Councillors; all 5 can be relied upon to vote FOR the Motion.

And then we have the 2 Greens. Councillor Dilys CLUER [Green.] is the Green Group Leader. My guess is that Dilys will straddle the fence. But if she were to vote AGAINST the Motion, there is more than a chance that she would take Councillor Mark VESEY [Green.] with her. They could also cancel each other out with a vote each way – which may appeal to Dilys as a satisfactory fence-straddling outcome.

On balance, the possibility exists that Councillor Derek BASTIMAN [Con.] could just about scrape enough support to avoid losing the vote outright. Or it could be so tight that Mayor Simon GREEN [Con.] is called upon for his casting vote – which would afford the leader only the hollowest victory imaginable.

However, the only result that would allow the Leader to continue in office with anything even approaching adequate moral authority to go on would be a landslide in his favour – i.e. with as few as 10 votes FOR the Motion.

A vote AGAINST the Motion in the order of 30 to 10 would achieve just that, and we could all settle down to another two years of the squalid third-world style of junta politics that we have endured for the past two years.

But this is unlikely, in the extreme. Even a charitable view of Councillor BASTIMAN’s level of support suggests a tight finish – which is simply not good enough. Without overwhelming support, BASTIMAN should do the right thing and relinquish control.

There is, however, another possible outcome – and an honourable one at that.

In the absence of any prospect of a resounding endorsement, which looks unlikely in the extreme – to the point of clutching at straws – Councillor BASTIMAN [Con.] just might attempt to salvage some vestige of dignity by dissolving his Cabinet and resigning the Leadership, thus restoring some credibility in the Council.

I leave it to readers to decide for themselves as to whether or not Derek BASTIMAN is a man of that calibre.

Finally, when the vote is over and the dust has all settled, who would the people like to see in the Leader’s chair?

That would appeal to few.

Who, then? Councillor Helen MALLORY [Con.]? Scarborough’s very own Teresa May?

Or will this be the moment of destiny for Councillor Andy BACKHOUSE [Con.]? 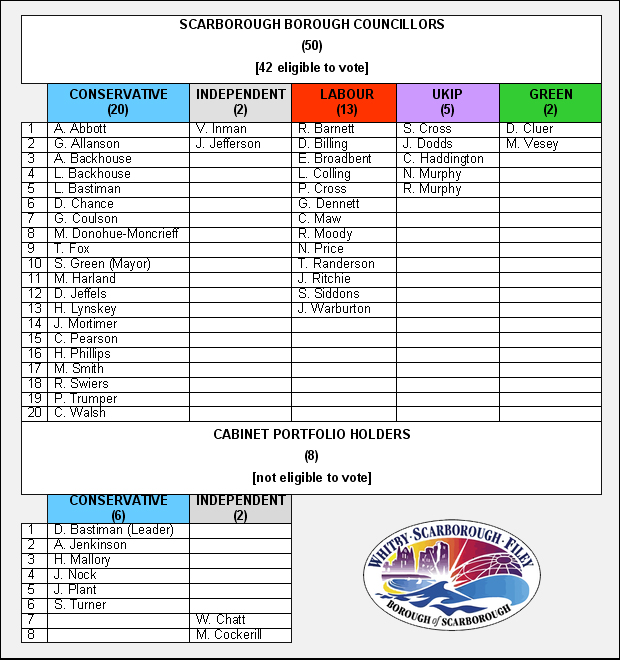 Concerned residents who wish to lobby Councillors to vote FOR or AGAINST the Motion, or to urge RESIGNATION, can do so by emailing them at the following addresses (listed alphabetically within Groups; Group Leaders in bold type):