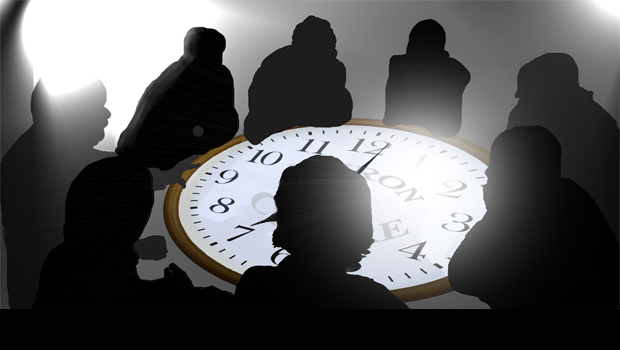 Readers of the Enquirer who are committed to openness and transparency in local government may be shocked (though hardly surprised) to learn that Councillor Mike COCKERILL [Ind.], Scarborough Borough Council’s Portfolio Holder for Project Leadership, Harbours and Coast & Flood Protection, has been instrumental in arranging a ‘special’ meeting of Filey Town Council to be held ‘behind closed doors’ at the Evron Centre in Filey on Monday 17th July at 7:00pm:

I confirm the verbal offer I made on behalf of the Leader and all members of the SBC Cabinet.

Of the dates you offered, Monday 17 July at 7.00pm at the Evron Centre would be the most convenient.

Notes can be taken at the meeting but before being placed in the public domain would need to be agreed by those attending on behalf of both authorities.

A jointly agreed Press Release would be published ASAP following the meeting.

The original offer was that no SBC officer would be in attendance but the Clerk of FTC could attend. However, when I put the offer you mentioned that the Town Clerk, as he has only come into post today, would welcome the presence of your Deputy Town Clerk to assist with the taking of the notes.

You also suggested that Jim Dillon should be present as the vote of No Confidence also referred to him.

I am in contact with Phil Armitage with a view to booking the Conference Suite for the meeting.

I hope this offer in acceptable and I await confirmation.

Of particular note is the opening line:

This, presumably, is a reference to the verbal offer extended by Councillor COCKERILL to FTC members at the meeting of Wednesday 14th June 2017, as minuted under 294/017: 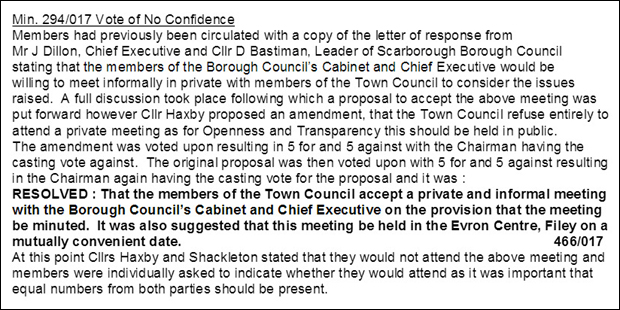 Following the two most recent meetings of Scarborough Borough Council and the disgraceful handling of the SBC No Confidence Motion, I was astonished and disappointed to learn that Filey Town Council’s new Mayor (Chairman), Council Richard WALKER, should have determined to cast his vote to sway an equally divided Council in favour of a meeting ‘behind closed doors’ with the Cabinet and Mr DILLON.

I was equally disappointed to learn that the then Clerk, Mrs Gina ROBINSON (who has now been replaced by Mr Tom CLAY), failed to advise Councillors against acquiescing to Councillor COCKERILL’s invitation of behalf of the SBC Cabinet and CEO and thereby committing to engaging in an unlawful act.

I commend Councillors John HAXBY and John SHACKLETON (who, readers may remember, respectively Proposed and Seconded the FTC ‘No Confidence Motion’ (carried by 12 votes to 1) back on Monday 13th February 2017 (yes, it really has been dragged out for half a year) for making a stand on the fundamental democratic principle of openness and transparency. But I am saddened to learn that the elected members of Filey Town Council, having voted 12:1 in support of a motion of No Confidence in the Cabinet and Mr DILLON, are now willing to collude with the very people in whom they have No Confidence to hold a meeting ‘behind closed doors’. They are seemingly afraid Ilike their colleagues in Whitby) that their Motion has terminally alienated the entirety of Scarborough Borough Council, which was never the case.

And I was astonished to learn that a Councillor of Mike COCKERILL’s experience (at Town, Borough and County level) could be unaware that there is no such thing as a “private and informal” meeting of any Council or Councils, because all Council meetings, without exception, are required by law to be open to press and public. In fact, I struugle to believe that Councillor COCKERILL was ignorant of that fact; it is more likely, in my view, that he new exactly what he was doing.

I was far less astonished to learn that neither the SBC Leader Councillor Derek BASTIMAN [Con.] nor the SBC Chief Executive and Head of Paid Service, Mr Jim DILLON, being fully aware of Councillor COCKERILL’s machinations, appear to be perfectly willing to take part in a meeting which they must surely know to be unlawful; legal requirement has seldom presented any impediment to their nefarious strategies.

So I have written to Filey Town Council to caution members against acting ultra vires (beyond legal authority):

Forgive me, but I am uncertain as to which of you, in point of law, is presently the Clerk and Responsible Financial Officer of Filey Town Council; therefore I address you both. (My apologies to you, Gina, if I am raising a matter of no further relevance to you). Please note that I have copied Mrs DIXON into this email.

It has come to my attention that the Council proposes to hold a meeting, in camera, on the evening of Monday 17th July 2017 at 7:00pm at the Evron Centre in Filey, for the express purpose of engaging with the Leader and Portfolio Holders of Scarborough Council and Mr Jim DILLON, Chief Exec and Head of Paid Service of that authority.

For it to do so would entail breaches of the Local Government Act 1972 and the Public Bodies (Admission to Meetings) Act 1960. Mrs DIXON will no doubt confirm details.

(Interestingly, I was first made aware of this by Mr Ian ANDERSON, Mrs DIXON’s predecessor).

I would expect you both to be aware that no meeting of Council may take place in camera, save for those specific Agenda Items for which exemptions are provided in respect of Staff/HR issues and/or matters of ‘commercial sensitivity’.

By law, there is no such thing as an ‘Informal’ Council Meeting. You may find the following reference helpful:

You should also be aware of the Openness of Local Government Bodies Regulations 2014:

Councillor Mike COCKERILL [Ind.], who has been instrumental in negotiating this bizarre attempt to circumvent the public interest, knows this only too well, having been exposed attempting to convene a similarly illegal meeting in the past:

With all due respect to all concerned, I require your immediate assurance that the proposed meeting does not take place. Thank you.

I would be grateful if you would all be so good as to provide a ‘read-receipt’ to this email. Thank you.

Is it really any wonder that scarcely a soul in the Borough of Scarborough, with the exception of the members of the Scarborough & Whitby Conservative Association, has so much as a milligram of confidence in arguably the most secretive shower of self-servers in the country?

Residents of Whitby have not been slow to recognise the fact that three of these secrecy-obsessed Portfolio Holders were elected to represent their town – Councillors John NOCK [Con.],  Joe PLANT [Con.], and Sandra TURNER [Con.].

Their names are now mud around the town. In particular, Councillor Sandra TURNER, who has twice in the past resigned her seat when serving as an Independent Councillor (before switching to the Tories when the Independents’ prospects looked poor).

At the 2015 elections, Councillor TURNER crept into office by a measly 5 votes. She is now reputed to be mortified by some of the opinions currently circulation; Cabinet membership has tarnished her once positive reputation. One would like to think that any hope she may have entertained of standing aside in favour of Councillor Phil TRUMPER [Con.] will have been terminally scuppered by the latter’s appalling escapades in the Twittersphere. (Then again, Councillors CHATT and NOCK openly defended predatory paedophile (beg pardon; hebephile) Peter JACONELLI – another exemplary Conservative – without being excluded from Cabinet duty).

Notwithstanding all the secrecy and skullduggery, this Cabinet is destined sooner or later for the scrap heap (if Councillor MALLORY will excuse the pun). 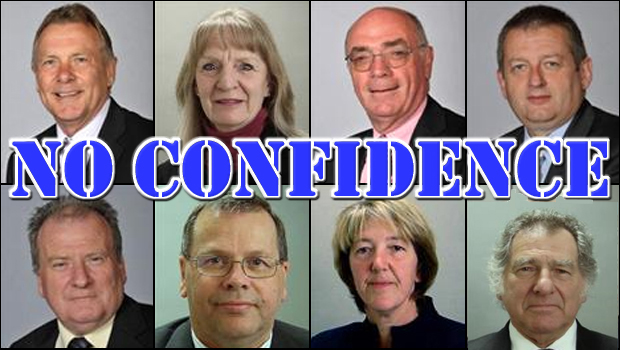