A Letter to the Editor from TIM HICKS, commenting on abuses of the Protection from Harassment Act 1997 to silence the sentinels whose scrutiny keeps our public servants on the straight and narrow.

I write concerning the photoon below, which I think is one of the more important ones you have published. 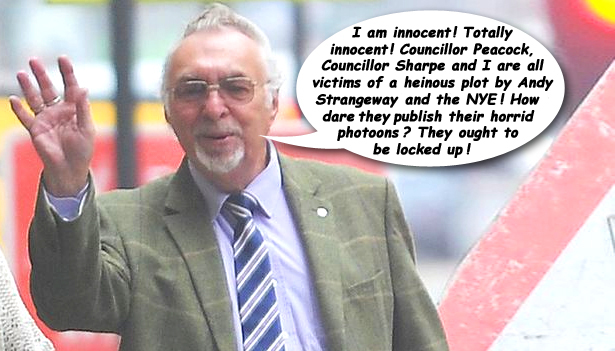 The photoons use satire for a serious purpose. They make an underlying important point (albeit in a humorous way). However, I am concerned that the point may not be fully clear on this occasion. Therefore I would like to take this opportunity of elaborating upon it.

This photoon refers to two issues:

Briefly, Councillor Strangeway is committed to probity in public office – as is the NYE. He has his own website and has used it to criticise some ERYC Councillors and some aspects of ERYC Council policy, including (but not limited to) Councillor Stephen Parnaby, Councillor Jonathan Owen, Councillor  Dominic Peacock over his despicable comments on murdered MP Jo Cox, and Councillor Dee Sharpe for non-payment of Council Tax. He has also subsequently commented on Councillor Hodgson and covered his case for the NYE. All of these Councillors are from the Conservative Party. Like the NYE, he uses satirical photoons to make his point. 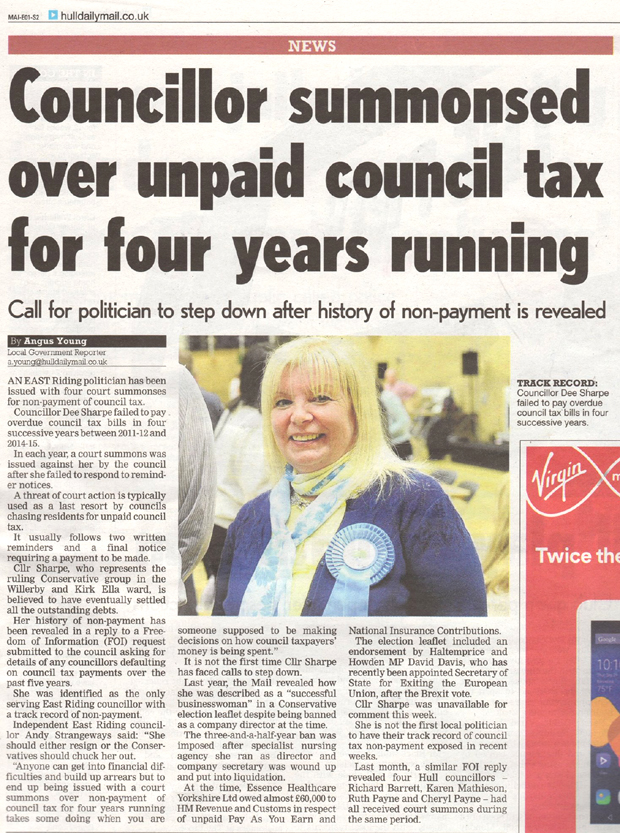 His criticism resulted in Councillor Strangeway being contacted by Humberside Police and asked to attend at a police station to have a Police Information Notice (PIN) (also known as a harassment warning) served on him. A PIN is the first step in a police harassment prosecution. It is issued to establish prior to any prosecution that the alleged harasser has been notified of the allegation, is aware that his conduct is alleged to be criminal and has the opportunity to stop, in order to prevent a possible prosecution. It also establishes an ongoing course of criminal conduct to support a prosecution.

Interestingly, the complainant was an unnamed ERYC Councillor complaining about featuring in two of Councillor Strangeway’s photoons. All the above mentioned Councillors came from one party and it seems a valid deduction that the Councillor concerned did not act in isolation from his colleagues. Indeed, he would have had to discuss and agree this course of action with fellow Councillors from his party beforehand, because it relates to his activities as a Councillor carrying the Conservative party whip.

Councillor Strangeway was not told which Councillor complained to the police. Therefore, he would have to cease all criticism of all these Councillors to comply with the terms of the PIN. Because any act subsequently complained of could constitute harassment and trigger a prosecution, this would include not just photoons, but also, potentially, comments on his own website, comments in the NYE and in Council meetings. In short, a Councillor was trying to anonymously use the police to arrest another Councillor and prevent lawful criticism, to impose a blanket ban on all criticism of Councillors from his party upon Councillor Strangeway.

Eventually. Humberside Police backed down and declined to proceed with the investigation, effectively conceding that Councillor Strangeway had committed no offence and they were not acting lawfully. Full NYE report here.

It is clear that Humberside Police exceeded their powers. It is not clear to me why it chose to do this. It appears to me that there are two options:

I am in no doubt that option one applies here, not option two. The principles underlying Councillor Strangeway’s case are:

To be fair to Humberside Police, as soon as the wider implications of serving a harassment order on a politician over photoons became clear, it appears to me that they realized they were in the wrong. They then did exactly the right thing and refused to proceed with any further action. An honourable and appropriate response. Conversely, with Operation Bohan, the City of London Police chose not to back down. It pressed on with an unsound harassment prosecution, with the inevitable and humiliating outcome of a failed prosecution, and widespread public and parliamentary condemnation.

Political Neutrality of Journalists and the NYE

I would also like to take this opportunity of raising the issue of political neutrality of journalists, which I believe is related.

For the journalists to effectively hold politicians and public bodies to account, in my opinion they must be politically neutral.

According to the NYE home page:

“The North Yorks Enquirer is an internet news magazine covering local, regional and some national news. It provides a forum for citizen journalists working in the public interest to expose wasteful spending, malpractice and corruption in authorities around North Yorkshire and beyond.”

This mission statement is clear: the NYE exposes wasteful spending, malpractice and corruption in all public bodies, not just those that are led by one specific party.

To remain effective, the NYE must retain this politically neutral stand. In my opinion, it does this. However, it is unfortunate that many of the stories it has covered have predominantly involved Councillors from one particular party. This is regrettable. Nevertheless, it does not indicate that the NYE is politically biased. I think it simply reflects the political make up of Councils locally and the way current events that the NYE covers have evolved.

The NYE criticizes politicians of all political persuasions, impartially. It also publishes material received from local politicians of all political persuasions, making it clear whether or not they are Councillors and if so, which party (if any) they represent. Because it is easily accessible in a way that the traditional print media is not, it has become a platform for criticism of Scarborough Borough Council. A classic example is the recent criticism of the Council’s attempts restrict debate on WHEXIT and other issues:

“In the past two weeks, we have witnessed concerted efforts in SBC to shut down debate, to negate the opportunity to express opinion and to reduce the Council Chamber to the status of being not fit for democratic purpose.

Of course, that purpose should be to allow the people (all of us) access to debate, no matter what political persuasion. Voltaire is famously attributed with saying words to the effect, “I disapprove of what you say, but defend to the death your right to say it.” [Councillor Rob Barnett]”

Under these circumstances, local media have a duty to publicise the situation and hold local Councillors to account. By acting as a forum to raise these issues, the NYE has improved local democracy by ensuring that the issues are aired and available to the public, despite the efforts of SBC to prevent this. That is not political bias or harassment. It is a free and vibrant local press in action.