In what appears to be a vindication of the matters raised by Cottingham developer Mr Peter ROBINSON, ERYC Leader Councillor Stephen PARNABY [Con.] has now provided a declaration on his Register of Interests that includes his Directorship of Arvarto Government Services Ltd – a position held for around 12 years.

This declaration finally confirms the observations made here in the Enquirer on 25th May 2017, in which Councillor PARNABY’s Directorship in Arvarto Government Services Ltd was registered at Companies’ House, thus:

Eyebrows must now be raised over CEO Caroline LACEY’s assertions to Mr ROBINSON that Councillor PARNABY was “not and never has been a director of Arvarto Ltd” – which was, to my knowledge, never alleged; unless one considers the word ‘Arvarto’ in isolation to mean Arvarto Ltd, or some other member of the Bertelsmann group, as opposed to Arvarto Government Services Ltd, which was always the company at the heart of the non-declaration allegations (as shown, above), now conceded by Councillor PARNABY to have been well-founded.

It is now apparent that Caroline LACEY was being “economical with the truth” in her correspondence with Mr ROBINSON.

In my view, it is not acceptable that the Head of Paid Service of a local authority should circumnavigate the truth in this way, especially when the nature of the allegations had been so plainly stated (and widely circulated) by the complainant.

In my view, Mrs LACEY’s position is now untenable. 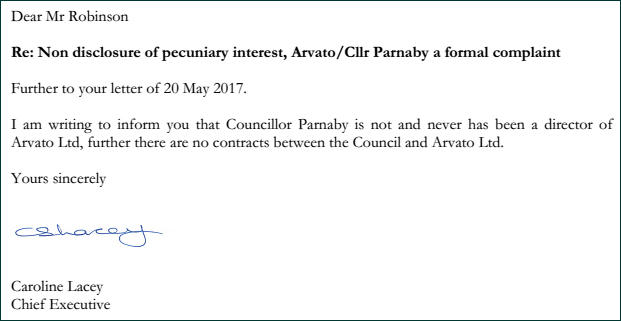 Similarly, questions are sure to be raised as to why ERYC Monitoring Officer Mathew BUCKLEY has not previously ensured that Councillor Stephen PARNABY [Con.] was in compliance with s.31 (and other provisions) of the Localism Act 2011 – a task at the heart of his remit. Incidentally, ERYC is presently refusing to process my own Formal Corporate Complaint against Mathew BUCKLEY in respect of his departures from the terms of the Council’s Constitution. And he is also under scrutiny in respect of allegations of an astonishing breach of the Data Protection Act 1998.

Readers may recall Mathew BUCKLEY’s own email of 13th April (shown below), with its reference to allegations of “…collusion over many years between councillors and senior employees…”.

Certainly, Mr BUCKLEY – and, for that matter, Ms LACEY – can now expect to be called upon to defend any putative suggestion that Councillor PARNABY evaded declaration of his disclosable interest in Arvarto Government Services Ltd with the tacit knowledge and possible complicity of “senior employees”. 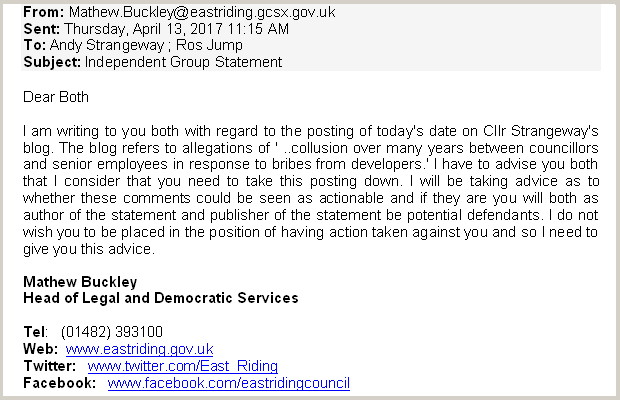 Mr BUCKLEY’s email referred to a Press Statement published by the Independent Group at ERYC. It reads:

It may have been salutary for Mathew BUCKLEY to respond to my email of the same day seeking clarification of his email to Councillors STRANGEWAY [Ind.] and JUMP [Ind.]. 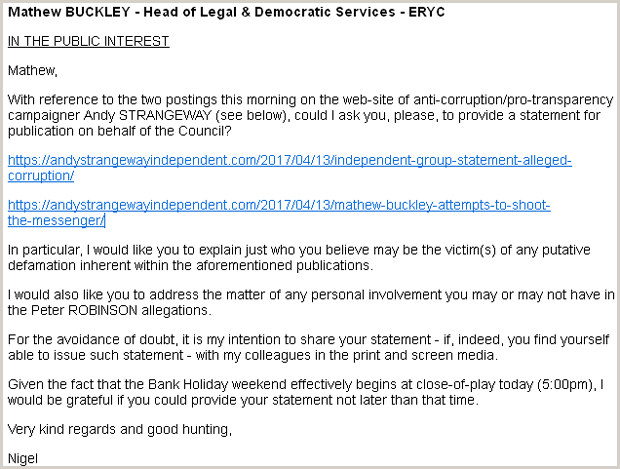 However, and one might add needless to say, Mathew ‘Bluster’ BUCKLEY did not respond.

With all of this in mind, one could be forgive for speculating that both LACEY and BUCKLEY have failed in their respective duties to uphold not only the standard of moral probity which members of the public are entitled to demand from their paid and/or elected public servants, but also to uphold the requirements of the Localism Act 2011.

From public servants drawing, between them, £¼-million per annum from the public purse, this is simply not good enough.

Readers will find the following web article helpful in achieving an understanding of the legal implications of Councillor PARNABY having failed to declare his Directorship in Arvarto Government Services Ltd [use the ‘+‘ sign, top-centre of the PDF, to enlarge the text]:

This may not be the end for Councillor PARNABY.

It may not even be the beginning of the end.

But it is beyond the end of the beginning . . .

Furthermore, the Enquirer is this morning in receipt of additional documentation/correspondence on this topic which, pending legal advice, it is intended will be published in the near future – a future which looks increasingly bleak for Stephen PARNABY, and a lot less than rosy for some of his colleagues.

Clarification on the matter of Councillor PARNABY’s declaration has been sought from ERYC Chief Exec Ms Caroline LACEY who, unfortunately, was not available for comment. So it goes . . .

The final paragraph of that Independent Group Press Release (cited above) is well worthy of repetition:

“If there really is nothing to hide, and hopefully that is the case, we should all support and welcome an independent investigation by an appropriate authority. If we do not do the right thing we will be rightly perceived as champions of corruption.”

Every Councillor of ERYC should now consider living with the soubriquet “Champion of Corruption”.

If that sits ill, Councillors, then now is the time to state your positions. Do you have confidence in Stephen PARNABY? In Caroline LACEY? In Mathew BUCKLEY?