SBC: A Plan With A Silver Lining? 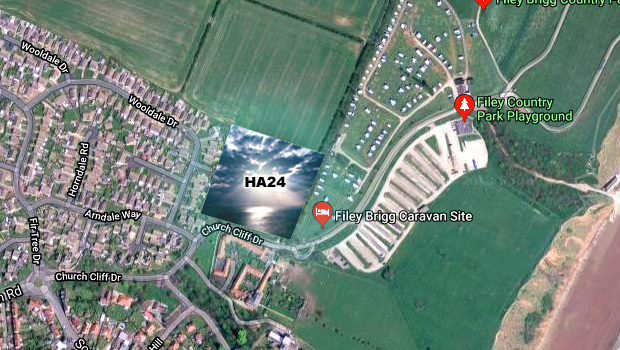 SBC: A Plan With A Silver Lining?

Regular readers of the Enquirer will be aware of the previously featured letters – “NO to HA23 Filey” and “Groundhog Day in Filey”.

A quick reminder of why those letter were sent in:

This first letter to the editor from 80 residents of Filey, protesting bias and incompetence at Scarborough Borough Councils Planning Department.

This letter highlights the frustration of Filey residents in being perceived as NIMBY’s and thus summarily ignored by SBC.

The second letter covers the concerns that the community of Filey have over the Scarborough Borough Council’s adopted new Local Plan 2011-2032 and the inclusion of the Housing Allocation HA23, now designated HA24.

This letter concludes by stating:

“Surely those making the decisions at the local level should take their remit from central government, but that means they respect the regulatory frameworks in place. SBC Officers have a legal obligation to follow and not amend or abuse their position or their interpretation of the framework to meet their own needs”.

The Application with which we are concerned can be viewed here: 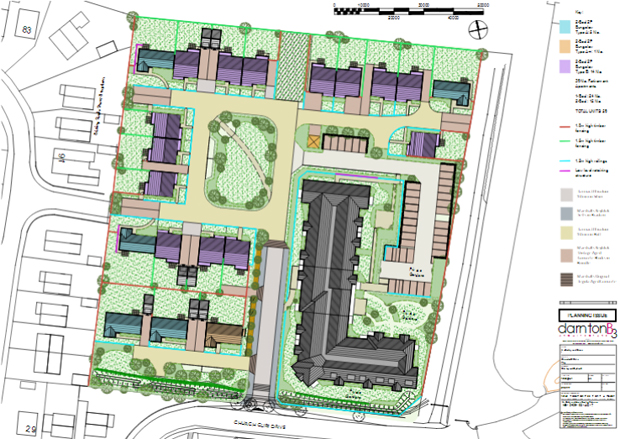 McCarthy & Stone Living Lifestyle Ltd’s representative consultants – The Remarkable Group – invited Filey Town Councillors and only those residents residing adjacent to the site to a pre-planning ‘one-on-one’ consultation, by appointment, held at the Evron Centre in Filey on Tuesday 3rd October 2017.

This ‘one-on-one’ session appears merely to have been a fact-finding mission for The Remarkable Group – a finger, so to say, on the pulse of public feeling. What they learned was that the volume of objections was sure to be exceptionally high.

The feedback responses are listed in the McCarthy & Stone – Statement of Community Involvement (SCI) supporting document in the Planning Application SBC 17/02734/FL.

[SCI – Ref: Pre-application consultation points raised more than once by respondents to the question ”Do you have any comments on the design and layout of the proposal?”]

[SCI – Ref: 4.3 This section states “there exists no regulations which will limit the height of new buildings in Filey”. However, there are site-specific regulations contained within the Housing Land Selection Methodology Assessment  (HLSMA) May2016 by Scarborough Borough Councils Conservation Officers’ Appraisal which does limit height of buildings specifically on this site.]

A 67% objection on a pre-planning consultation is surely high in anybody’s book.

Presently, it will become clear why this high level of objection obtains.

The proposed plan shows 20 bungalows and a large L-shaped apartment block with accommodation on 2 levels containing 39 apartments, with some accommodation in roof-space (described as one-and-a-half levels) to the frontage on Church Cliff Drive – a total of 59 dwellings. The site map is displayed here: 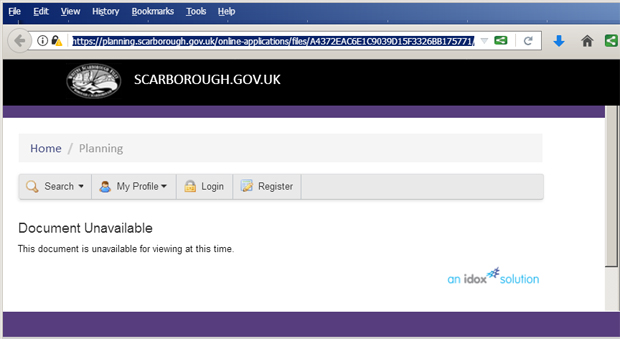 There goes our old friend Transparency – burying his head again.

It is clear from the planning history documentation for this site that it has been considered for new housing delivery on a previous occasion. However, both Scarborough Borough Council and The Planning Inspectorate determined that the site “is not appropriate for housing development”.

Moreover, there have been, in the interim, no material changes to the site in terms of its suitability for development, and the same grounds for refusal of application for Planning permission remain applicable to this current application 17/02734/FL.

“For development here not to have adverse effect on the heritage assets it needs to be one of three alternatives”. [Please note the emphasis in bold type].

Church Cliff Farm is a listed building located to the south of Church Cliff Drive. The Borough Council’s Conservation Officer has considered the impact upon the heritage assets and concluded as follows;

Alternative 2 – An enclosed courtyard or terrace of single storey development with tall brick walls to small private yards to reflect the 1989/90 development south. Car parking again and vehicular access again to be sited to the north of the development”.

Alternative 3 – An open U or L shaped courtyard with a communal green area with trees facing south. Car parking again and vehicular access again to be sited to the north of the development. There may be potential for this to be sheltered or other managed residential accommodation.

Subject to the above requirements, which are considered to satisfy Para. 126 of the NPPF, in making a positive contribution to Local Character and distinctiveness, the site is considered suitable for development.”

Despite the SBC Conservation Officer setting out three distinct and separate alternatives for development on this site, this amended latest proposal advances a new (fourth) alternative – a conflation, perhaps, of two of the original three alternatives. (i.e. bungalows and a large L-shaped 2-storey apartment block – see image, above).

This does not conform to the numerically acceptable development requirements as set out in the HLSMA, which states:

With reference to over-development, this new proposed plan includes a total of 59 residences (20 bungalows and 39 apartments in a 2-storey block), virtually doubling the original proposal.

Even McCarthy & Stone objected to this site at the Draft Local Plan Stage.

They declared ‘NO’ to the legal compliance and soundness. The reasons given? ‘NOT justified or consistent with National Policy’.

This objection highlights the issues, constraints and the conflicts connected to this site, the consequence being that the proposed plan has been virtually doubly over-developed, presumably in order to make it financially viable – or just more profitable? 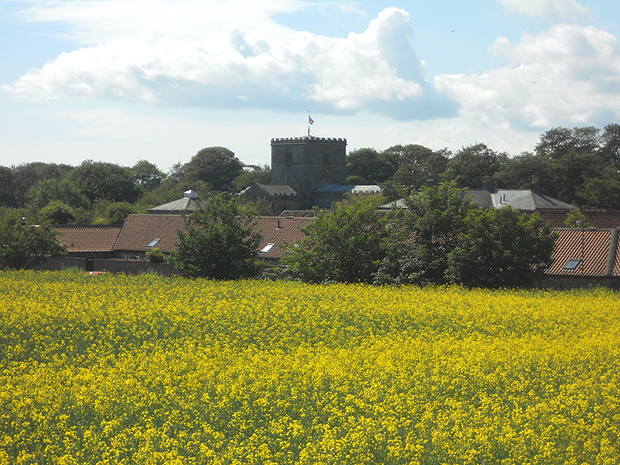 Aims of the Local Plan

There is also conflict between the proposed plan and the adopted Aims of the Local Plan:

To achieve the vision in a sustainable manner, support will be given to achieve the following Local Plan Aims:

“A scheme comprising bungalows may be the most appropriate option for this location”.

The foregoing offers a reasonably detailed overview of the proposal, its apparent lack of merit and some of the reasons why SBC Planning should be kicking the Application into the long grass, instead of jollying everyone concerned into swallowing it whole – in fact, swallowing a virtual double portion of it.

Readers who feel I have laboured the point can summarise the foregoing in one sentence:

What is clear, however, is that the Council, led by Cabinet Portfolio Holder for Major Projects, Lands, Harbours, Coastal & Flood Protection, Councillor Mike COCKERILL [Ind.Ind.], is determined to carry through the development, regardless of its unsuitability and lack of merit.

By every objective analysis, the McCarthy & Stone proposal is a non-starter. But watch it sail through anyway . . .

We come now (at last) to SBC’s silver lining.

It is important to understand that HA24 falls within the area designated for the Filey Flood Alleviation Scheme.

Immediately adjacent to (and including) the site delineated in the above Planning Application is land set aside for the Filey Flood Alleviation Scheme (FFAS) – an initiative that has been in the pipeline for over 15 years. Funding in the sum of £5.5million has already been granted to SBC by central government (via DEFRA and the Environment Agency, as well as regional flood funding bodies), and Planning has been passed and approved for works to commence. (Works scheduled to commence in March 2017 are now on hold, with no revised date published. Why?).

Filey residents in the immediate vicinity of site HA24 see no extra benefit in development of this area, as everything is already in place for much-needed flood defences to protect Church Cliff Farm properties – an issue of markedly greater priority to local residents. Residential development of any kind – never mind one of almost double the originally intended density – is simply unnecessary and unwanted by local residents.

What residents really want is the original above-ground Filey Flood Alleviation Plan (SBC Plan 15/02657/RG3, Drawing Number PB1154/9005) – already planned, approved and funded to the tune of £5.5million (already in SBC coffers) and waiting to be implemented – to become a reality, before the next flood. Some have questioned how it can be that a scheme essentially comprised of earthworks and sluices can amount to £5.5million.

It is an uncomplicated build and an easy-maintenance design. If any design flaws were to arise, it would be easily accessible (therefore more cost-effective) to rectify, unlike the proposed underground system associated with the HA24 development.

The only overt benefits residents can see with the McCarthy & Stone residential development on this site are:

But there is also a covert benefit – to Scarborough Borough Council.

If McCarthy & Stone (or anyone else) builds and markets the proposed development, the costs of implementing the flood alleviation work covering HA24 will fall to them.

SBC stands to gain the difference between the £5.5million Filey Flood Alleviation Scheme funding (that has already been granted) and the actual costs of implementing the scheme over roughly 80% of the designated area – since the developer must carry the costs of the work within HA24. That difference could be in the order of anything up to £1million.

It may now become clear to Filey residents why SBC has driven this controversial site development hell-for-leather through the Local Plan Process for Housing Allocation. The old, old story – follow the money . . .

The argument that the Council will thereby have ‘saved’ taxpayers up to £1million simply does not wash – not if they do so by riding rough-shod over protocols, policies, site-specific appraisals and the people who live there and the safety (and value) of their properties. The funding was allocated for the benefit of the residents of Filey – not for SBC to plug another hole in its disastrous financial record. Does anyone seriously expect that any grant funding surplus will be ring-fenced for later application to its intended purposes – or even for projects directly benefitting the people of Filey?

The widely-expressed fear is that HA24 is a ‘done deal’.

Residents point to a quote from Councillor Mike COCKERILL:

Speaking to residents, I gleaned that “the landowners” of the HA24 site also hold title to another site of similar size (Property Register), used by the local football club. This, I am told,  has never before been on the market, though many overtures have apparently been rebuffed. But it is now rumoured that the Council will purchase this second site for the open water section of the Filey Flood Alleviation Scheme – in a ‘behind closed doors’ arrangement to the effect that “the landowners” (reportedly controlled by one John Derek Taylor MEGGINSON) will part with the HA24 site, quid pro quo, thus giving the McCarthy & Stone development the green light. 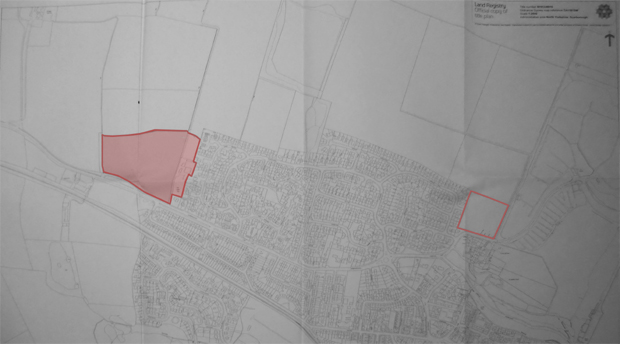 Like the COCKERILLs, the MEGGINSONs are an old Filey family.

There is also considerable disquiet about the fact that Councillor Mike COCKERILL is reported to be the Chair of the Filey Flood Working Group, which some feel sets him in a position of conflict with regard to his rôle as an SBC Portfolio Holder (a man cannot serve two masters). However, this Chairship does not appear in his Register of Interests. Perhaps it should?

One wonders whether prospective purchasers of the 59 proposed residences have been (or will be) informed that, on completion of the Filey Flood Alleviation Scheme (if it ever takes place), they may find themselves residing within a formally designated High Risk Flood Area – with obvious repercussions in terms of property prices, mortgage arrangements and insurance premiums and cover?

If you want to know more about these issues, visit the website www.siteha23filey.weebly.com for more information.

A meeting for the residents, by the residents, is open to the public and will take place on 6th Febraury 2018 at the Evron Centre, Filey. A good time to raise questions. 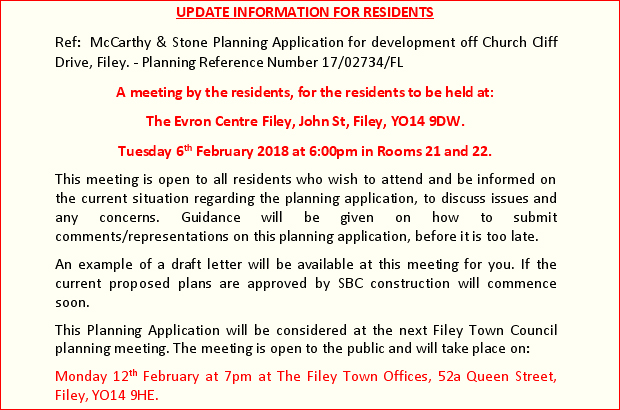